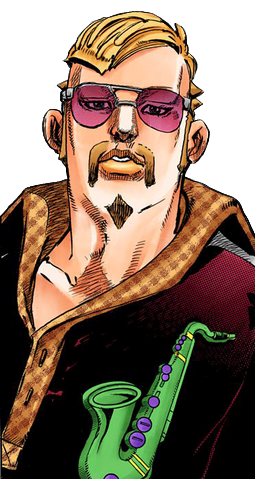 Owner of Damo Can Cleaning service[1] 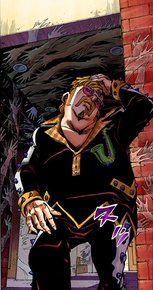 Damo is introduced as an awkward but polite individual when he meets the Higashikata family, notably mumbling while speaking to Norisuke IV and Joshu,[2] insisting on sitting on the guest's seat even if he breaks it,[3] and somehow ignoring when his combover is messed up with.[4] This is later revealed to be a facade hiding a much colder and calculated personality, which he unveils while interrogating Norisuke.

Not much is seen of Damo's everyday activities, but he takes running the Locacaca trade seriously, meticulously ensuring that it goes unnoticed and taking swift and ruthless action when it is threatened in any way.[5][6] His interest in the profit a Locacaca hybrid will bring him even on the verge of death indicates that he does it out of greed.[7]

His power having limited range, Damo's modus operandi is to infiltrate a place where his targets will be trapped in, then plant Vitamin C's handprints all over the place so that everyone will be melting and powerless. Damo enjoys lording over his victims, ordering them around in his position of power but goes rather straight to his point, being focused on his objectives.[8] He also sadistically tortures and humiliates his victims, inserting various common-place objects into them and once videotaping it for his own enjoyment.[9] In contrast, Damo has a tendency to "spare" one of his victims for various reasons, such as self-punishment for being careless or excessive cruelty. Damo has also a penchant for cutting off limbs with a 1,000 yen bill if they do not comply.[10][11]

Tamaki Damo has a short temper, regularly letting out short bursts of anger accompanied by a similarly violent action and insults. Being underestimated, even remotely, such as thinking that keeping information is being hidden or seemingly playing dumb, enrages him.[12][13] However, he can acknowledge one's merits rather easily, praising Kira and Josefumi for managing to steal a Locacaca branch.[14]

Damo is manipulative, seducing Hato with the specific purpose of approaching and interrogating her family and had no qualms with torturing and killing them all, including Hato herself.[15] He has a habit of exploiting possible pressure points such as Josefumi's fundamental lack of interests in helping Yoshikage Kira,[16] Norisuke's love for his family[17] and Hato's affection for her father to gain leverage or an advantage in a fight. With he has no further use for a pawn, like Hato, he's ready to dispose of them and get them out of his way.[18] He has also shown to be cowardly when his life is truly threatened, begging Hato to spare him and trying to convince Josuke they should team up.[19][20] 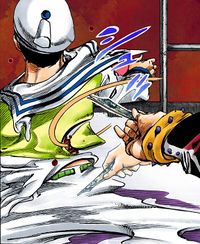 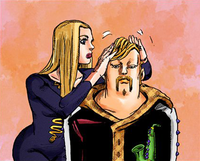 In the present day, Tamaki Damo is introduced as Hato's boyfriend, and from Daiya's explanation to Josuke the first she has ever had or brought home to meet her father. Everyone is taken aback by his appearance, aside from Joshu, who is humored by him and even snatches the man's sunglasses off of his face and undoes his comb-over in reaction to his nervous mumbling. Damo presents Norisuke IV with a box of chocolate yokan he bought from the store near his cleaning company Damo Can Cleaning, while Kei Nijimura and Norisuke IV notice that his fingerprints are left behind on things he has touched and are sticky and wet to the touch, suggesting that he also has a Stand. Nijimura also sees several clawed hand prints left behind him in the entry way, and Joshu is too amused with his family's guest to notice the fingerprints on his own arm. 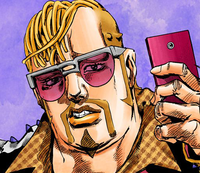