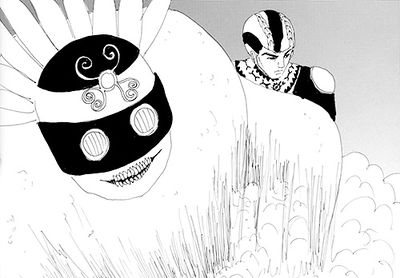 A Bound (バウンド, Baundo) allows an individual to fully combine with an element or environment, or transform into the environment itself. It is a power unique to the light novel JORGE JOESTAR, based on the JoJo's Bizarre Adventure series.

Bounds are similar to Stands but are their own unique type of ability that can rarely develop in people who fully accept the land they live in, allowing them to become one with that land. The only known Bound users are Goyathlay Soundman and later Kars who evolves to learn Soundman's ability, Dune, and makes it his own. Soundman and Enrico Pucci decide to call the power Bound as there are not enough examples for it to have an official name.

Pucci states that it's normal for people throughout history to adapt to their environment. People in the savanna learn to see far across the grasslands, webs grow between the fingers of professional swimmers, and even without such physical transformations, everyone grows accustomed to their surroundings and learns to fit in. The power of a Bound is far beyond that. Bound users don't adapt to the environment, they actually become it. Soundman says that one day his body and sand suddenly came to a mutual understanding and both started absorbing each other. As a result, his body is almost entirely composed of sand.[1]

“
Strictly speaking, my Dune is almost certainly not a Stand, but... Once it gets far enough from my body, it becomes ordinary sand again.
”
—Goyathlay Soundman, JORGE JOESTAR Chapter 10

Like Stands, Bounds may also have limitations in range. Dune manifests as a creature made of sand which Soundman can control and morph, but if it gets too far away from Soundman's body, it will revert into normal sand.