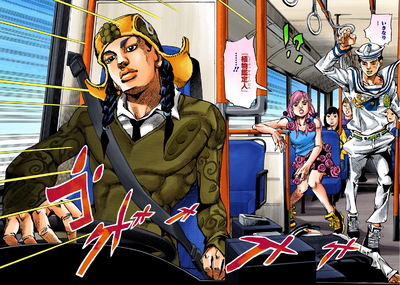 It narrates Josuke and Yasuho's meeting with Rai Mamezuku, the plant appraiser.

Tsurugi Higashikata narrates the story of the Higashikata Family's curse. The land of the Higashikata House is cursed, and the parents of the Higashikata family's firstborn children have been forced to sacrifice themselves for generations. A flashback reveals that Kaato Higashikata broke the tradition by instead sacrificing a bully that Jobin had accidentally rendered unconscious. The bully's corpse was eventually found, and the investigation led to Kaato being sentenced to 15 years in prison that autumn, which she served for Jobin's sake.

Back in the present day, Josuke and Yasuho take a bus to search for the Rai Mamezuku, Norisuke's plant appraiser. Yasuho asks if leaving Dolomite alone is safe, but Josuke thinks that he won't be a nuisance anymore. However, he realizes that Dolomite's speech about the Locacaca was addressed to another group that also desires the Locacaca. Suddenly, the bus driver collapses on the floor as the plant appraiser appears and takes the wheel. The plant appraiser asks Josuke to protect him first and foremost, as they are all under attack.[1]

Mamezuku, an analytical and unpleasant individual, eventually stops in a parking and invites Josuke and Yasuho to a chairlift, revealed to be his home, then cooks them a Romanoff cream. All the while, Mamezuku and Josuke discuss. The enemy is a brand new organization which is surely powerful and desires the new breed of Locacaca, as it allows people to defy death. Because of the enemy, Mamezuku wants Josuke to make his protection the top priority. He is the only one who can find the Locacaca and must be kept safe at any cost.

Mamezuku wants to reach the 8th pole of his chairlift to retrieve something but a tree sneaks on the group and releases a swarm of cube-like Stands who can dissolve flesh and create holes on the body. Josuke instinctively protects Yasuho, which costs Mamezuku his hand. Miffed, Mamezuku throws Yasuho down the chairlift to expose her to the enemy attack and observe their power. Soon enough, Yasuho is attacked by in fact two Rock Humans. One of them human-like and possessing the cube Stands, the other having the form of a treaded vehicle who moves underground and in whom is encased the first foe.[2]