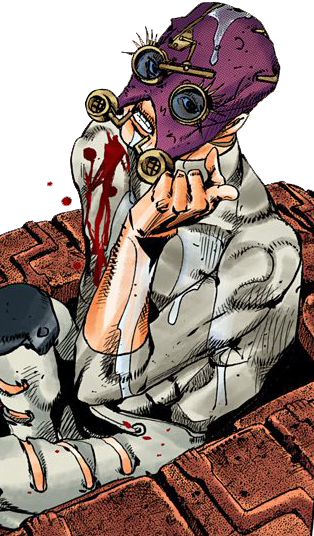 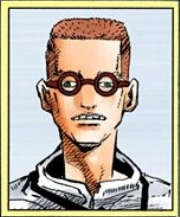 Blown to pieces by Josuke Higashikata

JJL Chapter 110 (Flashback)
“
You people... when you got careless, you ended up being forever below the rocks... the Rock Humans that is!
”
—Urban Guerrilla, JJL Chapter 69: Urban Guerrilla and Doremifasolati Do, Part 2

He is a doctor in TG University Hospital, primarily specializing on gastrointestinal diseases, and the supervisor left in charge to handle the Damokan Group.[1]

Urban Guerrilla is a well-built Rock Human, dressed in minimal clothing. He wears a set of bracers on his forearms and a pair of pants with three vents on the thighs and metal knee guards. Over Urban Guerrilla's head is a complex hood that features a breathing apparatus hooked into his mouth, along with goggles stylized with six-pronged eyelashes and a lens wiper on the left side.

The series is known for alternating colors between media, the information presented below may or may not be canon.
Skin(Fair)
Hair(Ginger)
Eyes(Gray-green)
Outfit
(Purple hood with blue lensed, golden goggles, off-white jumpsuit, black kneepads and shoes.)

Urban Guerrilla is an animalistic Rock Human, grunting and growling while speaking.[5] When stalking his targets, he devises a "killing order" to select who he'll assassinate first based on their threat level.[6] Urban Guerrilla also displays an intense and disturbing side when frustrated, stating to Rai Mamezuku that he'd take his time dismembering and mutilating Mamezuku's body.[5] Despite his brutality, Urban Guerrilla is efficient in his work and intelligent; observing his enemies before attacking and making sure to take needed precautions.[7]

Urban Guerrilla is disdainful of humans and dreams that one day the Rock Humans will stand above humanity, planning to use the new variety of the Locacaca to do so.[8] Despite his specieist views towards human beings, he still praises Josuke as a "marvel of biology" due to Josuke's nature as a fusion between Josefumi Kujo and Yoshikage Kira.[9]

As a doctor at TG University Hospital (specialist in gastrointestinal diseases), it can be inferred that Urban Guerrilla was bright enough to exercise his job or obtain his medical license by himself.[10]