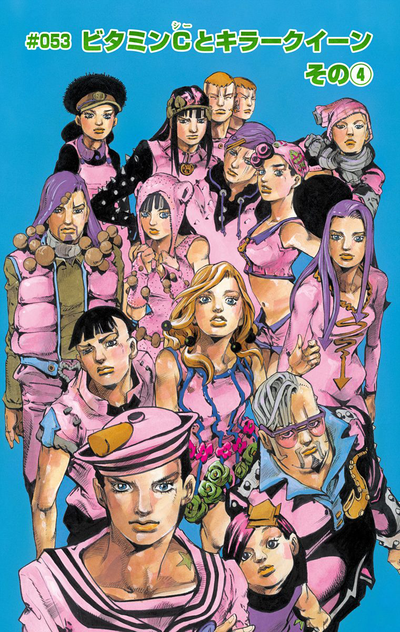 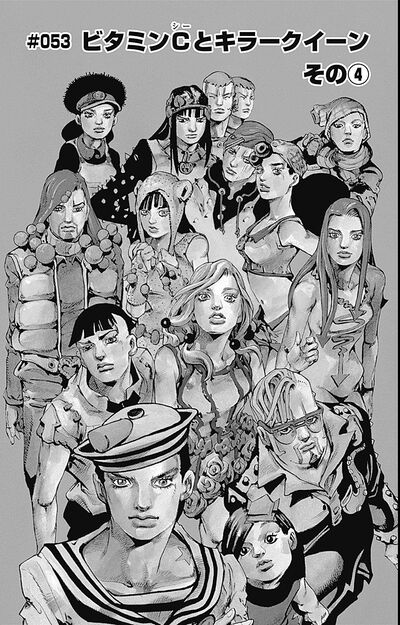 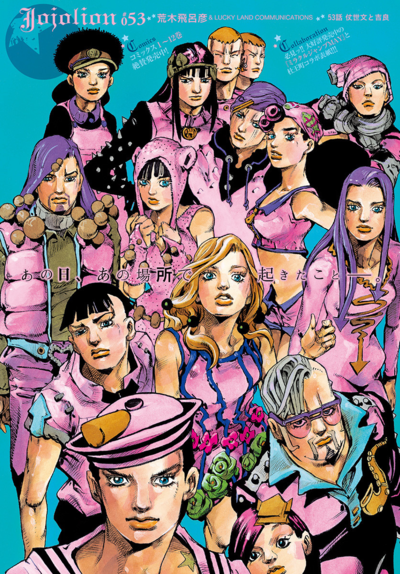 In the present, Josuke tries to push the front door without touching it by using bubbles as protection, but they slip and his hand touches the door. Seeing it melting, Josuke then asks an astonished Hato permission for killing Damo in the living room, and warns Hato not to touch anything, explaining that the man's goal is him and the death of the whole Higashikata Family.

Back in the flashback, Kira's wound has closed, yet he presents no signs of life. Josefumi's ear falls off from his head, and the right side of his face as well as his left hand begin to crumble into stone. Josefumi remarks that the equivalent exchange seems different, but resumes his attempts to wake Kira up. Meanwhile, Yagiyama is walking along the coast, discussing on the phone about aftershocks that happened after the explosions, and the subsequent tsunami warning. Yagiyama finally finds a blood trail, and indicates the far side of the lone pine as the possible location of the duo.

Meanwhile Josefumi has examined the back of Kira's head, and sees several pieces of debris deeply embedded in the cranium; despair takes him as he understands that Kira even protected him from the explosion. As Josefumi turns his eyes toward the second and only fruit left, he sees the A. Phex Brothers approaching him from the forest. The brothers confirm to Yagiyama the location of the Locacaca and go for the kill, the younger brother kicking his ball toward Josefumi. Suddenly the ball floats away, as Josefumi filled it with bubbles, enabling him to break the Rockman's leg with a well-placed kick and repeatedly stomp his head. The elder brother intervenes and arm locks Josefumi, who retaliates by bursting bubbles near a branch so it propels toward the elder brother's head and impales him. Incapacitated, the A. Phex Brothers are then pummeled over the cliff by Soft & Wet. Yagiyama sees them falling off the cliff, and the ground begins to shake.

Josefumi takes the last Locacaca out of the branch, commenting that for an unknown reason, his body parts that touched Kira are being exchanged. Wondering if the effect is due to the ground or the grafting, Josefumi breaks the fruit, telling Kira that he wasn't dragging him into the mess, but that he wanted to serve Holy, seeing her as his happiness. Josefumi then feeds the second fruit to Kira, and touches him to resume the equivalent exchange between their bodies as a self-sacrifice. As the ground begins to open under them, Josefumi remarks that the branch is still healthy and that Kira will need to grow another fruit.

Meanwhile in the Higashikata House, Norisuke and Tsurugi notice the earthquake and go back into the house. The earthquake creates a fissure under Josefumi and Kira, who fall to the bottom of the crevasse. A stray dog picks up a piece of the Locacaca near the spring where Josuke will be found, and the two men lie underground.