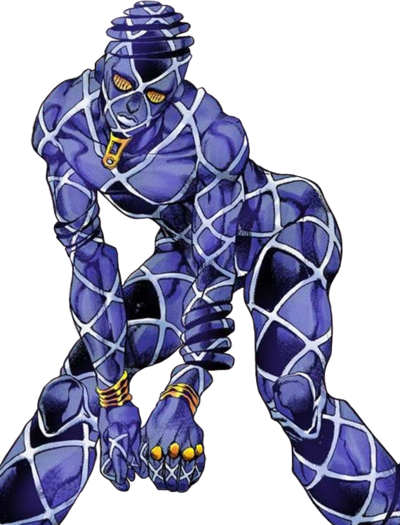 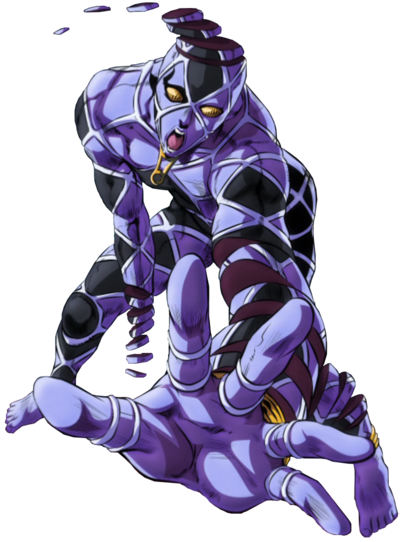 Highway Star (ハイウェイ・スター, Haiwei Sutā) is the Stand of Yuya Fungami, featured in the fourth part of the JoJo's Bizarre Adventure series, Diamond is Unbreakable.

Highway Star is a humanoid Stand possessing several powers that allow it to lure or pursue its victims and drain their lifeforce.

Highway Star is a muscular humanoid Stand with a dark body that is covered in a light net pattern. It has darker spots running down the middle of its legs, chest and head. The ornament on its chin resembles that of a pharaoh's postiche. Bracelets cover its wrists where the checkered pattern ends and continues from its fingers, along with bracelets on its ankles.

When Highway Star splits apart to pursue, it takes the form of an indefinite number of feet that stick to its victims. This body-splitting ability was inspired by the Daruma Otoshi children's game.[4]

Highway Star is a long-range Stand which enables Yuya to control his Stand while he is far away from danger by pursuing his targets using their scent.

Highway Star possesses a disjointed set of powers that makes fighting it a perilous endeavor, and even Josuke has to flee from the Stand to find the user and beat him. Highway Star can run up to 60 km/h and indefinitely maintain that running speed in order to chase after its prey.[5] Moreover, it demonstrates its great range by setting up a trap in Futatsumori Tunnel and pursuing Josuke around Morioh all while Yuya remains in Budogaoka General Hospital.[6]

In order to lure targets, Highway Star has the ability to create an illusionary room.[7] The illusion's appearance is entirely dependent on the person being lured.[3] In Rohan's particular case, he was shown a vision of a man bearing resemblance to Yoshikage Kira killing a woman.[5][7]

Anyone who enters the room is targeted by Highway Star, who then acquires their scent. Once it has hold of its victim's scent, it begins to relentlessly chase them anywhere at a constant speed of 60 km/h.[5]

Highway Star possesses an extraordinary sense of smell which Yuya himself has as well. The Stand can permanently acquire someone's scent and automatically lock onto their position. If the target gets farther away than the 60 km/h that the Stand can travel, Highway Star can vanish and then rematerialize to be in the general location of its victim, no matter how far they get away.[2] Yuya's own nose is subtle enough to pick up and distinguish faint odors. It allows him to guess if a fruit is rotten and even smell someone's mood by the adrenaline they release.[8]

Highway Star can section itself into many slices as it flies at high speeds, breaking apart into flat horizontal segments shaped like footprints that move independently of each other, and then reassembling itself piece by piece.[5] This allows Highway Star to be impervious to physical attacks like punches, slip through narrow passages or do large scale multi-angle attacks by striking with all its pieces at once.[9] However in this state, Highway Star acts automatically and mindlessly follows the scent, allowing its target to temporarily trick it.[6]

Highway Star's main ability is to absorb nutrients from its victims when any part of it touches the target,[10] and then transfer the nutrients to Yuya in order to heal him.[6]

When it sucks out the energy, the victim's skeleton can be seen, and they are left severely exhausted and unable to move or even use their Stand, as was the case with Rohan. Yuya implies that if he wishes, Highway Star can fatally drain a target until they're an emaciated husk.[10] In addition, the life force of Stand users give more energy to Yuya and heals him faster,[8] thus he specifically targets Stand users.