From JoJo's Bizarre Encyclopedia - JoJo Wiki
Jump to navigation Jump to search
This page is a translated version of the page Highway Star and the translation is 0% complete. 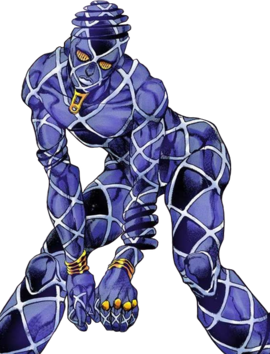 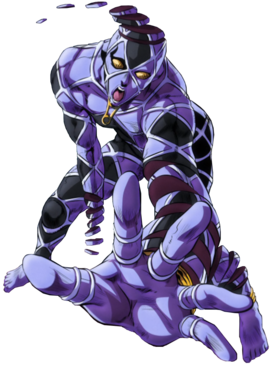 Highway Star (ハイウェイ・スター, Haiwei Sutā) is the Stand of Yuya Fungami, featured in the fourth part of the JoJo's Bizarre Adventure series, Diamond is Unbreakable. Highway Star is a humanoid Stand possessing several powers that allow it to lure or pursue its victims and drain their lifeforce.

Highway Star is an almost naked, humanoid Stand with a dark, checkered body, and an ornamental fake beard on its chin reminiscent of that worn by a Pharaoh

When chasing a target, it splits itself into multiple thin layers of its body, giving the impression of a group of footprints chasing after the target.

In the colored manga and anime, Highway Star is consistently portrayed as being purple and black.

Highway Star relentlessly pursues its prey by following their scent and has no personality, though Yuya's habit of speaking through his Stand can give the impression of sentience.

Two of its basic but most remarkable characteristics are its speed and range: Highway Star can run up to 60 km/h (roughly 37 mp/h) and indefinitely maintain that running speed in order to chase after its prey.[3] Moreover, its chase after Josuke around Morioh while Yuya was in Grape Hills Hospital[4] demonstrates its great range.

Highway Star's first witnessed power is a rather odd ability to create a room and lure victims into it.[5] To do this, the Stand will create an illusion inside the room, its appearance being entirely dependent on the person being lured.[2] In Rohan's particular case, he was shown a vision of a man bearing resemblance to Yoshikage Kira killing a woman.[3][5]

Highway Star's main ability is to suck life energy, or "nutrients", from its victims when any part of it touches the target,[9] and transfer it to Yuya in order to heal him.[4]