A summary of Gyro Zeppeli's history and movesets in video games. 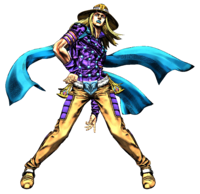 Gyro Zeppeli was one of the first four characters announced for the game, the others being: Jotaro, Wamuu, and Joseph Joestar (Part 2). He is voiced by Shin Ichiro Miki.

As a Part 7 character, three parts of the Holy Corpse appear scattered on stages when he, Johnny, and/or Valentine are being played, which they can pick up to receive blessings that boost their performance in combat; Corpse Parts are obtained by crouching while over them. Along with Johnny, Gyro is one of the only two characters in the game who use the "Mounted" Style. This Style allows him to get on and off his horse, Valkyrie, slightly changing the moves available to him. Gyro must be unmounted in order to pick up the Corpse Parts. Gyro has 900 HP.

ON GROUND
Gyro can summon his horse Valkyrie to mount it, or dismount and send it away, shifting his movement and available abilities. Valkyrie improves his mobility and attack range and power, but receiving knockback will forcibly dismount him.
If the Style input (

) is chained from normals while unmounted, 'Quick Mount' is triggered at the cost of Heart Heat, whereby Gyro mounts Valkyrie much faster and the act of flipping onto his horse can knock the opponent into the air. This provides an easy and quicker method of mounting as well as transitioning Gyro's unmounted combo into a mounted one.
Spin

ON GROUND
Gyro charges the Spin Energy into his Steel Balls, leaving him open to attack but replenishing the Spin Gauge. This skill's function is similar to the "Ripple Breath" skill possessed by all Ripple-Style Users. When filled completely, Gyro enters Golden Spin Mode, increasing the damage of all attacks involving his Steel Balls, and allowing them to hit multiple times per attack, better improving Gyro's overall damage and combo utility. The Spin Gauge is then turned into a set timer, slowly draining to zero, and Gyro is unable to use this ability again until it empties completely.
I toughened my skin

ON GROUND
Gyro places a Steel Ball imbued with the Spin to his chest, causing his skin to wring and toughen at the cost of Heart Heat. This skill is used to instantly block attacks using the Heart Heat Gauge in place of the Guard Gauge, and defends against all attack heights, protecting Gyro from high-low mix-up attempts. It will last as long as the Style button is held, or until the HHG empties.
Saint Corpse's Blessing
Passive
Gyro receives a new blessing for every Holy Corpse Part he holds, but if successfully knocked down, drops the part and loses said blessing.
Special Moves
Spin, spin!

ON GROUND
Gyro throws a Steel Ball forward at the opponent as a projectile, hitting them multiple times. Gyro can throw both of his Steel Balls in succession with a second button press if both are available to do so. (Comboable through Puttsun Cancel)
Raaaaugh!

(unmounted only) ON GROUND
Gyro throws a Steel Ball to the ground as it proceeds to quickly move toward the opponent, carried by the power of the Spin. If it hits the opponent, the Steel Ball will release its Spin energy upward, blowing them into the air. (Comboable)
I'm gonna throw it away!

(unmounted only) ON GROUND
This move can only be used when Gyro has both Steel Balls available. Gyro drops both Steel Balls to the ground, and using the Spin, the two forcibly kick up debris to shoot at the opponent, sending them flying if hit. (Comboable)
Run wild, run free!

(on horseback only) ON GROUND
Valkyrie spins around stomping wildly, hitting the opponent multiple times and knocking them off their feet if hit. This attack can hit a downed opponent. (Comboable through Puttsun Cancel)
Winds from Mexico

(on horseback only) ON GROUND
This move can only be used at a distance. Gyro, applying a Steel Ball imbued with the Spin to Valkyrie's rear, causes his horse to gallop forward at full speed. If the opponent is hit, they are knocked high into the air. (Comboable through Puttsun Cancel)
Scan

(requires at least one corpse part) ON GROUND
Gyro throws a Steel Ball with higher Spin energy at the opponent as a projectile, hitting them multiple times. If the button is held long enough and let go, or until the Steel Ball hits the opponent, the Steel Ball will remain hovering in the air. If inputted a second time afterward, Gyro throws his remaining Steel Ball at the hovering one, causing it to ricochet towards the opponent and deal immense damage.
Throw
Can only spin for a bit!
2 ATK buttons at close range or

ON GROUND
Gyro shoves the opponent off balance, before using Spin energy to form a spinning, compressed ball of air in his hands and blasting them with it.
Heart Heat Attack / Great Heat Attack
One moooore shot!

+ 2 ATK Buttons ON GROUND
Gyro throws a Steel Ball with a large amount of Spin Energy infused into it towards the opponent. If it connects, he'll forcefully throw a second one as the two Steel Balls shred the opponent's face and send them flying. The HHA will automatically retrieve a single Steel Ball upon use, and its damage will be increased while in Golden Spin Mode.
Ball Breaker

ON GROUND
Gyro's GHA can only be performed while mounted, and will automatically summon Valkyrie when used while unmounted. Executing it will also instantly fill the Spin Gauge to full, automatically activating Golden Spin Mode afterward.

Gyro, on horseback, launches a singularly powerful Steel Ball imbued with the power of the Complete Golden Spin Energy. If it lands, the Steel Ball will shred into the opponent's torso, before Ball Breaker appears in front of them. The Stand finishes by spinning and funneling itself into the Steel Ball, dramatically increasing its power and speed. The entrance of the Stand into the Steel Ball shredding the opponent at point-blank range generates a massive green burst.

Gyro's GHA is altered when used against Valentine. Valentine attempts to protect himself with D4C Love Train, only for Ball Breaker to penetrate and fly through the dimensional wall, recreating the scene from the battle in the manga. Ball Breaker will zoom past Valentine and D4C's face, the two bracing themselves, before violently exploding in a blast of Complete Golden Spin Energy.

Most of his alternate costumes are based on manga and chapter covers. Gyro's first taunt makes him smile while saying his catch phrase "Nyo~ho" as the camera zooms in on his iconic grills reading "GO! GO! ZEPPELI" and his second taunt will make Gyro sing his Mozzarella song. 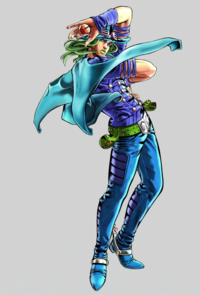 Gyro was announced for the game alongside Johnny, Valentine, and THE WORLD Diego.

Gyro possesses the most Styles out of any character: he is a Stand User, a Mounted Fighter, and is the lone Spin User Style of the the game's playable characters. As a Spin User, Gyro is able to strengthen and enhance the properties of his abilities via the power of the Spin; as a Mounted Fighter, Gyro is able to switch between riding atop Valkyrie or moving on-foot; as a Stand User, Gyro is one of many characters with wildly varied abilities that grant him uniqueness in battle.

Gyro interacts with larger stage objects by trapping them using the Spin, causing opponents that get too close to be blown back a large distance.

In the alternate timeline he is shown to have survived the fight with Valentine and is fighting along-side Johnny against the alternate Diego Brando.

Gyro appears as a support and help character. His supports summon him to throw his Steel Balls at the opponent, inflicting either the paralysis or shocked status effects, and his Help Koma increases the affected battle character's movement speed.

At the time of the game's release, Steel Ball Run was listed as a different franchise separate from JoJo's Bizarre Adventure; Gyro appears as the series' main representative character.

Gyro appears again as a support and help character. While his support attack remains the same, his Help Koma now increases the rate at which the affected battle character's special attack gauge replenishes.