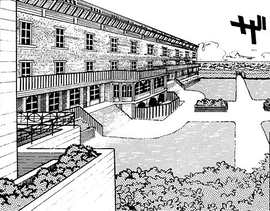 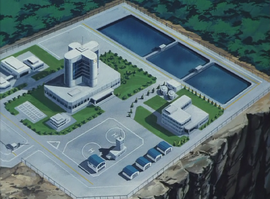 Chemical and Biological Warfare Development
“
It's top secret! For the military's sake, the contents of their research must absolutely never be allowed to leak out!
”
—Baoh Chapter 1: Baoh, the Ultimate Weapon

With connections to the government of the United States of America, the Dress Organization originated in Japan for the purpose of developing special weapons for the military.[1]

The Secret Dress Organization operates unethically, harming innocent animals and civilians for furthering their goals of militarily, medically, and economically dominating the world. The organization operates by killing its own members should they fail in accomplishing their tasks.[1] Dress's existence is unknown to the general public. Its laboratory is disguised as an ordinary medical and biological research facility under the direct control of a pharmaceutical company.[2]

They have great power, wealth, and a wide network of contacts, such as members of the military and hospital doctors.[3] The organization also employs mercenaries and assassins as part of a special agent division.[4] For collecting information, they own a spy satellite which is accurate enough to capture footage of a single fly.[5]

Dress also has brainwashing equipment and various machinery for observing psychic powers, said to be worth five million yen each.[6] 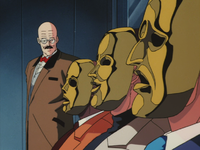 Dr. Kasuminome and the Masked Men

It is unknown who founded the Dress Organization and who its leaders are. However, there are three masked men who have a high rank in the organization as they have authority over Dr. Kasuminome and are in contact with the American government. They give Kasuminome direct orders and fund his research. Their identities are an enigma, as they never take off their masks even when they are with Kasuminome.[7]

Kasuminome is a sub-leader in the organization, having direct control over all of the divisions in Honshu

The research division has numerous scientists employed. They are in charge of researching on animals and developing biological weapons through artificial evolution.

The ESP division kidnaps anyone with psychic powers and brainwashes them into joining their organization.

The Special Agent Division is led by Lieutenant Colonel Dordo. They have a squad of skilled soldiers who specialize in assassination.

Dress has other agents employed who work in the military and guard their laboratory. They utilize artificially evolved neoplasms from the Research Division to assist them.

Dress has a personal black train that is exclusively used for transporting the organization's cargo, which can include explosives, drugs, chemical weapons, experimental animals, food, and living supplies. The train has no destination sign or identification number and runs on the local Tohoku

line. It doesn't follow any timetable and holds the privilege of running freely on the tracks of the Japanese National Railways

A laboratory dedicated to Dr. Kasuminome that is camouflaged in a temple at Kitakami Mountains

. To the public, Kasuminome works as a priest at the temple. Its main shrine has a hidden entrance to an underground facility accessed by a built-in device on the Buddha statue. The light from the Buddha statue scans Kasuminome's iris patterns to verify his identity and then the floorboard opens up to allow him to go underground.[8]

Ikuro Hashizawa was parasitized at this institute, and it is also where Kasuminome parasitized the Baoh Dog to demonstrate his experiment to his superiors.[9] 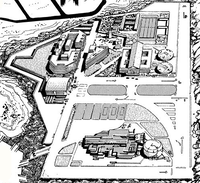 The primary laboratory of Dress is located at Sanriku Coast

. It was established in this location due to several reasons. It is a remote area that is far from civilization, transportation to the coast is convenient, there are several research materials since it is Japan's oldest geological area, and it is abundant with plants and animals.[9]

Many security devices such as surveillance cameras are installed in the surrounding area. When the general public approaches, they are forced to leave as it is private property. No photos are allowed, so if visitors take photos of the area, the camera's film will be pulled out and destroyed. However, Dress compensates for the destruction of property with a lot of money.[2]

A special permit is required to take the exclusive elevator that goes below the fourth underground floor. On the seventh underground floor, there is a quarantine facility exclusively for people with supernatural powers. Sumire is brought here after being kidnapped by Dordo.[4]

In addition, a self-destruct device is also installed which cannot be canceled once activated. A maze-like limestone cave stretches all around the area underground below the laboratory. There are several entrances to the cave along the coast.[5]

In his laboratory, Dr. Kasuminome developed a drug that manipulates the genetic material within an organism's cell nucleus

. After administering the drug to hundreds of animals, his laboratory created severe environments to breed them, such as a room with extremely cold air, a room with limited oxygen, a room with excessive heat, and more. Although nearly all of the animals died, some survived in the harsh circumstances.

The offspring of the survivors formed Neoplasms (新生物, Shinseibutsu) due to artificial evolution.[10]

The Dress Organization originated from the former Japanese military's chemical and biological warfare force. Their research was carried over to Honshu

. During the Vietnam War

created a secret laboratory there for the development of special weapons.

At some point, they kidnapped Sumire from an orphanage after her powers made her aware of a car's license plate that did a hit-and-run in her neighborhood. Dress learned of her abilities and desired to train her for their military intelligence operations.[1] Meanwhile, a boy named Ikuro Hashizawa and his parents got into a car accident elsewhere. The doctor of the hospital they were brought to reported the situation to Dr. Kasuminome, who decided to make Ikuro the first human host for his "Baoh parasite" experiment. Although the doctor didn't want to, another member of Dress purposely killed Ikuro's parents with a drug, planning to cover up their deaths by stating they died in the accident.

Kasuminome planted the Baoh parasite into Ikuro, planning to transport him from Kasuminome's dedicated laboratory to Dress's primary laboratory in Sanriku Coast

Due to Sumire's interference, Ikuro escapes from their train. Thus, Dress dedicates all their resources to pursuing and killing Ikuro along with the Baoh parasite before it could lay eggs and spread to other humans.[8]

They send various assassins and special agents to target Ikuro, but all of them fail and are killed either by Ikuro or by Dress themselves. In the end, Ikuro charges into their Sanriku Coast Laboratory to rescue Sumire. As their last resort, Dr. Kasuminome decides to make the laboratory self-destruct to kill Baoh. Kasuminome dies while trying to escape from an underground cave. With both him and the laboratory gone, Dress loses all of their research. Despite the explosion being a major catastrophe, the incident was only reported to the public as a pharmaceutical company's mishandling of explosive materials. The higher-ups of Dress hides their organization's name from being publicly announced.[5]