Urban Guerrilla and Doremifasolati Do, Part 3 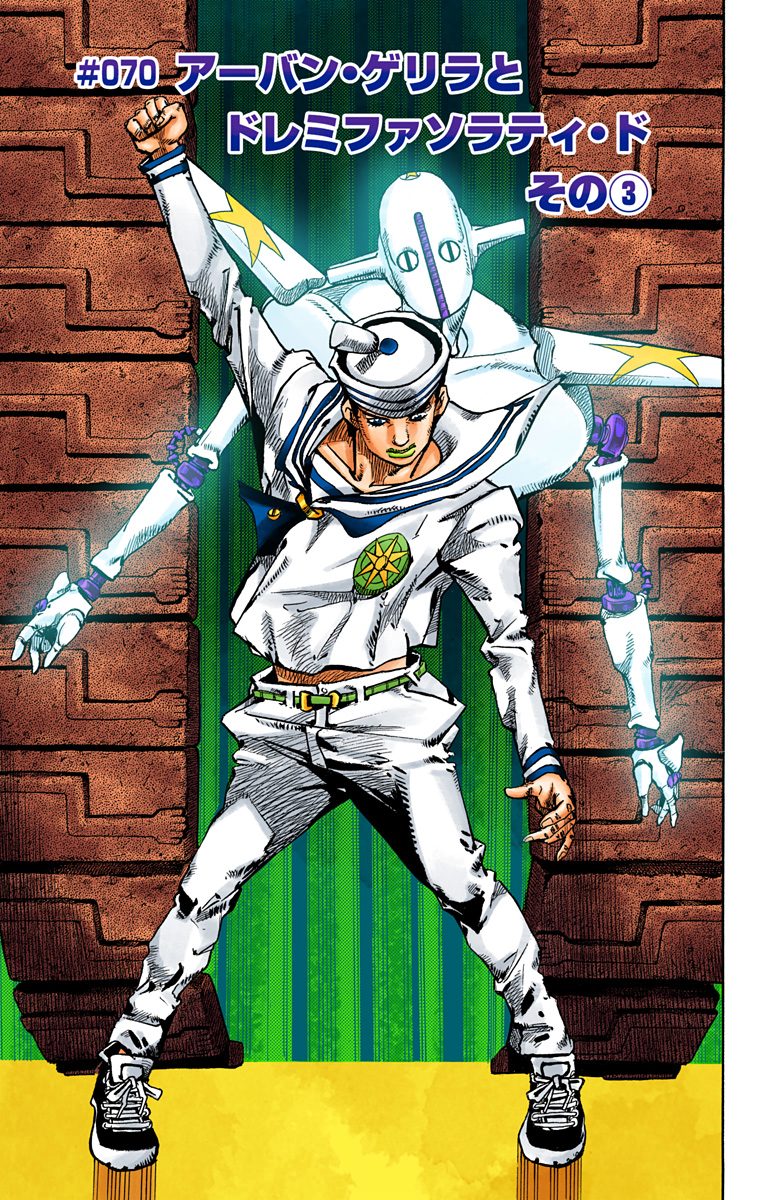 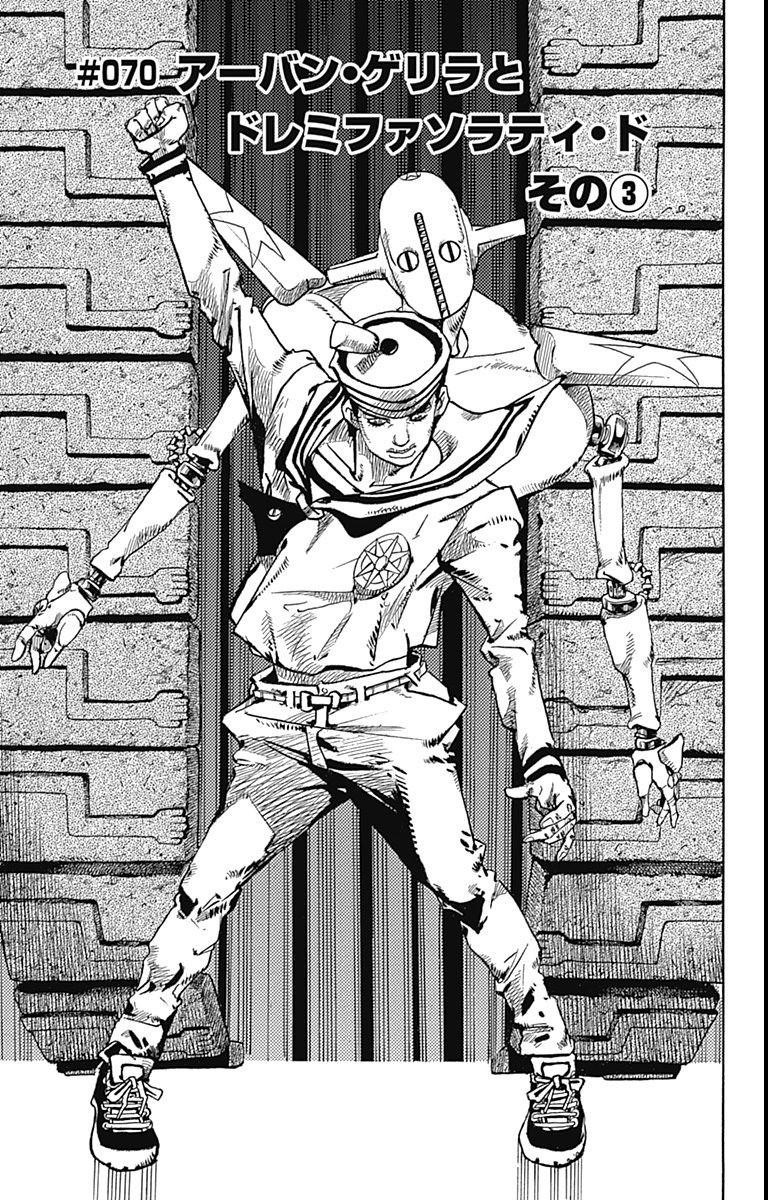 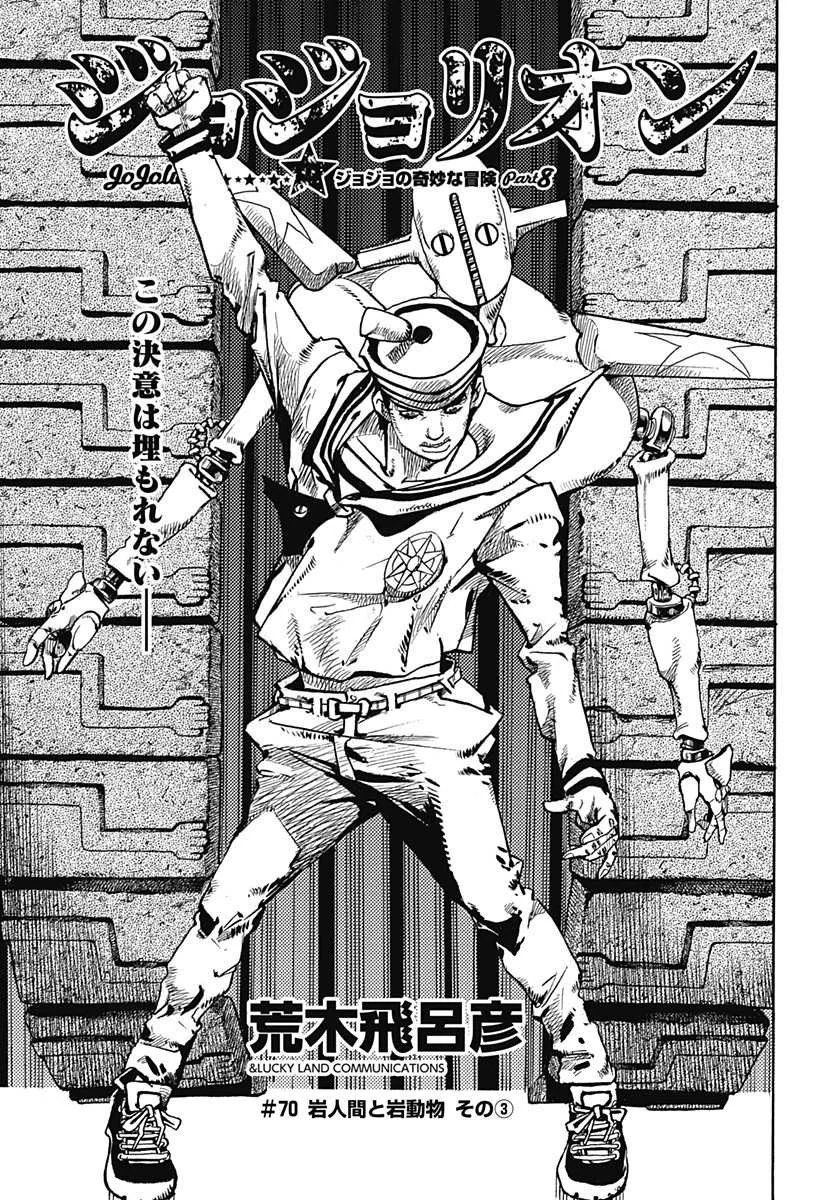 Urban Guerrilla and Doremifasolati Do, Part 3 (アーバン・ゲリラとドレミファソラティ・ド その③, Āban Gerira to Doremifasorati Do Sono 3), originally titled The Rock Human and the Rock Animal, Part 3 (岩人間と岩動物 その③, Iwa Ningen to Iwa Dōbutsu Sono 3) in the UJ release, is the seventieth chapter of JoJolion and the nine hundred seventeenth chapter of the JoJo's Bizarre Adventure manga.

Stuck below Doremifasolati Do's threads, Josuke Higashikata is dragged underground and, at the same time, begins to be attacked by Urban Guerrilla's Brain Storm. Urban again monologues about how in the end, Yoshikage Kira was the "correct" one as his actions led to the creation of a new Locacaca, while Tamaki Damo merely sold the fruit like a drug dealer.

Josuke correctly guesses from Urban Guerrilla's speech that he poses as a doctor among humans, infuriating him. As Urban Guerrilla attacks, Josuke hears Rai Mamezuku from above the ground and sees a strip of him. Looking above, Urban Guerrilla sees that the fork Mamezuku has shot made a hole into the gas tank, and Mamezuku has used himself to guide the leaking gas near them.

Panicking, Urban Guerrilla orders his pet to dive further below and barely manages to close the shell before being soaked in gas; however, Soft & Wet's bubbles pass through the crack. The bubbles pop, releasing the gas and the fire from Mamezuku's lighter, setting the two Rock creatures on fire. Although Josuke wants to interrogate Urban Guerrilla, Mamezuku finishes the Rock Human off before he can have a chance. As the enemy expires, Josuke ponders on the link between Urban Guerrilla, a doctor, and the Kira family of doctors. Meanwhile, Mamezuku examines the bubbles and notices that they are in fact some lines rotating at high speed, uncovering the true nature of Soft & Wet's power.

Mamezuku then invites Yasuho and Josuke to go to the eighth pole of the chairlift. In there, Mamezuku reveals a batch of glass tubes, inside of which he breeds Moth Larvae that will enable Mamezuku to harvest a new fruit before winter.

Meanwhile, Jobin arrives at a parking lot. He tells a kid to go away and play somewhere else and tries to call someone on the phone. The one he is calling is revealed to be the child himself, in reality a short, old man. The man, going by the name of Poor Tom, begins to rant about a woman far away supposedly seducing him, with Jobin wanting to get to the point.

Poor Tom then informs him that he knows that Urban Guerrilla and Doremifasolati Do have been killed; thus, to prevent Josuke from acquiring the branches, Poor Tom plans to close off the entirety of the Higashikata family's orchard with his Stand Ozon Baby, a small LEGO house. Jobin is shocked to have someone openly reveal their ability, but Poor Tom tells him to directly bury the house inside the orchard, explaining that Jobin is considered important and that he neither wishes to be filmed by cameras or harm the Higashikata family because of Ozon Baby.

A car passes by the two. It is the woman Poor Tom was eyeing who drops her cell phone number for Poor Tom, to the Rock Human's satisfaction and Jobin's astonishment.

Author's Note
“
Thank you very much for the JoJo exhibition and everything else this summer. There will be new developments in the future, so please keep an eye out for them.
”
—Hirohiko Araki
“
この夏はジョジョ展など色々ありがとうございました。また、新しい展開もあるのでよろしくお願いします。
”
—Hirohiko Araki