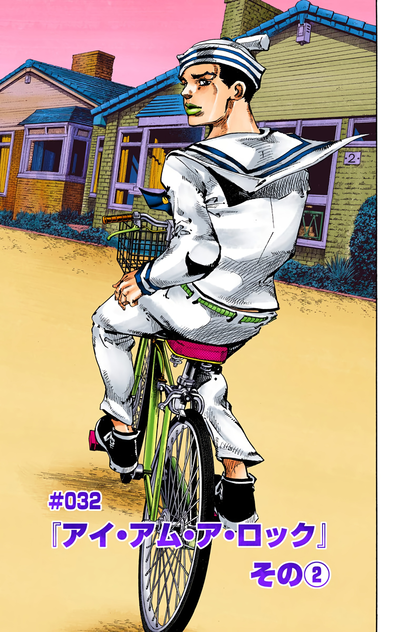 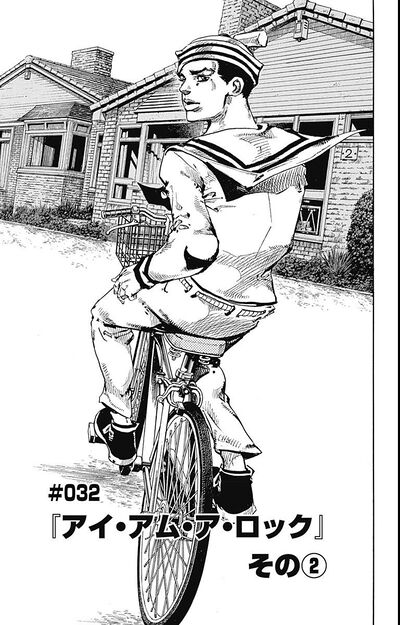 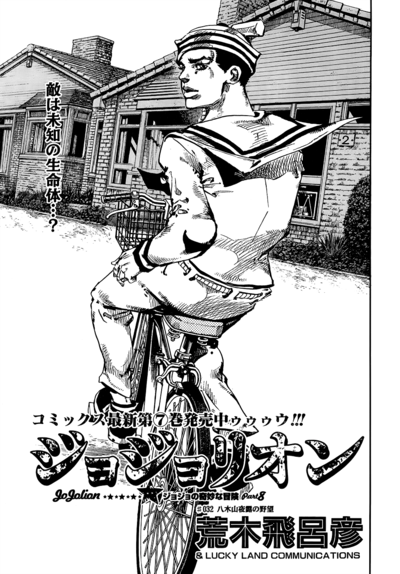 "I Am a Rock", Part 2 (『アイ・アム・ア・ロック』 その②, "Ai Amu a Rokku" Sono 2), originally Yotsuyu Yagiyama's Ambition (八木山夜露の野望, Yagiyama Yotsuyu no Yabō) in the UJ release, is the thirty-second chapter of JoJolion and the eight hundred seventy-ninth chapter of the JoJo's Bizarre Adventure manga.

The pesticide jug strike at Josuke's body and break, enabling the pesticide itself to invade him. Norisuke asks Yagiyama to stop, only for him to declare that he will one day obtain the Higashikata estate and the family's wealth. Yagiyama then comments that Josuke's power is useless against his. He retorts that the soap bubbles are not used for defense right now but for the attack. Josuke then rushes at Yagiyama, pushing him off the cliff into the ocean.

In the water Josuke uses his bubbles to converse with both Norisuke and Yagiyama, asking Yagiyama what his identity is and asking Norisuke to drop fishnets into the water. Yagiyama which has changed into his rock form is then bound with the nets. Josuke then tells him that he now faces the possibility of remaining at the bottom of the water forever if he doesn't answer his questions. In anger Yagiyama replies that he killed Josuke's original self earlier, that Kira saved him, and attacks with I Am a Rock, only to be outpunched by Soft & Wet. Josuke asks him again who he is, but Yagiyama attacks with his Stand. Soft & Wet knocks the architect again, and Josuke asks one last time who he is. Yagiyama instead mutters that he will one day be betrayed by the Higashikatas, and that Tsurugi's actions are the only correct one. Yagiyama's body transforms into rock and breaks down; from a pocket sinks a mysterious fruit into the bottom of the ocean, which Josuke sees.

Josuke returns to the surface with the remains of Yagiyama. Both are amazed at the strange organism they are observing, deciding to analyze it later, and come back to the Higashikata estate with Yagiyama. They see Tsurugi again, who reveals that Yagiyama didn't have bank accounts or cell phone number or even a house, his physiology allowing him to live anywhere. However Norisuke remarks that he must have had an education somewhere and should have companions to take care of him when he was young. Tsurugi then asks about the fruit, and Josuke confirms its existence, having seen it in the water. Deciding that the fruit has a connection to his death, Josuke decides to investigate the fruit further. Meanwhile Yasuho briefly wakes up and discovers a piece of the fruit on her, then goes back to sleep.

Author's Note
“
It just occurred to me, but I hate straws and have never once used them. When I drink with them, it's just awkward.
”
—Hirohiko Araki
“
今気づいたけどストローが嫌いで使ったことが一度もない。ストローで飲むと不味いよね。
”
—Hirohiko Araki