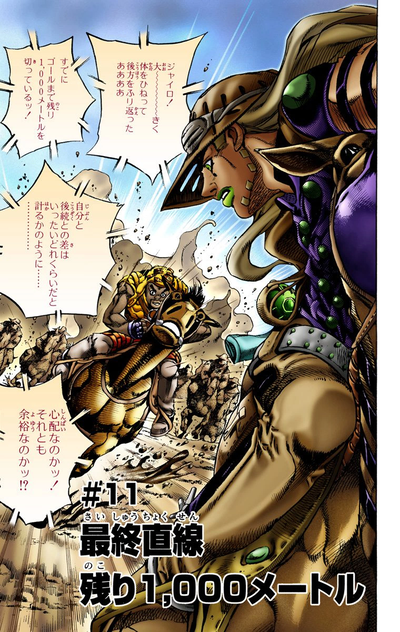 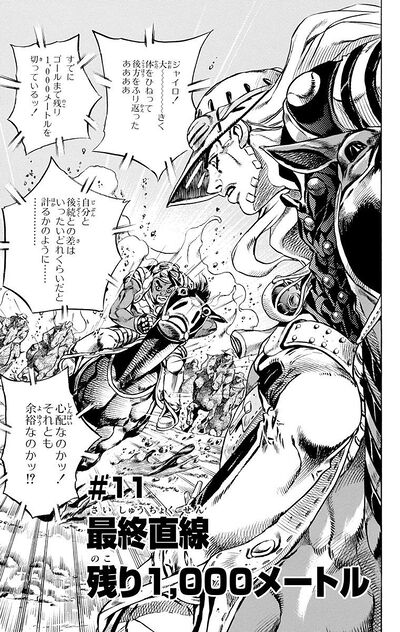 As the racers cut through the Mexican wind, Santana, Gyro glances behind him as he sees Pocoloco and the other racers are catching up to him. Johnny and Diego Brando are evenly matched but Johnny is determined to take the lead. Johnny's horse, Slow Dancer, kicks rocks behind him while speeding up, which allows him to evade Diego's 'windshield attack'. Meanwhile, the horses of some racers have reached their limits and begin collapsing from exhaustion. Diego realizes that technique is useless and he will have to rely on the horse's leg power. As Hey Ya! tells Pocoloco that he should go left, Sandman rejoins the lead group and sprints past both Pocoloco and Gyro.

Diego and Johnny join the front of the pack and are directly behind Gyro. Pocoloco tries to pass Gyro from the left and the four racers are now immediately lined up behind Sandman. Sandman recalls how he has no homeland to return back to, and vows to win the race for his sister, for the spirits of the Earth, and for the spirits of his father and ancestors. Asking for their strength and courage, Sandman manages to speed up once again. Hey Ya! informs Pocoloco about a dead tree buried in the ground in front of him, which Pocoloco uses as a springboard for his horse by jumping off of it. The announcer and Pocoloco both think that he's in the lead now, but they are surprised by Gyro actually being the one to slip ahead.

Gyro praises Johnny for being able to catch up to him, and says the head wind from Mexico had been helping his horse since the start. Pocoloco, Diego, and Sandman are amazed, while Johnny realizes that Gyro had wrapped the cape on his back with two Steel Balls to mimic the sails of a ship. Gyro successfully reaches the goal and becomes the champion of the first stage of the Steel Ball Run with a 5 length lead and a running time of 18 minutes and 7 seconds.

Author's Note
“
Steel Ball Run is a 31-page serialization. However, I'll be taking a break every ten weeks or so. The race's second stage will resume around June.
”
—Hirohiko Araki
“
は31P連載です。が、10週位ごとに休むことになりますのでよろしく。再開は6月頃。
”
—Hirohiko Araki