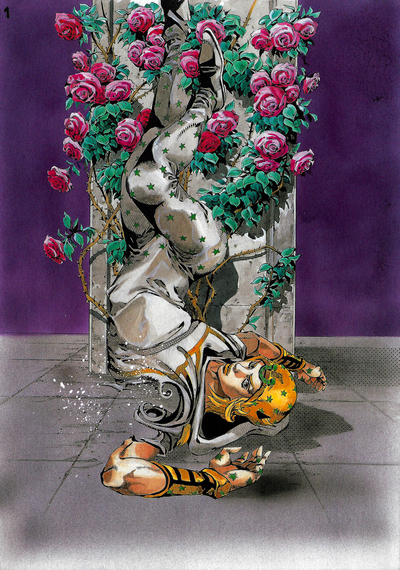 It narrates Johnny's battle at Axl RO's Civil War and his own demons near Gettysburg.

A flashback details the discovery of "Lucy Steel"'s body from the Fox River. A distraught Steven Steel sees her corpse but is convinced that the woman before him isn't Lucy.

At the 12th day of the 7th stage, 145 km West of Philadelphia, Gyro and Johnny spot Hot Pants racing toward a nearby city. Leaving some of their luggage behind, notably Gyro's teddy bear and Johnny's damaged knife, they pursue Hot Pants up to a local garbage dump inside a building. They meet a nun instead, and Gyro checks the next room, Johnny recognizes Hot Pants, who warns him "not to abandon anything".

Gyro and Johnny are attacked simultaneously by various objects they have left behind, notably the teddy bear and knife, who fuse with them and covering them both in a membrane. A flashback exposes Hot Pants' past, in which having secretly let her brother being devoured by a bear deeply traumatized her and made her covet the Corpse to absolve herself of her sin. Hot Pants is then completely covered in the membrane and disappears. Johnny, warned to purify himself with water to dissolve the membrane, manages to escape the first attack. At the same time, accusing apparition of Nicholas Joestar and Danny attack Johnny who wards them off.

Suddenly Jesus warns Johnny "not to shoot if he doubts, then a new path will open to him". A puzzled Johnny realizes that his legs are twitching and goes back to the garbage dump.

Axl RO, a government agent, lured Gyro and Johnny with Hot Pants, from whom he stole every Corpse part and with his Stand: Civil War, materializes the object of their guilt, among others things they've left behind. Johnny realizes he is witnessing an apparition of Jesus Christ, but at the same moment, George Joestar attacks him. Johnny is unwilling to attack him, and on the verge of being overwhelmed, Gyro warns him of Axl RO's location thanks to a Steel Ball, and Johnny manages to fatally shoot Axl RO through the garbage.

Surprisingly, Axl RO is satisfied, the last property of Civil War is transfer someone's sin to their killer, resuscitating them in the process. Axl RO's sin of letting an entire town and garrison perish because he failed in his watch is transferred to Johnny. Dismembered by the apparitions of soldiers, Johnny realizes who he has to shoot and shoots himself, entering the hole created by his nail bullets and awakening Tusk ACT3.[1]

Axl RO takes the last piece of the Corpse's vertebrae from Johnny and prepares to exit the dump. However, Johnny grabs the Corpse through a hole and threatens to tear the Corpse apart, determined not to let anyone else have it. Axl RO stabs Johnny through the hole, killing him. However, Axl RO's own Stand ability revives Johnny and transfers his guilt back to Axl RO. Suddenly, Axl RO is shot in the throat. The shooter is revealed to be Valentine, who seizes all the Corpse Parts and reveals his complete lack of guilt. Johnny is unable to stop Valentine, who deduces that the traitor is still roaming with the Right Eye and leaves.[2]