Across the Arizona Desert (story arc)

Across the Arizona Desert 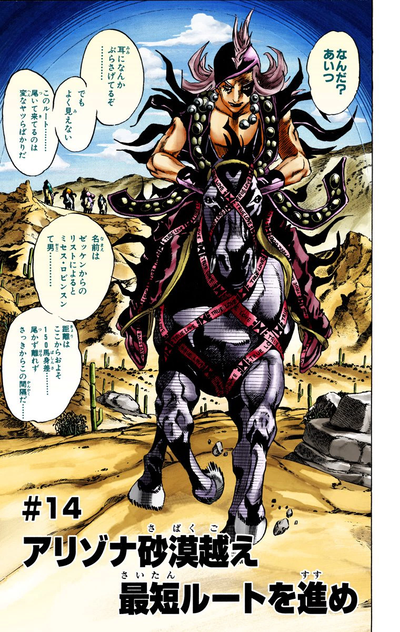 Just as the second stage of the Steel Ball Run begins, Johnny and Gyro are stalked by a murderous competitor.

At 10:00 AM the 26th of September 1890, the 2nd stage begins. Suddenly Gyro veers north-east, and Johnny understands with consternation that Gyro is looking for another short-cut by crossing 150 km of the Arizona Desert without water. Johnny follows Gyro nonetheless, and both are followed by competitor Mrs. Robinson, whose horse happens to have the same dented horseshoe as the murderer.[1]

Some time later, Mountain Tim investigate Mrs. Robinson's horse which is revealed to have a different horseshoe than the murderer, meaning he is still roaming in the Arizona Desert.[2]