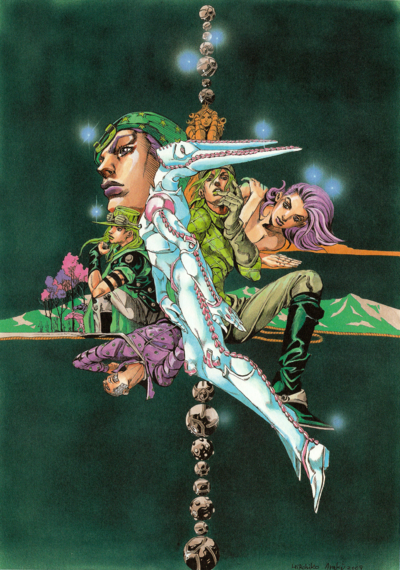 For the Stand with the same name see, D4C.

The story arc is notably separated by the Ticket to Ride story arc, which takes place in between.

Using different layers of air as lens, Gyro manages to evade D-I-S-C-O's attack and quickly disposes of him. Having no idea of what happened, Gyro interrogates some witnesses in the park nearby, but they disagree on the shooter's identity, alternately pointing Diego, Wekapipo or Funny Valentine as the culprit. Meanwhile, Diego approaches Wekapipo.

A flashback details the life of Jesus Christ after his Crucifixion, resurrected under the care of Joseph of Arimathea, Jesus drew a map of America with the general location of his future Corpse's parts on the ground then traveled west, until he sailed to the American Continent and died here, his cadaver washed away in a flood and his relics scattered across the continent by animals until the Heart was found by Valentine.

At 4:09 PM, Wekapipo follows Diego to the same park near the Independence Hall, he loses him in an alley, and find a revolver laying on the ground. Wekapipo is attacked by a man whose face is hidden in a flag, but manages to shoot him with the revolver. Surprisingly, the aggressor is Johnny Joestar, who escapes in he sewers. Then Diego approaches Wekapipo.

At 4:05 PM, near the Independence Hall, Diego infiltrates the Independence Hall, seeing a heavily pregnant Lucy Steel being transported, and Valentine quietly getting out without any escort. Diego opts to follow him, and uses Wekapipo, who he knew followed him, as a bait to draw Valentine's power in the open. Diego loses Wekapipo in an alley by jumping to the roofs, and observes Wekapipo pick up a revolver. However Wekapipo shoots Diego. Surprised Diego jumps on Wekapipo to fight him, and manages to shoot him with the revolver. Diego realizes Wekapipo is standing around a corner of the building and that he shot Johnny Joestar instead, who escapes in the sewers. Diego begins to suspect Valentine's true power, and approaches Wekapipo.

Diego then asks if he saw him shoot Johnny Joestar, and proposes to ally with him, certain that if Valentine used his power, it was to take down everyone in one move. As Diego senses the dinosaurs he sent being slaughtered, a puzzled Wekapipo admits he was the one who shot Johnny Joestar.

Valentine attacks Diego from above, only to receive Wekapipo's Wrecking Ball in the head, but the ball digs into his head instead of hurting him. Valentine reveals his Stand Dirty Deeds Done Dirt Cheap or D4C who has the power to transport objects through alternate universe by putting them between two surface and allow different universes to coexist without being in contact. Diego slams Valentine on a wall, only for him to disappear and return out of Diego's body. Valentine is however incapacitated by the Wrecking Ball's left side ataxia and Diego attacks him. Valentine grabs the flag and covers himself in it, disappearing once again. Valentine then drags Diego through the flag, and Diego sees another Diego, Wekapipo and Valentine battling in the same street. Unable to move because his legs are still on the other side, Valentine steals the Left Eye and both Diego's body begin to disintegrate in Menger sponges.

At 4:08 PM, Valentine lured Diego and Wekapipo near the park, disappearing and reappearing through objects and using alternate selves as decoys, he shot Johnny Joestar, and reenacted Johnny's shooting in other two different versions with Wekapipo and Diego as shooters in three coexisting parallel universes. These three events are separately witnessed by the bystanders in the park, leading to the later confusion.

In the parallel universe, Valentine quietly goes away but is shot by Johnny Joestar who was guided by Diego's dinosaurs in the sewers. Gravely hurt, he seemingly dies, but Diego knows the original got away with the Left Eye when he closed a door on him. Before disintegrating himself, Diego lures both Wekapipo near the flag who still functions as a portal between universe, when drags one in the other's universe. As both disintegrate into Menger sponges, Diego gets away in the universe hosting the Holy corpse where "everything is based". Diego theorizes that his universe is the only one hosting the Holy Corpse otherwise Valentine would have looked for it in other universes and confidently pursues Valentine.[1]

Then the Ticket to Ride story arc happens.

Lucy Steel has no other choice but to embark the U.S.S Blue Hawaii with her husband, with Valentine's promise that he won't kill Steven Steel, despite noticing Lucy's attempt at leaving a clue of their location. They are to go to the East Coast, at the last "X" mark on Joseph of Arimathea's map.

Diego Brando followed Valentine's scent up to the Delaware but has now lost its trace. He is ambushed by Hot Pants but soon both agree to cooperate to get the Holy Corpse, Diego being coerced into cooperation by Hot Pants' promise of Diego's biological father's whereabouts. Now following Lucy Steel's scent, they spot Lucy's message. Both are followed from afar by Johnny and Gyro. Diego and Hot Pants arrive to a trainyard in which a departing train shelters Lucy, Steven and Valentine.

Diego and Hot Pants give chase but Valentine slows them down by dragging alternate versions of both from a parallel universe and throwing both at his pursuers. Diego nonetheless uses D4C's power to his advantage and slams both between a door and a wall, sending them back. A vicious fight ensues as Diego and Hot Pants try multiple times to kill Valentine before he can travel to an alternate universe and switch himself, culminating in both being thrown out of the train a Valentine narrowly surviving while Diego is cut in half by the train's wheels.

Meanwhile Gyro and Johnny notice that strange space distortions keep happening around them, Gyro gets a small cut in finger and notices that the wound is moving. In the train Hot Pants contemplates a metamorphosing Lucy Steel, who is becoming the Corpse. The same space distortions cause Hot Pants to fuse with miscellaneous object converging toward her heart and killing her. Valentine concludes that everything is drawn toward Lucy and then declares the Corpse as his ally, which is manifesting a new ability.[2]