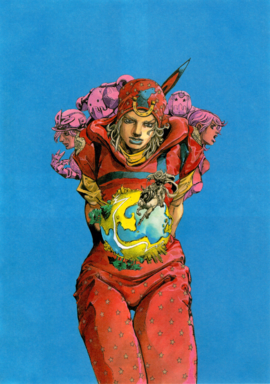 The World of Stars and Stripes (星条旗の世界, Seijōki no Sekai) is the twenty-second and final story arc in Steel Ball Run.

After a brief narration of the after effects of the race, Johnny embarks on a boat to give Gyro's corpse back to his family, in which he meets his future wife Rina Higashikata. We last see Johnny give a last prayer, and smile as he goes to Europe to bury his friend.