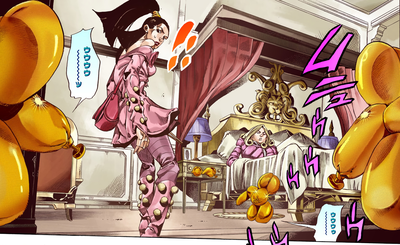 It narrates Lucy's infiltration of Valentine's residence in Chicago and the battle between Hot Pants and Mike O..

Near the Michigan Lake, Diego meets with a mysterious man from the Government, asking him the traitor's description. Diego reveals that the traitor is a woman weighting 51 kg, At the governmental residence in Chicago, the man, Mike O., head of Valentine's security staff, reveals everything to Valentine, who authorizes the questioning of every woman associated with the government and the Steel Ball Run race.

Lucy sees that the search is closing in on her, and takes the initiative by approaching the First Lady Scarlet Valentine. With soporifics given by Hot Pants, Lucy manages to approach Valentine while he's asleep, but Mike O.'s Tubular Bells, automatic scent tracking balloon animals made from nails, intercept her. A furious Scarlet tries to kill Lucy too, but Lucy manages to use Scarlet as a decoy, making the balloons kill her instead.

As Hot Pants come to the rescue, Lucy is discovered by Mike O. and a fight ensues between the two Stand users, in which Mike explodes his throat trying to blow up more balloons while infected with Cream Starter. Hot Pants cannot make Lucy escape and Lucy is forced to disguise as Scarlet and Hot Pants departs with the Ears and Heart, leaving the Right Arm which was too big for her escape.[1]