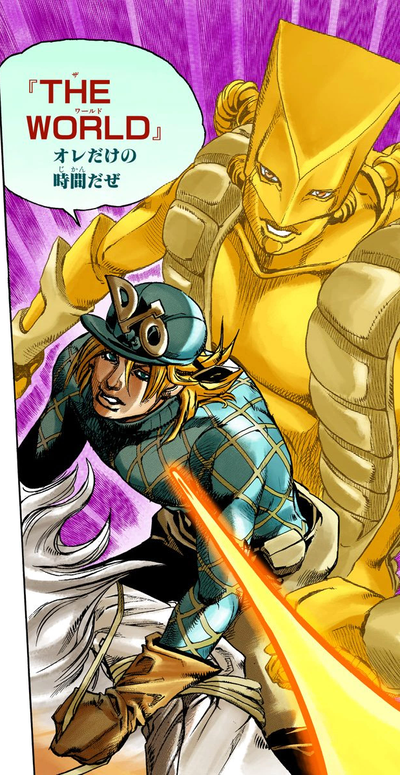 It narrates the surprise attack and following tense race with Johnny and a parallel world Diego Brando, who wields the time-stopping Stand THE WORLD.

After healing Steven, Lucy, and himself, Johnny contemplates the end of his search for Saint's Corpse. Observing the last horse riders still in the race passing by, Johnny realizes that the Corpse has been stolen by a last unknown enemy. It went totally unnoticed and Johnny spots familiar horseshoe prints, leading to him identifying the culprit as at least a Steel Ball Run contestant. Being informed by Steven that the Corpse is probably headed to the final stage of the race in Manhattan Island and determined to retrieve it, Johnny continues the race and pursues whoever stole the Corpse. The final stage: the Manhattan Rhapsody, a 15 km dash through New York's streets.

Before the 9th stage, the racers still have to reach Union Beach. On the way, Johnny catches up to the mysterious culprit, but as Johnny shoots him, the rider and his horse disappears and reappears behind him. Johnny turns back to find a Parallel World Diego Brando, wielding the time-stopping Stand THE WORLD, who attacks him.

A flashback reveals that Valentine continuously searched for a Stand user he could entrust the Corpse to, and who could beat the Golden Spin, when he met Dio. Convincing Dio to follow him to the base world, he hid Dio underground in case his initial plan wouldn't work. Johnny is unsaddled and shoots several nail bullets at Dio. Both realizes what the other is capable of, and aim to devise a plan which will counter the other's power.

Johnny Joestar finishes the 8th stage in 5th place. The announcer declares that even in the last stage, anyone among Johnny, Dio, Pocoloco, and Norisuke Higashikata can seize victory. In the ferry used as a transitional rest between the 8th and 9th stage, Johnny analyzes Dio's timestop and concludes that Dio mustn't see the attack coming. Disembarking, Johnny meets with his father George Joestar, and they silently reconcile. George publicly apologizes to his son, who rode through America. With a renewed will, Johnny pursues Dio.

Another shot of the Golden Spin nails throws Dio off, who sees that the timestop doesn't completely affect Tusk. Using gas and matches, Dio tries to light Johnny and his horse up from afar, but Johnny opens the ground with Tusk ACT4, disappearing in the sewers. Dio is now in a weak position, unable to see the next attack. He then lets his fangirls hug him, who are killed in Dio's stead by the rotation. Johnny joins the rest of the racers on the Brooklyn Bridge, for one final attack. Johnny shoots his Golden Spin nail as Dio stops time.[1]