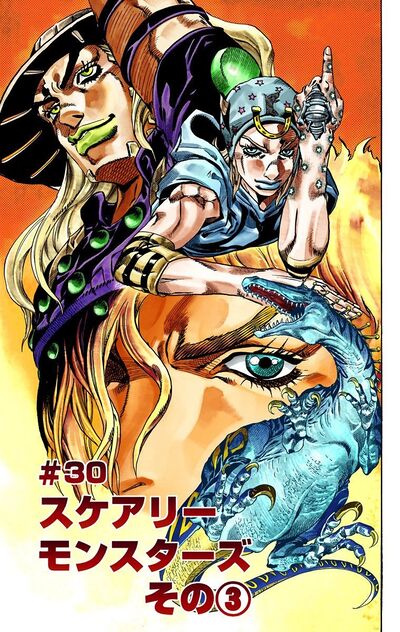 It narrates Johnny and Gyro's battle against a swarm of dinosaurs, one of whom is Diego Brando.

As the final dash of the second stage between the top racers begins, Johnny witnesses the photograph of a mountain bearing the same form as the letters engraved on his arm, he distracts Gyro with it, leading to Diego taking the first place, Johnny the second place, Sandman the third place, and Gyro the fourth. Gyro's angry, but he cannot do anything about it as the race immediately moves on to the third stage: 517 km through the Rocky Mountains.

Valentine examines a tissue Pork Pie Hat Kid rolled the left arm within, deduces which limb it was and that Johnny was in fact sheltering it the whole time. Valentine reveals the Corpse's heart within him, which is seen by Lucy Steel. Valentine however doesn't know he's been watched.

Gyro and Johnny see Diego who's fallen off his horse and is visibly hurt. They are however violently rebuked. Later Diego joins them, surprisingly jovial toward them, an exhibiting surprising abilities such as an inhuman sense of hearing. As night falls the three of them take shelter in a village. Gyro wanders off from the group looking for food. Diego shows more and more strange symptoms, such as eating rocks or having his vision altered. Gyro alerts Johnny of a bear corpse just under their home's window, and they realize that Diego transformed into a dinosaur.

The raptor's kinetic vision gives him an edge against Gyro and Johnny's projectile based attacks, and they can only flee from the transformed Diego. However the whole village has transformed into various dinosaurs. A tyrannosaurus attacks Johnny but Gyro managed to hide him in a sewer by flattening his body with the Spin. They both realize that the next corpse part is hidden in the next mountain and resolve to go look for it.

Diego's backstory is revealed: at first buried alive as a baby then washed down into a river by a flood, his mother saw him and changed her mind, deciding to raise him as she runs to the river to pick him up. Swept away by the flooded river's flow, both were left to die by Diego's father, but survived. Then Diego passed his youth working at a farm, the bad treatment he and his mother received, notably his mother dying from an infection, left Diego resenting humanity as a whole and becoming ambitious to one day rule over those he hated. That ambition led him to search for glory in the Steel Ball Run.

In the sewer, Johnny and Gyro are marked by small dinosaurs, setting the whole village on their trail. As they exit the sewer on the side of a cliff, they see the whole village climbing or descending the cliff toward them. They realize that Gyro is slowly transforming into a dinosaur, and only the next corpse part's energy can counter the effect of that transformation. Johnny and Gyro jump over the ravine to the other side, discovering a Stand holding the Corpse's eyes but Diego catches up to them and seizes the eyes before them.

Diego having both Corpse eyes, Gyro now working with him as a semi-transformed dinosaur, Johnny is left alone. The Stand also informs Diego's of the next Corpse part's location. Dr. Ferdinand makes his appearance and reveal that his Stand Scary Monsters was controlling every dinosaur so far. Dr. Ferdinand hints at the Corpse's true identity, which is whose of someone even the Pope would have to defer to. Johnny abandons his left arm temporarily, and before he's controlled by Dr. Ferdinand, manages to toss one of the eyes to Gyro. Gyro is then cured, and acquires the new ability Scan. Both manage to incapacitate Dr. Ferdinand, who's eaten by cougars he transformed into raptors. However Diego escapes with one of the eyes, and retains his dinosaur abilities.[1]

Later Gyro and Johnny join the top racers in yet another final rush to finish the third stage. While the rest of the racers go around the lake, Gyro, Johnny, and Diego choose to ride directly through the lake. At the last moment, Johnny passes both of them, reaching the end of the stage with Diego and Gyro behind him. However, it is revealed that the true winner of the stage, Hot Pants, had already passed the finish line an hour ago. Gyro acknowledges his defeat and resolves to obtain the strength of will necessary to win.[2]