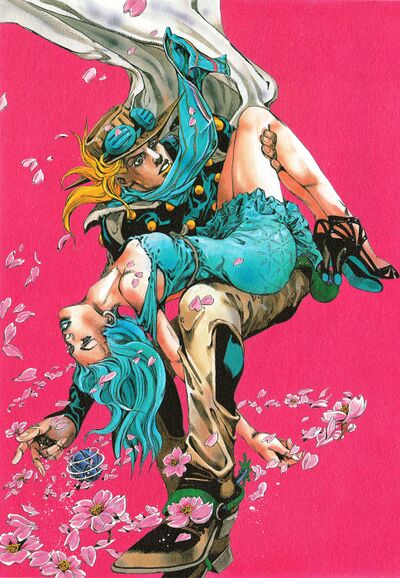 It narrates Lucy's attempt to escape the Independence Hall. It takes place in the middle of the twentieth story arc, D4C.

In the Independence Hall, a heavily pregnant Lucy is contacted by a mysterious voice compelling her to get away. Witnessing a wounded Steven in the next room, she begs her guards to heal him, only for them to try to sedate her. Due to a series of coincidence, the guards are all incapacitated or killed, allowing Lucy to act.

Meanwhile Gyro meets a wounded Johnny. Johnny explains Valentine's power to Gyro, who asks him to abandon the chase for the Corpse Parts, considering that they've lost. However Johnny stands up briefly, showing the evolution of his legs, and reaffirms his will to get hold of the Corpse. Gyro accepts to help him and reveals a last level of the Spin, which can be used only by the most skilled horse riders, harnessing a power which can beat Valentine. Unable to locate the Corpse Parts, they resolve to chase Lucy's trail instead.

In the Independence Hall, Lucy manages to force a coach driver to drive her and Steven up to the Delaware in which a boat awaits them. To Lucy's horror, she realizes the voice was Valentine's and that he lured them in the U.S.S. Blue Hawaii.[1]