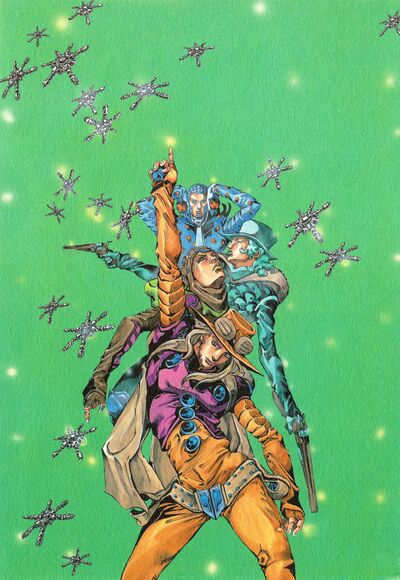 It narrates Johnny and Gyro's battle against the duo of Wekapipo and Magent Magent in a frozen straits where they cannot use the Golden Rectangle.

Two agents of the US Government are introduced watching over the frozen straits which separate the two sides of the Michigan Lake.

Wekapipo's past is explored: once a member of the royal guard of the Kingdom of Naples, Wekapipo broke his sister's marriage on the premise that she was beaten blind. Furious, her husband challenges Wekapipo and is subsequently killed in their duel. However, Wekapipo is forced into exile by Gregorio Zeppeli and enters Valentine's service a broken man, having heard of his sister's death.

Johnny and Gyro are looking over the frozen strait, searching for the Indian's path, a path made by the locals consisting a reinforced ice and wood. Unable to find it, they nonetheless cross the strait over a dangerously thin ice, a wolf following them for seemingly no reason. In the middle of the strait, they are attacked by Wekapipo with a Steel Ball in which several other smaller spherical satellites are encased named Wrecking Ball: its effect is to make everything's left side disappear.

The next part of the fight consists of Gyro and Johnny defending themselves from both Wekapipo and Magent Magent sneaking in their dead angle. Their ordeal is complicated by Magent's invulnerability power 20th Century Boy. While Wekapipo suspects that the wolf is hosting the Legs, Johnny and Gyro realize that in the frozen environment, they cannot see the Golden Rectangle. Moreover, Gyro's hands which are able to reproduce it are targeted by Wekapipo. When Magent kills the wolf, they realizes that the Legs are nearby.

Using one of Magent's pistol bullets, Gyro is able to critically injure Magent Magent and take him out of the fight, however Gyro and Johnny's Spins are inferior to Wekapipo's giving him the edge in the battle. Gyro closes in on the wolf's corpse to use it or the Legs as models for the Golden Spin, but Wekapipo sinks the body into the lake. Johnny is unable to shoot all of the satellites, and Gyro must face Wekapipo with effectively one Steel Ball and no Golden Rectangle. At the last moment, snowflakes appear before Gyro and he is able to use them to reproduce the Golden Spin, winning the duel.

Several flashbacks have been reminding Gyro of the uncertainty of life, notably the possibility of both failing and succeeding, as well as of miracles happening. Gyro was a doctor for Wekapipo's sister, and saved her life. She was left alone by the husband's family who thought she was dead. The revelation that his sister lives prompts Wekapipo to help them find Lucy. Moreover, Johnny finds the Indian's path which will facilitate their crossing, and they obtain the legs.[1]

At the end of the sixth stage, the major racers are again assembled for one final dash. Gyro and Johnny, currently ahead, are challenged by Pocoloco, who deviates right by Hey Ya!'s counsel. Johnny and Gyro suddenly see a ravine hidden in the snow, inspiring them to use a Steel Ball and Tusk ACT2 to cross the ravine using a metal rope. Gyro takes first place in the sixth stage, with Johnny taking second place. Meanwhile, Magent Magent crawls back to civilization, having overheard that the traitor is Lucy Steel.[2]