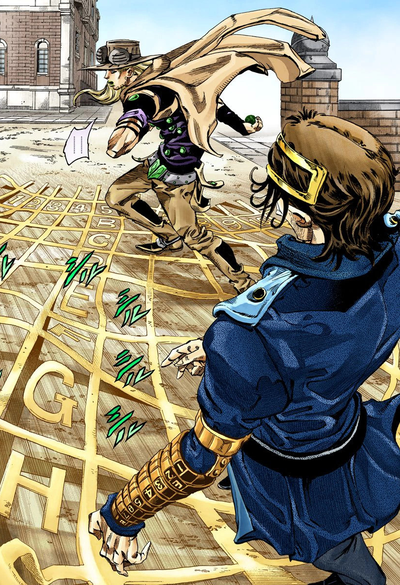 It narrates Gyro's short battle against D-I-S-C-O and his Stand, Chocolate Disco.

While the two are strolling down a road astride their horses, Gyro comes up with a "gag" that he presents to Johnny. He says the days of the week from Monday to Sunday in Italian. However, by Wednesday he would turn stupid, by Thursday he would make espresso (demonstrating with his hair), by Friday he would mix in the sugar, by Saturday he would drink, then on Sunday, it being a day of rest, sleep. Johnny writes down and compliments Gyro on the gag, and the two go on their way.[1]

At 3:59 PM near a park south of the Independence Hall, Johnny and Gyro spot Diego and Wekapipo following him. Johnny notices an unidentified horseshoe trail but doesn't suspect anything. While Gyro tries to approach Diego's position and Johnny watches from afar, Johnny sees that Gyro, at the corner of a building, is being surrounded by both President Funny Valentine and his henchman D-I-S-C-O. Johnny tries to warn Gyro but mysteriously, Gyro doesn't hear him. Suddenly Johnny is shot by an unknown party, and barely escapes in the sewers with Tusk ACT3.

Gyro notices Johnny's absence, and sees that one enemy has retreated. Warning D-I-S-C-O not to do anything, Gyro rushes toward his horse and Johnny. A grid appears on the ground and a startled Gyro throws a Steel Ball toward D-I-S-C-O, which mysteriously teleports above Gyro and hits him instead. Disco then opens a bottle of acid and pours it on the ground.[2]