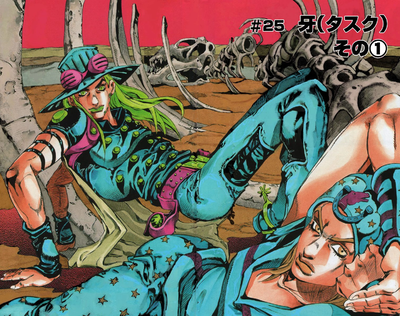 It narrates Johnny's battle in the open against the Pork Pie Hat Kid.

A flashback presents Joseph of Arimathea, a man who descended Jesus Christ from the Cross. Joseph of Arimathea drew a map depicting an unknown land and several points of interest, said map remained hidden in an abbey until it was stolen during the 16th century an its whereabouts became unknown.

Johnny and Gyro are attacked by Fritz von Stroheim, who is quickly disposed of. Johnny is appalled at the frequency and violence of the attacks against them, saying that the money prize alone cannot justify these. Johnny suddenly realizes that his left arm contains a mummified arm.

Meanwhile Steven Steel enquires about Johnny and Gyro's whereabouts, especially if they have found a mummified corpse. Funny Valentine, President of the United States, assures that Gyro Zeppeli must have found it, even unknowingly, declaring that the Corpse is a treasure worth any riches in the world. Valentine also shows that Joseph of Arimathea's Map is in his possession. Lucy Steel barges in, inadvertently spilling coffee on Valentine. However, coffee and coffeepot briefly disappear before an empty coffeepot falls from the roof, revealing that one of Valentine's henchman was sitting above the train.

As they are about to reach Monument Valley, Gyro, then his horse and his bags suddenly disappear, leaving Johnny alone and attacked by an unknown ability. Johnny realizes that two hooks are appearing from feathers falling off and seek to hook him up. The hooks only manage to take his bags as Johnny takes shelter under a rock. Johnny realizes that this aggressor, as well as every other terrorist attacking him and Gyro were after the arm he had with him.

Pork Pie Hat Kid, one of Valentine's henchmen, is revealed. He searches Johnny's bags and concludes that the left arm is with Johnny. Pork Pie Hat uses beetles to hook Johnny up but before he can do anything, a Stand, Tusk appears before Johnny and repels the attack with Johnny's spinning toenails, to his amazement. Tusk also tells Johnny the enigmatic phrase: "Movere Crus", before disappearing. Johnny concludes that the left arm was acting on its own, uncovers the Steel Ball Run's true purpose: retrieving the parts of someone's corpse. A small ditch thrown by Gyro thought the feathers indicates to Johnny his enemy's position.

Johnny slowly crawls to Pork Pie Hat's camp, hidden by dirt. Pork Pie Hat tries to make Johnny reveal himself, by hurling rocks at his general location, but finally uses his horse Slow Dancer so that it can smell Johnny. Localizing him, Pork Pie Hat set the zone on fire, an attacks a bait set up by Johnny. He sends his spinning nails through the feathers, beating Pork Pie Hat.

When Johnny reaches Gyro, Pork Pie Hat hooks Johnny through Gyro, incapacitating both. Johnny is forced to give Pork Pie Hat the left arm, but the latter realizes too late that Gyro made the arm's nails spin too, killing him for good.

Johnny asks if Gyro is interested in the Corpse too, but Gyro denies it. Asked about what the corpse is, Gyro theorizes that it must belong to a Saint, as their relics have often been sought after, blessing their proprietors and the nations which owned them. As they seal their partnership, the duo see Diego and Sandman racing toward Monument Valley too.[1]