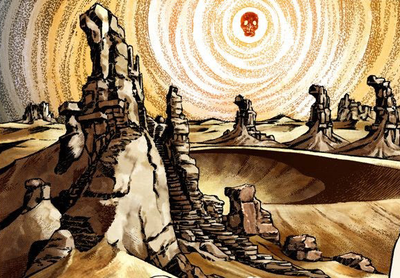 For the location with the same name see, Devil's Palm.

The Devil's Palm (悪魔の手のひら, Akuma no Tenohira) is the fifth story arc in Steel Ball Run.

It continues Johnny and Gyro's confrontation against the Boomboom Family and the awakening of Johnny's Tusk.

Johnny and Gyro continue to be chased by the Boomboom Family members. They later realize that it is competitor Mountain Tim who is catching up to them. Mountain Tim, affected by Tomb of the Boom's magnetism, is pulled towards the two as the Boomboom family watches from afar. Gyro uses his Steel Ball to hit the top of a rock which causes the iron in the debris to magnetize towards Mountain Tim. The impact causes Tim to fly in the air before he unravels himself into a rope using his Stand, Oh! Lonesome Me.

Mountain Tim realizes the situation and presents his power that he calls a Stand. He explains that he had acquired it by stepping into a Devil's Palm, a moving phenomenon granting people Stands. Benjamin Boomboom and L.A. Boomboom ambush them and use their Stand in an attempt to immobilize and kill the three. As Gyro teaches the third lesson of the Spin, Johnny's nails begin spinning as he awakens his own Stand Tusk. The nails fly toward Benjamin which kills him instantly. Unbeknownst to them, they are in the Devil's Palm without realizing it.[1]