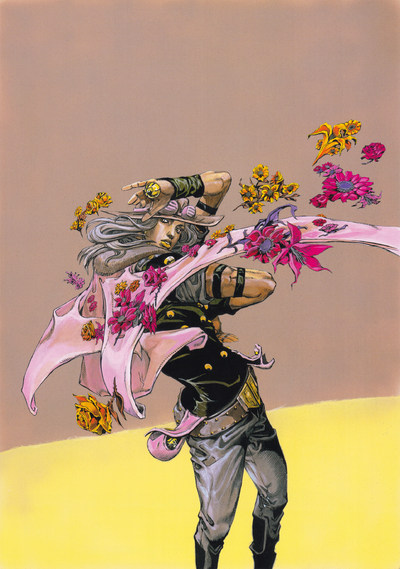 It narrates Gyro's duel against Funny Valentine and Johnny's awakening of Tusk ACT4.

Valentine disappears on the ocean floor, while Gyro harness the Golden Spin with Valkyrie. Valentine tries to use his alternate selves as decoys to waste Gyro's final shot, but Gyro correctly deduces Valentine's next move, as Valentine attacked from the opposite side the decoys appeared. D4C is hit by the Steel Ball imbued with the Golden Spin.

The Ball hits the dimensional wall, and Gyro's new Stand Ball Breaker passes through the wall with the Spin energy. Ball Breaker induces senescence in Valentine's cells, greatly aging him. Valentine falls to the ground, as his decoys are killed in another steel ball throw. Gyro receives a bullet wound in the process but lives. However, Valentine reveals himself to be still alive, and Gyro's wound begins to travel toward his heart.

As Valentine begins to move, Gyro passes on to Johnny a mysterious speech, lesson n°5:

Gyro throws his Golden Spin imbued Steel Ball at Valentine, but Ball Breaker cannot reach Valentine anymore. D4C cuts through Gyro's chest. Valentine explains that his victory was a stroke of luck: when Gyro threw the ball the first time, it passed through the dimensional gap between Lucy and Valentine. An infinitesimal part of it was scraped of, and the sphere became imperfect. Thus despite the Golden Spin, it couldn't hit the wall at full power and Valentine survived. As Valentine finishes his explanation, Gyro expires and fall off his horse. Johnny is petrified, unable to cope with Gyro's death as Valentine draws close to him.

Valentine empties his revolver on Gyro's corpse to confirm his death, and attacks Johnny. Johnny is still shocked and nearly wastes all of his nail bullets. Valentine disappears into another world, and using a blind spot, cuts Slow Dancer's throat, causing it and its rider to fall on the ground. As Valentine closes in on Johnny, the ex-horseriding champion ponders on Gyro's last words and finally understands. Using Gyro's steel ball on Slow Dancer's leg, Johnny reproduces the very first effect of the Spin Johnny witnesses- leg reflexes. Slow Dancer kicks Johnny high into the air with a Golden scale leg movement, and Johnny is imbued with the Golden Spin. In midair, Tusk ACT4 appears over Johnny.

As Johnny's last fingernail hits the dimensional wall of the gap between space, Tusk ACT4 forces the wall open and goes into the dimensional gap. Tusk then pummels D4C with the signature Stand rush "ORAORAORA", with enough force to form a crater on the ground. At the bottom of the hole Valentine nonetheless escapes by putting himself between the ground and his coat. In another dimension, Valentine finds himself underground but manages to send his Stand to this universe's Valentine. A confident Valentine prepares to confront the original Johnny again. Suddenly his left leg begins to rotate, and soon his whole body and even D4C begin to spin while being drawn toward the same underground spot. Imbued with the Golden Spin down to his individual cells, Valentine is forced to remain at the spot in which he was hit with it, which happens to be underground. To his horror, even his alternate selves aren't immune as Tusk hit D4C, the Stand, meaning the damage will be forever transferred to the user. Despite his efforts, the Golden Spin truly represents an infinite energy as Valentine is facing the fate of suffocating in the ditch over and over again.

A flashback details a young Funny's meeting with his future father-in-law Captain Valentine. The soldier narrates the story of Funny's father, who resisted a year of torture thanks to a handkerchief he managed to hide in his eye socket. That handkerchief was embroidered with Funny's birth date. The soldier praised the father's patriotism, a lesson which deeply engraved itself into Funny. Holding that same handkerchief, Valentine doesn't despair and covets a plan to kill Johnny Joestar.

In the base world, Johnny regrows five nails, and warns a recovering Lucy that the fight is not over. Valentine reappears but admits his loss, and he presents a proposal for Johnny to bring back Gyro.[1]