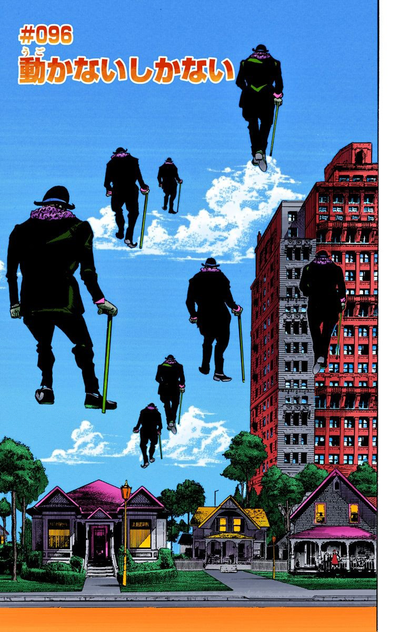 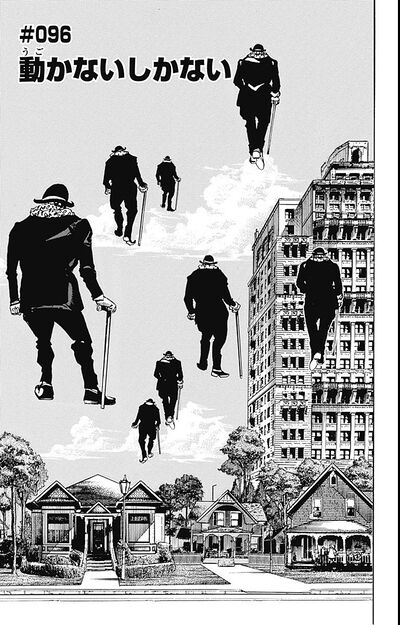 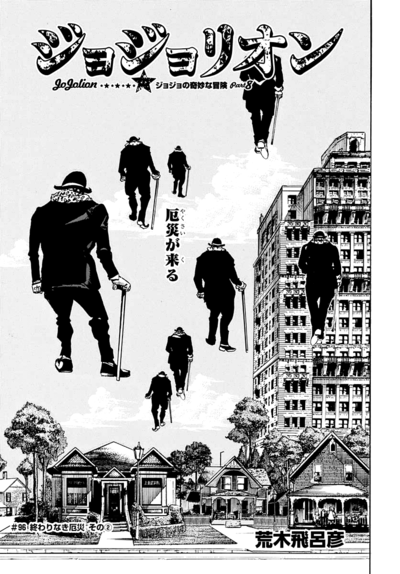 Rai Mamezuku is sitting in jail with another prisoner, who complains about his constant mumbling. Unfazed, Mamezuku mentions that he's innocent and was only sheltering his equally innocent friend Josuke Higashikata and then inquires about his cellmate's health. This enrages the man who only wants to be left in peace but then Mamezuku mentions the power of the hospital director Satoru Akefu. Mamezuku shows a mobile phone and a kitchen knife he's stolen from the evidence locker and states that he's free to go outside but must stay in the cell. Filming the exterior with the phone, Mamezuku shows the screen to the cellmate and mentions the elderly man in a black suit standing near the window but with his back facing them. The cellmate shouts that there isn't anybody but Mamezuku insists, theorizing the figure to be a materialization of "calamity energy". To prove his point, Mamezuku stands up to get a good look at the man but a cup of water suddenly spills on the floor and the light breaks, sending shards flying at them. He also tries to call Josuke to inform him about the enemy, but a food tray nearby bursts, revealing a swarm of maggots.

Mamezuku theorizes that the form of the hospital director they were seeing is a form of karmic retribution whose energy is probably related to the deeds of the individual who sees him. Mamezuku finally manages to make his cellmate see the doctor and mentions that he's found photos of a knife attack in the phone incriminating the cellmate. The man was a murderer who had stabbed elementary school kids to death with a kitchen knife while they were waiting at a bus stop. The man angrily yells at Mamezuku to shut up and prepares to attack him with his knife. Instead, the man's karmic deeds leads to him striking his own neck with his knife, which Mamezuku had been waiting for. The police rushes the injured criminal to the hospital. When the ambulance reaches the TG University Hospital grounds, Mamezuku gets out of his hiding spot, as he had unraveled himself to hide under the cellmate's clothes. He still sees the figure of the hospital director in the parking lot. Mamezuku expresses his final theory that the figure he's seeing is actually the Stand and that the real user is hiding somewhere.

Meanwhile, Yasuho is still lying near the Higashikata House, heavily injured. She also sees the hospital director, standing in the garage. She has been unable to contact Josuke and Mamezuku even with Paisley Park, but finally reaches Toru. She cries for help to Toru, who is calmly having lunch. Since Yasuho is injured, Toru says he ought to call an ambulance but Yasuho refuses, instead mentioning that there is a way for her to be healed. Interested, Toru drives to the Higashikata estate, telling Yasuho that he's on his way.

In the house, Jobin crushes the cellphone where Paisley Park previously was and looks at his siblings. He reveals to them the nature of the Locacaca and its importance. He adds that they will protect the fruit from all enemies, including Josuke and Yasuho. Jobin then reassures them that although Norisuke is knocked out, he is not going to kill his father. Jobin tells them to help him bring Norisuke to the second floor and the fruit in another hiding spot. Tsurugi's condition continues to worsen and he begins to bleed while Mitsuba can only hold her son in her arms.

Suddenly, Mitsuba sees the hospital director passing by the corridor to the left. Something invisible has entered the room, and Mitsuba also sees the doctor in a computer screen and his reflection on the panels of the bookcase, going to the left, then him passing through the bathroom. Mitsuba understands the nature of the attack, which is a continuous assault that has been happening since she left the hospital and that is meant to bring out the Locacaca through calamities, then make everyone affected destroy themselves. And now, the hospital director is inside of the house. Jobin, who has been until this point unaware about the hospital director's proximity, finally catches glimpses of him passing by the window then slipping from a photo's frame to under the bedsheets, where they can see his form approaching. Despite Mitsuba warning Jobin not to pursue him, Jobin still summons Speed King and attacks.