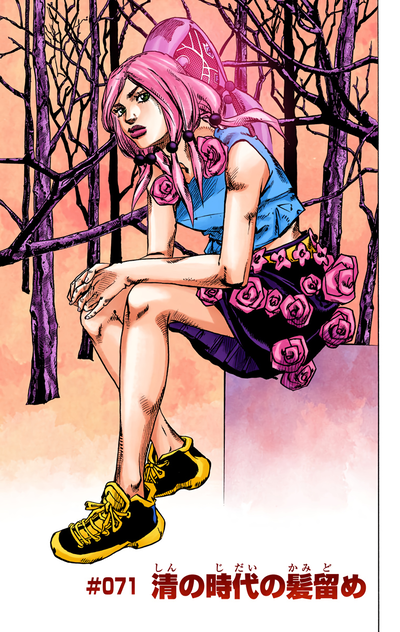 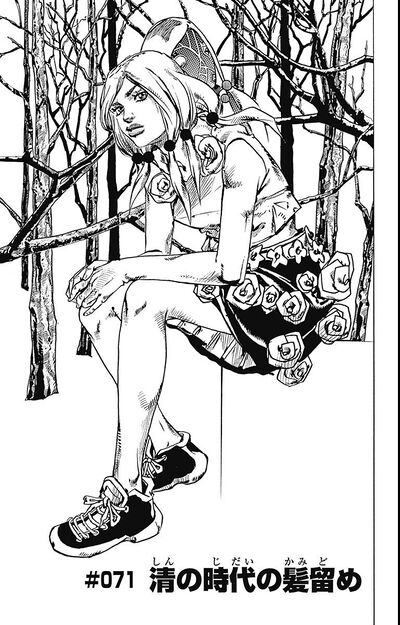 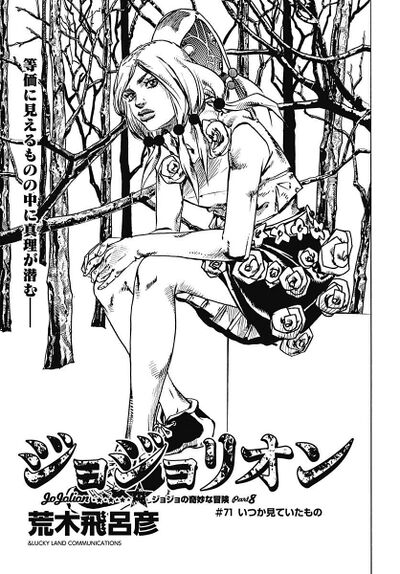 Shin no Jidai no Kamidome

The Qing Dynasty Hair Clip (清の時代の髪留め, Shin no Jidai no Kamidome), originally titled Something She Once Saw (いつか見ていたもの, Itsuka Miteita Mono) in the UJ release, is the seventy-first chapter of JoJolion and the nine hundred eighteenth chapter of the JoJo's Bizarre Adventure manga.

Following Urban Guerrilla and Doremifasolati Do's death, Josuke, Rai Mamezuku and Yasuho go down the mountain slope back to the parking lot. As Josuke wanders ahead, Mamezuku privately praises Yasuho but tells her to go back home as he deems that Josuke's emotional bond with her will become a liability in the following encounters with the enemy. It prompts the young woman to recall an incident from her past.

Back in 2005, when Yasuho was thirteen years old, she spotted a hair clip she liked a lot in a flea market and bought it on impulse. Showing off the hair clip to her mother Suzuyo, Yasuho enthusiastically described it despite the latter's indifference. In fact, the young girl wanted to be pretty for when she'd see her father who divorced and lived elsewhere. The next day, Yasuho was reminded of a classmate's birthday; because she was fascinated with the hair clip, Yasuho forgot to buy a gift and wish her a happy birthday. The oversights made her unpopular and the distress apparently caused a dramatic dandruff and flaking skin problem.

Wishing to look perfect when she'd see her father, Yasuho used a strong skin medicine to seemingly great effect. However, on the day of her meeting, Yasuho lost the hair clip. Frantically searching for it, Yasuho soon got mad and accused Suzuyo of having thrown the clip away out of spite. Yasuho tried to run away from her mother, and when Suzuyo tried to grab her wrist, the hand slipped because of the skin flaking again. Suzuyo, seeing Yasuho unconscious and bleeding, panicked and got out to call for a doctor. Meanwhile, a bipedal creature revealed to be the hair clip's true form crawled out of its hiding spot within Yasuho's hair and stung her head, dramatically increasing the flaking.

When Yasuho woke up, she saw her father standing by her side. She was overjoyed to see her father with her and complimenting her hairclip, but then he changed subject. Yasuho's father revealed that he wouldn't spend his Sundays with her anymore. He explained that he's found a new lover with whom he wanted to found a new family and thus fully dedicate his time to this new lover. Heartbroken, Yasuho pretended to not feel well to go to the bathroom, just in time for her father to crumble into skin flakes. In reality, the creature made a fake to torment Yasuho and cackled at the accomplishment of its misdeed. When Suzuyo came back, she found Yasuho in the bathtub, her wrists slit.

In the present day, Yasuho narrates her meeting with Josuke. Pondering on her otherwise unexplainable impulse to save a naked stranger, Yasuho recalls the phrase "There isn't a single thing that is good to overlook". It is revealed that after her suicide attempt, Yasuho was brought to a hospital and bandaged. As she was recovering on her bed, doctor Holy Joestar-Kira read her diagnostics, then approached her from behind, told her the aforementioned sentence and hoped that "what was important to her would come into view", and finally left. Soon, Yoshikage Kira entered Yasuho's room, apologizing for his mother's eccentricity. He then showed the broken hair clip to Yasuho, explaining that he'd stepped on it accidentally, and killing the creature at the same time, and apologized again before leaving Yasuho with the hair clip. As she was lying on her side, she didn't get a good look of either of the Kira.

In the present day again, Yasuho now guesses that she'd met Holy and Yoshikage. Ever since that day, Yasuho had been searching for this important something. In the young woman's mind, her meeting with Josuke was more than saving his life, it also gave her purpose. Yasuho dramatically exclaim that her goals are the same as Josuke's and makes it clear that she'll come along anyway.

Bored, Mamezuku stops listening to Yasuho's rant and joins Josuke. He does note that the hair clip, which he guesses was a rock animal and "stole" something from Yasuho, is an important detail.