From JoJo's Bizarre Encyclopedia - JoJo Wiki
(Redirected from Higashikata Daiya)
Jump to navigation Jump to search
This page contains changes which are not marked for translation. 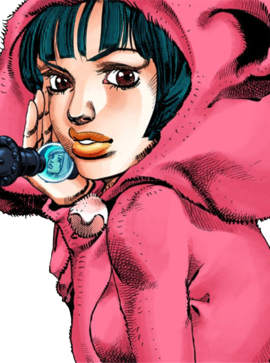 Daiya Higashikata (東方 大弥, Higashikata Daiya) is a side character featured in the eighth part of JoJo's Bizarre Adventure, JoJolion. Introduced as an antagonist in the "California King Bed" story arc, Daiya becomes a neutral character in subsequent arcs.

Daiya is the outgoing youngest of Norisuke Higashikata IV's four children. When Josuke Higashikata is introduced to the family, she develops a crush on him. Daiya is a Stand User and can take memories away with her California King Bed. 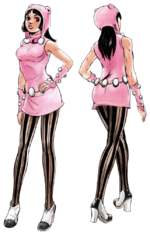 Daiya is portrayed as an outwardly "cute", petite teenage girl. She has long, dark hair (originally chin-length) with eyebrow-level bangs, and large, dark eyes. Her outfits usually feature headwear with faux bear ears and occasional vertically-striped thigh highs. She has a notably curvaceous figure; Kaato explains it is common for female members of the Higashikata family to have huge breasts up until age 20.[3]

Daiya is the youngest member of Norisuke Higashikata IV's progeny at 16 years of age. She personifies a certain kawaii, between the toy-like nature of her Stand's appearance and the game-playing it facilitates, her childlike possessiveness of and offense at Josuke Higashikata's betrayal and the playful manner of her speech. She is close to her father, who tends to spoil and is overprotective of her, and she returns this affection for her father.

She is infatuated with Josuke. After engaging him with her Stand, she assumes a threatening possessiveness and even seemed to display jealousy; however, upon her defeat, she settles for a warm preference. Josuke finds Daiya as an easy source of information and guidance in the Higashikata household by relying on her need for him to like her, as if to atone for her prior actions. However, he seems to have grown somewhat fond of her at the very least as a friend.

Daiya is severely sight-impaired, being barely able to see light or read a paper right under her nose, yet she is highly self-reliant and capable of orientation, at least within the family home.

She considers her Stand California King Bed a gift from God

Daiya's Stand, California King Bed, allows her to capture a person's memories after engaging and beating them in a unique game. There are specific rules in said "game" and if the victim/target breaks these rules one memory of theirs is taken. Once the memory is taken, the victim will not remember anything related to that specific memory.

Memories that are taken are placed into an item resembling a chess piece with a pearl in the middle of it and a picture that has something to do with the memory (e.g. a memory about riding a bike would have a picture of a bike). It is impossible to physically take the memories once they are inside and if the chess pieces are destroyed, the memories in them are lost forever. The only way to regain stolen memories is for Daiya to step in the victim's shadow.

Daiya was born the second daughter and youngest child of Norisuke Higashikata IV and Kaato Higashikata. When Daiya was two, she fell into the area where the Wall Eyes are nowadays. Her vision continuously worsened from that instant, but she acquired her Stand California King Bed in exchange.

At one point, Kaato went to prison but Daiya was too young to remember her, thus she forgot about her mother. 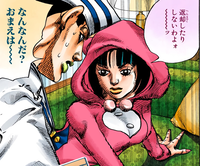 Daiya is first seen when Josuke is introduced to the family, she questions him if he likes the Misty Mellotron, an electronic instrument. When her father asks Josuke to look after her. She refuses to be treated in a special way for being blind, saying that he should act natural. She quickly infatuates herself with Josuke. Josuke slips up when he consciously puts a tea cup in front of her, thinking she might pour water on the table. California King Bed's ability triggers and a memory of a mark is extracted from Josuke. Daiya decides to explain to a worried Josuke the rules of the game she is playing with him. Every time she realizes Josuke is fussing over her, a memory of his is extracted. However, if Josuke can step on her shadow, he will recover his memory. Josuke realizes that in his state, that Stand is particularly dangerous, although Daiya seems more interested in flirting with him than outright harming him.

Josuke is almost seduced by Daiya

Daiya asks Josuke to accompany her to her bedroom as she wanted to change her clothes in order to go shopping. While she is in her closet, Josuke uses the opportunity to have Soft & Wet plunder the sound from the closet's light switch when he flips it off. Thus, the light of the bedroom would create a shadow of Josuke in the closet that Daiya would step on. However, she hears Josuke make an unnatural movement and easily deduces his plot. Josuke tries to switch the light on, but Daiya doesn't let him move. He decides to run for the phone to call his only ally Yasuho but as he composes Yasuho's cellphone number, his memories of her are extracted. Daiya sees that Yasuho's memories have been extracted and decides to use the fact that she is now the only woman Josuke has any significant memory of to seduce him. She and Josuke lie together on her bed, and Daiya asks Josuke to propose to her. Josuke almost falls for Daiya when the bubble in which the switch's sound was stored pops, prompting Daiya to abandon her seduction and check if Josuke isn't tricking her again. Discovering nothing, she decides to go shopping.

Josuke tricks Daiya into stepping on his shadow.

Daiya and Josuke begin to leave the estate. This time Josuke fakes being still behind Daiya by extracting his voice and popping the bubble near her, and hangs on a nearby tree branch. However Daiya notices that Josuke isn't hugging her. Josuke's memory of his Soft & Wet are extracted, to Daiya's delight. However she begins to hear the ringtone of her cellphone inside the house. Josuke then reveals that he hid the phone and remembers having called someone important to him. Daiya gets angry over it and almost destroys the memory of Soft & Wet. She then forces Josuke to go fetch the cellphone, following him closely. It is revealed that Yasuho is calling back Daiya's number. Josuke retrieves the cellphone and on Daiya's order, closes the fridge's door. When Daiya realizes that it is Yasuho on the line, she snaps and almost destroys his memories. However Josuke then comments that Daiya is stepping on his shadow right now.

Josuke regains all his memories and explains that he used the phone as a final bait. He planted a bubble prior to going out of the house, which would store the closing sound of the door. Because Daiya is blind, Josuke could fake the door being closed by having the bubble pop, all while the memory of his ability was stolen, which would guarantee his honesty. Daiya is defeated. She fears that Josuke won't love her anymore, but Josuke reconciles with her, and asks her to help in his investigations. He even kisses her in the cheek, to Daiya's satisfaction. Afterwards, she explains that the mark is a publisher's mark at the same time Josuke and her break into the upper room which is an office donned with a library.

Subsequently, Daiya still clings to Josuke but doesn't make any further effort to antagonize him. When Jobin returns, Daiya is given a coconut ashtray, which amuses her despite the fact that she doesn't smoke.

Hato eventually introduces her new boyfriend Tamaki Damo to her whole family, including Daiya who is excited at the prospect of meeting her sister's first boyfriend. Since she is blind, Daiya asks Josuke if Damo is handsome but Josuke prefers not to comment. When a fax for Josuke arrives, Daiya takes it and barely reads the name "Josefumi Kujo" on it. Daiya runs to Josuke in the foyer to hand it the paper. However, Damo is revealed to be the malevolent leader of the Locacaca Organization's trade group. Damo's Vitamin C liquefies her on the spot. However, Damo is eventually defeated by Hato and killed by Josuke, making everyone return to normal.

One morning at the Higashikata's, Norisuke begins his morning breathing exercises while Daiya leaves a DVD box on the couch. Daiya mentions the DVD, which is from the exercise guru Miki Ryousuke, and Norisuke goes pick it up, Kaato finally giving it to him. It takes a while for everyone to properly register that a strange woman is sitting on their couch. Kaato, berating Norisuke for having never mentioned her, comments on how Daiya, Joshu and Hato have grown, exposing herself as their mother. Daiya, curious about Kaato, is told by her mother to come hug her, but Joshu pushes a chair and makes Kaato trip. Joshu then begins to antagonize Kaato, then tricks her into undressing herself, exposing his skepticism about Kaato's relationship with the family. Kaato's cards fall over, causing a curious Joshu to pick them up, but a chair suddenly appears from one of them, impaling Joshu in the jaw. Furious, Kaato scolds Joshu for underestimating her and is outraged that her love for her family isn't returned. Kaato leaves offended while Jobin enters the family room and nonchalantly reveals that he was the one to let her in.

Daiya is subsequently seen having breakfast at her family's home, during which she eats a bunch of Joshu's fish sausages.

She is then present at the meeting between the Higashikata Family, Josuke and Rai Mamezuku, Norisuke's plan appraiser. She doesn't say anything until Joshu proposes to turn the burned down orchard until the site for a mushroom hunting tour, at which point Daiya tells him that everyone has left already but expresses her support as a fellow younger sibling.

On the day of the harvest, a string of events result in the Higashikata Family catching Jobin and Mitsuba trying to drown Paisley Park. Daiya is forced to see her family tearing itself apart as Norisuke exposes Jobin's murder of Ojiro Sasame and Jobin induces a heat stroke in Norisuke with Speed King. Jobin then tells her to help move the unconscious Norisuke to the second floor. Eventually, the family also realizes that Jobin is also a victim of Akefu's Stand.

Daiya makes a cameo appearance in JoJo's Bizarre Adventure: Eyes of Heaven. She appears inside the Higashikata House on the Part 8 stage, sitting alongside Hato and Jobin on the couch.

She's also a support in the game, having one voice line performed by Saori Hayami