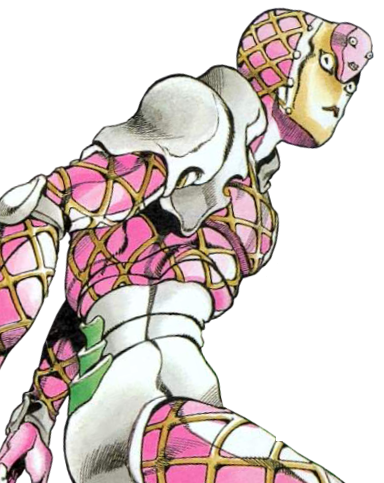 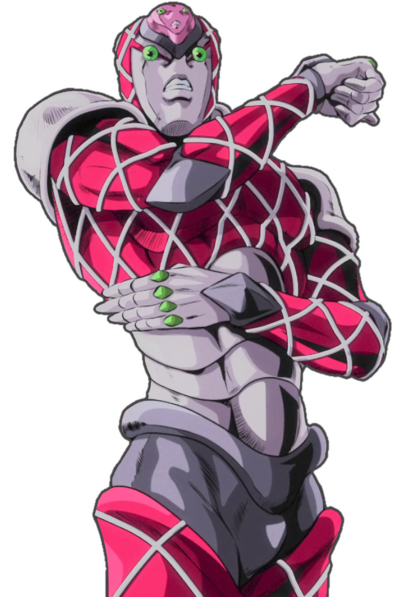 Destructive Power
A
Speed
A
Range
E
Stamina
E
Precision
?
Developmental Potential
?
A
B
C
D
E
A: Very Good
B: Good
C: Average
D: Poor
E: Very Poor
SPOILER WARNING: Part 5 spoiler details may follow.
“
Only the results! It is only the results that remain in this world! All the actions you take in a world where time is erased are meaningless! (『結果』だけだ！！この世には『結果』だけえが残る！！時間の消し飛んだ世界では「動き」は全て無意味となるのだッ！“Kekka” dake da! ! Kono yo ni wa “kekka” dake ga nokoru! ! Jikan no keshitonda sekai de wa `ugoki' wa subete muimi to naru no da~!)
”
—Diavolo, Chapter 520: The Mystery of King Crimson, Part 3

Its design is inspired by the character George/Kuato, from the 1990 science fiction film Total Recall, a mutated human with a smaller twin brother conjoined in his belly.[2]

King Crimson is a powerful Close-Range Stand that primarily uses swift single attacks that are almost always fatal. It is able to punch through people's bodies or cleave them in a single chop with significant ease. Other examples include completely obliterating a fortune teller's upper body in a single punch and throwing a pair of scissors with such strength that they completely severed Risotto Nero's right foot, among multiple other occasions where it effortlessly severed limbs. It also managed to destroy a large wall with a single punch. Its feats of strength and speed are comparable to Star Platinum and The World.

King Crimson's signature ability is to erase a given frame of time lasting up to 10 seconds,[5] starting from the instant the ability is activated.[4][6]

In the erased time frame, other people will be unable to experience anything that happened[6] and will retain no memories of it either.[6][7] After the allotted time frame, they will suddenly find themselves in the situation they were supposed to be afterwards.[4][6] There is, however, one instance where a person was able to see their double before finding themselves in their future position.[6]

On the other hand, Diavolo remains fully conscious during the erased time and only he can re-adjust his actions.[7] In the manga, Diavolo sees the erased time as a void filled with juxtapositions of what would have happened during this period in a fashion akin to Nude Descending a Staircase, allowing him to think out the next best action (for instance, when Bruno Bucciarati tried to punch Diavolo during the erased time, Diavolo saw Bucciarati's superimposed positions during his punch).[7] The anime adaptation has Diavolo visualize a ghostly red image of his foe's next move instead. Diavolo is unable to attack, or interact with anything, while King Crimson's time erasure is active, as the time frame of his own actions would cease to exist as well. The only exception to the latter is Diavolo himself, and any extension of himself, such as his own blood.[8] As a result, he often relies on the ability to avoid attacks and move himself into advantageous positions, such as enemy blind spots. Using his Stand's exceptional destructive power, Diavolo then directly attacks the enemy the moment King Crimson's ability concludes.[8]

The image produced includes the general area with Doppio/Diavolo as the main focus, allowing either of them to see what happens around them as well as directly at them.[10] However, the visions are incomplete and only show the final result without the steps taken to it and thus can be subject to interpretation. In one instance, Doppio could see himself on the ground with a foot flying, but initially thought that the foot was his when it ultimately turned out to be Risotto’s.[11]

While the predictions seen by Epitaph are unavoidable, they still effectively warn Diavolo and Doppio against incoming danger, allowing them to steer events to minimize the damage done to them. When Doppio realized a pair of scissors would form under the skin of his neck, he tore them out to prevent his throat from being slit.[11] King Crimson itself can prevent the predictions from being completed if it erases the right timeframe. However, Diavolo can only change his own fate with this but not others' fates, as he can't interact with them in erased time (i.e He can't prevent Risotto from getting shot by Aerosmith's bullets, but he can erase time and prevent himself from getting hit). Likewise a Stand affecting Fate like Gold Experience Requiem which returns King Crimson's power to the "zero" state, can simply make the vision false as it steers Fate itself to its advantage.[12]

Concept art featured in the JOJOVELLER "History" booklet includes an early design of King Crimson, which lacks Epitaph (but still has the bump on its forehead where Epitaph would normally be) and has a facial structure appearing to be based off of a human skull, as well as what appears to be a hood (possibly inspired by the classical figure of Death).