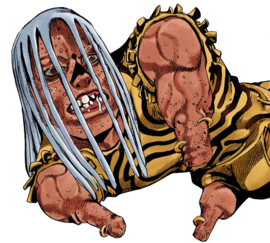 Dolomite was originally a handsome man. Wearing an undercut, the hair on his sides was shaved down whilst the hair on his crown was pulled to the right of his forehead. He wore an exotic striped jacket over a dark, long-sleeved shirt.

After his body was destroyed, Dolomite's appearance drastically changed. His entire body and skin took on a more rock-like appearance, with a rougher complexion and cracks in his skin. Dolomite's arms and legs are reduced to stumps while his teeth are broken and cracked. His eyes are duller and a strange marking exists above his nose, in the form of a triangle with a small circle above it. His hair has grown out much longer and is unkempt, hanging over his shoulders. As for clothing, he still retains his exotic jacket but nothing else.

Little is known of Dolomite's past personality. In the past, Dolomite was an easy-going man. His idea of paradise was inspired by the novel The Blue Lagoon

, referring to a tropical paradise isolated from the rest of the world. At that time, he also cared for another woman. In fact, he saved her from electrocution at the cost of his own body.[4] Dolomite still harbors some feelings for her and expressed a desire to seek her out and invite her to the "Blue Lagoon".[5]

Despite the destruction of his body, his mind is relatively sane, although he does display animalistic behavior at times. He is also extremely nihilistic, likely due to the fact he cannot participate in society any more.[6] He is not interested in the Locacaca operation, and whilst commenting that it will be "lonely", he does not show any grief to his fellow Rock Humans.[6] The reason given as he has nobody left, he can not participate in an equivalent exchange process. While Dolomite states he is actually content with living near the Mutsukabe-Hill pond,[7] he becomes interested in the new Locacaca's healing properties when Jobin explains Josuke Higashikata's history and cooperates with Jobin.[8] Despite his independance, he is aware of the existence of the Locacaca Organization's upper echelons and is frightened by them, to the point he warns Josuke and Yasuho to not seek the Locacaca further.[9]

As a Rock Human, Dolomite has little concern about harming humans. His crude control over people means that they will probably harm themselves as they try to grab a target, and Dolomite was ready to drown Josuke when he was done with him.[10] However, he shows a measure of restraint when he asks Jobin first if the latter is alright with collateral damage.[11]

Dolomite motly eats frogs by turning into rock and luring them near him, but seems to be fond of fried chicken, as it is the food Jobin used to lure him out.[12] It is known that he also attacked pet pens or farms in order to eat rabbits and chickens.[13]