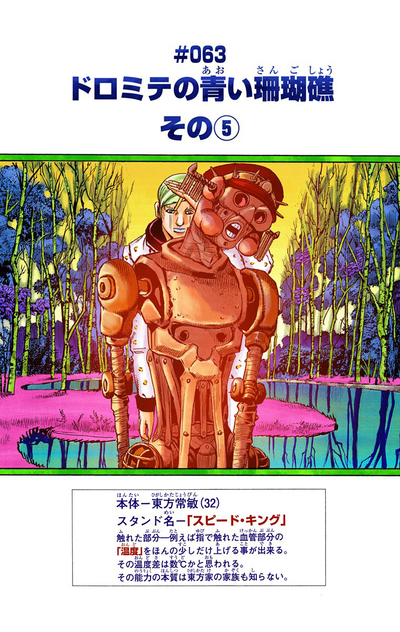 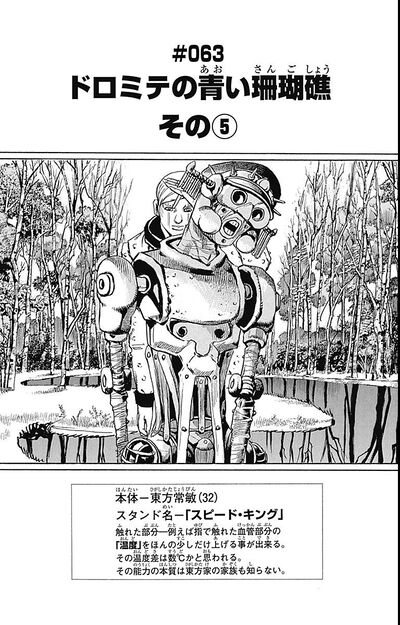 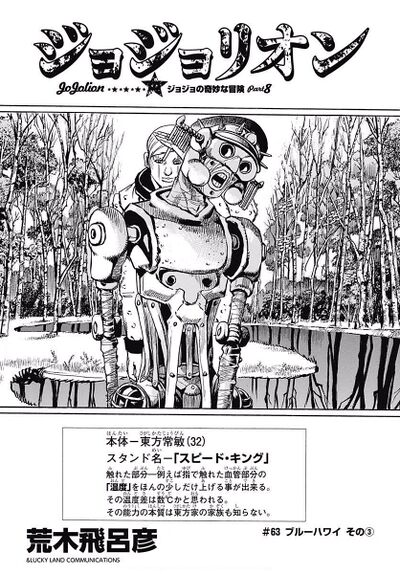 Yasuho wakes up from her blackout, realizing that somebody just attacked her and stole the clues she needed. She worries about Josuke.

Meanwhile, Josuke has taken a taxi cab in order to flee more rapidly from his attacker. Having been trying to call Yasuho, to no avail, Josuke decides to get off the taxi. At this moment, Josuke hears a violent bump. He turns back, but sees no one, and the taxi driver, having heard the noise too, decides to go investigate its source. From the corner of the back window, Josuke spots blood flowing, and warns the driver to stay away from it. He then spots a bird lying on the ground, and understands that the enemy Stand can control animals too. Unfortunately, the driver has touched the blood despite Josuke's warning; controlled, the taxi driver begins to slide inside the cab through the opened door, but Josuke violently kicks it, slamming the driver away.

To his horror, Josuke notices a swarm of flies around the taxi driver, and one of them starts flying toward him. Josuke flees from the other side of the car and runs up to an Owson store. His entry is so violent that he crashes into one of the sections, with the fly on his tail. Josuke grabs a can of insecticide and sprays the fly which falls onto the ground, only to rapidly crawl toward Josuke. Thus, Josuke retreats further inside the store and corners himself into the lavatory. Planning to take advantage of the fact that the enemy always attacks in a straight line, Josuke leaves the door slightly open in order to trap the fly and swat it with his bug spray can. However, Josuke spots a fallen baby carriage with the mother laying besides it. Slowly realizing what has happened, he hears something crawling behind the door as an infected baby is now coming toward him. The fly touched the mother, who hit her head, and some blood sprayed onto the baby who is now the new infected. The baby now relentlessly tries to crawl into the bathroom, gravely hurting himself in the process. Unable to simply let the baby die, Josuke releases his grip on the door, and gets touched. Blue Hawaii immediately possesses Josuke, who mindlessly begins to walk away from the store.

At the pond, Dolomite sees Josuke, who's finally arrived. Remarking that it took some time to finally catch him, Dolomite then orders Josuke to walk into the pond and drown, taking the mobile phone at the occasion. Before Josuke can fully enter the pond, the Rock Human has Josuke reveal that he planned to meet a plant appraiser in order to find the Locacaca. Satisfied, Dolomite then orders Josuke to immerse himself, and declares himself the winner. Distracted at the idea of finding his old girlfriend, Dolomite is surprised when someone bashes his head with a metal bar.

The attacker is revealed to be Yasuho, who orders Dolomite to release his control over Josuke. Dolomite, confused by who is assaulting him and why, understands that Josuke contacted her and that she trailed him up to the pond. Yasuho acquiesces and begins her interrogation; since someone else attacked her, Yasuho asks Dolomite who was his accomplice. The Rock Human turns to stone, but unfazed, Yasuho pushes him into a mud pit. Unable to escape by himself, Dolomite turns back to normal and begs Yasuho to stop. He reveals that it was Jobin Higashikata who came and asked him to attack Josuke, and that Jobin was a gofer for the Locacaca Smuggling Organization.

Dolomite also comments on Josuke and Yasuho's lack of understanding about their situation, and describes approaching the Locacaca as incredibly dangerous, all the more if it has turned into a new species.