In JoJo's Bizarre Adventure, the existence of alternate universes, realities or dimensions is a recurring concept. It is mainly conceptualized as the premise behind certain Stand abilities.

Vanilla Ice's Stand, Cream is able to devour itself and its user to become a void that devours everything it comes in contact with. Vanilla Ice describes it as an infinite dimension of darkness, though he is unsure himself where exactly the objects are sent to. While in this dimension, Vanilla Ice and his Stand are invulnerable to attacks.

Okuyasu Nijimura's The Hand is similar to Cream, able to erase whatever space its right hand touches. Okuyasu states that not even he knows where the voided objects go, but it seems the objects are eliminated like an extremely sharp blade had sliced clean through them. This ability allows the normally short-range Stand extreme distance in its attacks, as it can simply remove the space between itself and a target to bring them within range. 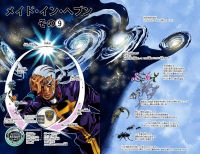 Made in Heaven's power is to dramatically speed up the flow of time; achieved through its ability to control the gravitational forces of the earth, moon, and seemingly the entire universe (in reference to aspects of the theory of relativity).

As time continues to accelerate, the universe will eventually come to an end and reach a singularity point. After this point, a new universe will be created. The most esoteric property of the new world is that the people who have been brought there will technically have lived everything that has happened and will happen to them in the previous universe, ignoring whatever happened during the time acceleration itself. According to the principles of fate, everything that has happened in the old universe will happen again in the new universe, resulting in a sort of cycle.

If Pucci is killed before the point where the original acceleration of time began, then fate is changed. After another singularity point, the universe will revert but fate will have changed significantly, though the force of gravity between individuals appears to persist. After foiling Pucci's plan, Emporio thus meets with alternate selves of Jolyne, Anasui, Ermes and Weather Report, all of whom are living different lives from their original counterparts.

The hooks and cables stored inside of Pork Pie Hat Kid's mouth are said to go through another dimension when Pork Pie Hat Kid sends them into a bowl of water.[1] The hooks then surge from this dimension into the original dimension through the bottom of a specific object, from example a bird feather or even a beetle.

President Funny Valentine's Stand D4C allows different parallel worlds/dimensions to co-exist at the same time and/or in the same place. It also allows its user to visit these parallel worlds/dimensions and interact with them. Valentine travels by being closed between two objects, shown first by the use of a door against a wall. This method allows practically anything to travel between dimensions, including other people. Valentine takes advantage of this towards the end of Steel Ball Run to bring forth Diego Brando from a Parallel World to aid him. It is noted that anything that comes in touch with any of its alternate universe counterparts, be it an object or a person, will be destroyed, which applies for both entities. This applies for dead bodies and their alive counterparts, as well.[2] The only exception to this rule is Valentine himself, who can bring other Valentines to this world and interact with them without getting harmed.

In JORGE JOESTAR, the 37th universe's incarnation of Reimi Sugimoto is a Stand with an ability named Cube House. Its interior has a tesseract structure and functions as a time traveling device allowing anyone to travel to different universes and time periods. Its primary usage is to take the person using it to go where someone needs their help the most. 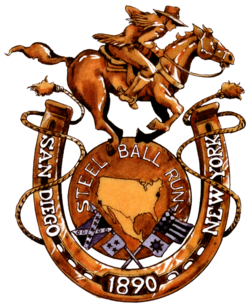 The Steel Ball Run universe (SBR universe) is an alternate world within the setting of JoJo's Bizarre Adventure. Its name is derived from the first story set in this new world, Steel Ball Run and also encompasses its successor, JoJolion. There exist a number of names, events, roles, personalities, and relationships appearing in Steel Ball Run and JoJolion similar to those in the original timeline.

Hirohiko Araki indicates in the All-Star Battle guidebook that Diamond is Unbreakable and JoJolion are parallel worlds not linked in time or space, and that their respective characters will never meet each other in the manga, including both Josukes and Rohan.[3]

Steel Ball Run, set in 1890, follows Johnny Joestar and Gyro Zeppeli, characters with a number of ostensible similarities to Jonathan Joestar and Will Anthonio Zeppeli. Johnny is learning the Spin, a mystical power comparable to the Ripple, from Gyro, an Italian expert in the art, similar to Will.