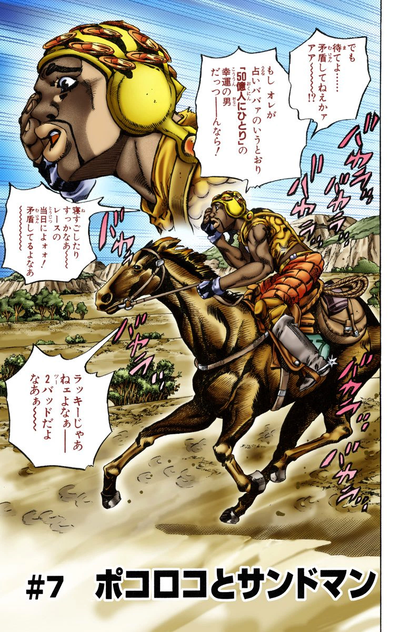 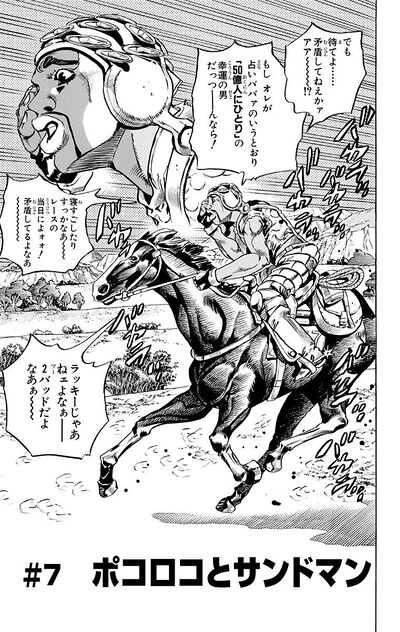 Pocoloco remarks on how unlucky he is to sleep in on the day of the race, but soon changes his mind after seeing how fast his horse is moving due to the ground being trampled and beaten by the other racers' horses. Humorously, he passes by Baron Roocatugo, whose automobile is immobilized because it just consumed the entirety of its gas soon after the start of the race. Roocatugo thus realizes that crossing the continent is impossible and his servant advises him to return home.

As Pocoloco catches up to the group, manure starts flying up into his mouth, making him lose confidence in his luck. However, he realizes he also caught a gold coin in his mouth. Beside him, a female racer is disgusted at the manure on her clothing and tries to wipe them off, but accidentally opens her shirt, allowing Pocoloco to catch a glimpse of her cleavage. Another racer tries to wipe off the manure on his face, making an impromptu beard; just then, Pocoloco sees a wanted poster of a bearded man resembling that racer with a bounty of $500. It is at this point that Pocoloco starts regaining faith in his luck.

Once he catches up to the rest of the racers, they arrive at a cliff, and one racer complains that they have gotten off track because they were following Sandman. Standing on the top of the cliff and doubting his luck once again, Pocoloco watches Sandman climb up the other side of the ravine, while the other racers complain. As they consult their maps or decide to go back, Pocoloco has his horse run off and jump over the cliff, promising to himself to win the race as he tries to reach the other side. His horse barely lands on the edge, and is about to fall over, when Sandman, seeing this, tells Pocoloco to use his rope to lift his horse up to top side of the cliff. After reaching the top, Sandman and Pocoloco both race ahead, while Pocoloco wonders if Sandman came all the way from the beach at that pace. He thinks to himself that although he got help, the fact that he jumped over the cliff proves his luck.

Pocoloco catches up with the main group of racers as they reach the last third of the first stage with Gyro in the lead. Pocoloco asks Johnny if Gyro is the leader. Johnny thinks that Gyro's horse will begin to tire soon. For Johnny, the race is not about winning or about the prize money, but about catching up to Gyro and learning the mystery of the Steel Balls. The easiest way to get Gyro's recognition is to beat him in this stage.

Meanwhile, Gyro heads off course into the brush on the right. If he makes it through, he can shave 800 to 1,000 meters off his running distance, but there are many obstacles in the forest. Eight horses follow Gyro into the forest, including Johnny and Pocoloco. Johnny notices that Pocoloco has his eyes closed with an expression of confidence, as if he is testing himself. 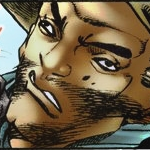 Author's Note
“
The CDs I've been listening to a lot recently are the new Norah Jones album and the soundtrack to The Good, the Bad and the Ugly.
”
—Hirohiko Araki
“
最近よく聴いてるCDはノラ・ジョーンズの新譜と「続・夕日のガンマン」のサントラ
”
—Hirohiko Araki