Urban Guerrilla and Doremifasolati Do, Part 2 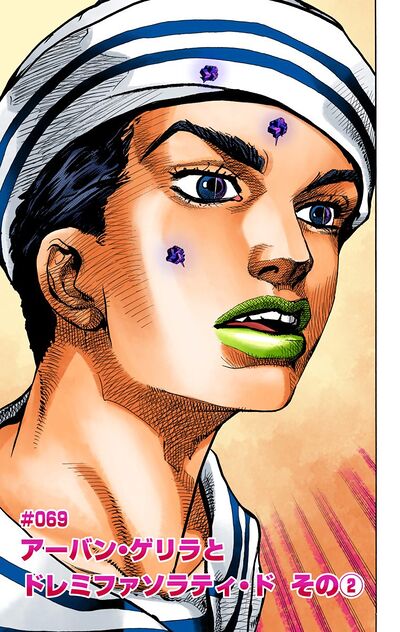 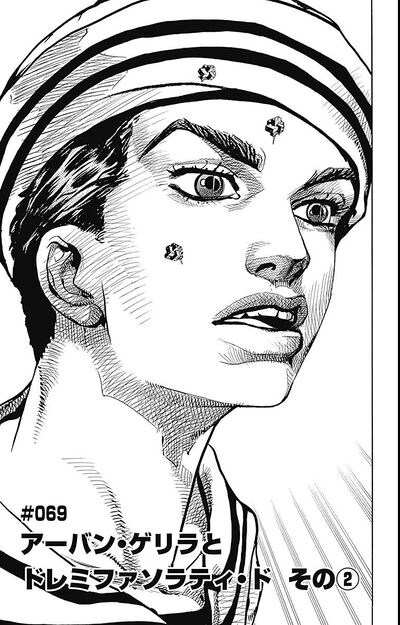 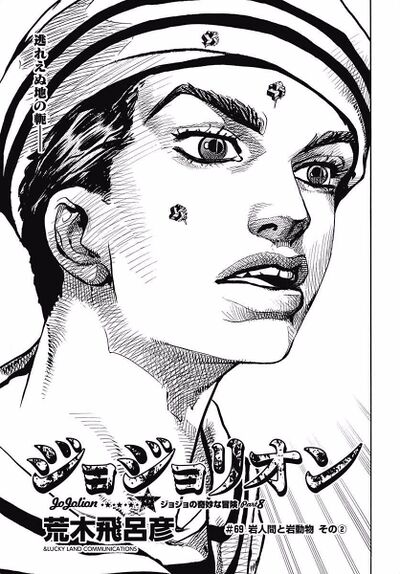 Urban Guerrilla and Doremifasolati Do, Part 2 (アーバン・ゲリラとドレミファソラティ・ド その②, Āban Gerira to Doremifasorati Do Sono 2), originally titled The Rock Human and the Rock Animal, Part 2 (岩人間と岩動物 その②, Iwa Ningen to Iwa Dōbutsu Sono 2) in the UJ release, is the sixty-ninth chapter of JoJolion and the nine hundred sixteenth chapter of the JoJo's Bizarre Adventure manga.

The mechanism of Brain Storm is explained: The crystal-like Stand operates by grabbing onto the victim's skin with hidden feelers and digs their way into the body and blood stream. Being toxins, they are able to cause hemolysis and will multiply exponentially and bore gaping holes in the body.

Urban Guerrilla gloats, as his target Rai Mamezuku is in a desperate position; Brain Storm is digging into Mamezuku's body, while Josuke and Yasuho are cornered by Doremifasolati Do. As Urban Guerrilla threatens to turn Mamezuku into a shoe lace, Yasuho begins to despair as she assumes the situation to be her fault. Josuke interrupts her, stating that their predicament is simply due to the difference in offensive power between them and the Rock Humans.

Meanwhile, Urban Guerrilla starts to rant about the impending doom of humankind. In his mind, although the Locacaca is a miraculous cure or a source of income for mere humans, the Rock folk have been using the fruit for a considerably longer time and it is tailor-made for them; on the contrary, humans and Locacaca have poor compatibility due to differences between carbon-based life and silicon-based life. Beyond the limited use the Higashikata Family and by extension humans have for the new variety, the new Locacaca, Urban Guerrilla claims, will allow them to shift the hierarchy between humankind and the Rock Humans.

Unfazed by his wounds or Urban Guerrilla's speech, Mamezuku unravels his arm and crafts it into a crossbow-shaped slingshot with which he shoots a fork toward Urban Guerrilla, hitting him above the eye and shattering his goggles. Urban Guerrilla cries out in pain and orders Brain Storm to increase its damage, but Mamezuku already prepares a second fork. Despite the countless holes covering his body, Mamezuku manages to shoot the fork but unfortunately misses, it ends up landing on the pole instead. The plant appraiser subsequently falls to the ground. Victorious, Urban Guerrilla descends the pole and begins shouting menacingly at Josuke.

For his part, Josuke looks at Mamezuku, and seeing the determination in the eye of the plant appraiser, is impressed and understands why Norisuke considers him a valuable ally. Despite Yasuho's pleas, Josuke jumps to the ground, intending to take down Urban Guerrilla at the risk of being badly hurt. Josuke runs to the base of the seventh pole under Urban Guerrilla's unimpressed gaze, while being pursued by Doremifasolati Do who is already grazing his feet. Ominously stating that careless humans will end up forever below the rocks, Urban Guerrilla challenges Josuke. The Rock Human then jumps down, deploying Brain Storm to bore into the soil below him, allowing him to dive underground immediately and enter his partner's shell before Josuke can reach him. Josuke begins to sink into the ground, as Yasuho panics and Mamezuku attentively watches.

Author's Note
“
I go to a dentist office run by two identical sisters. They're great doctors, but it's frightening when they approach you at the same time.
”
—Hirohiko Araki
“
そっくりな姉妹でやってる歯医者に通ってる。名医なんだけどさ。2人で来ると怖いよォ。
”
—Hirohiko Araki