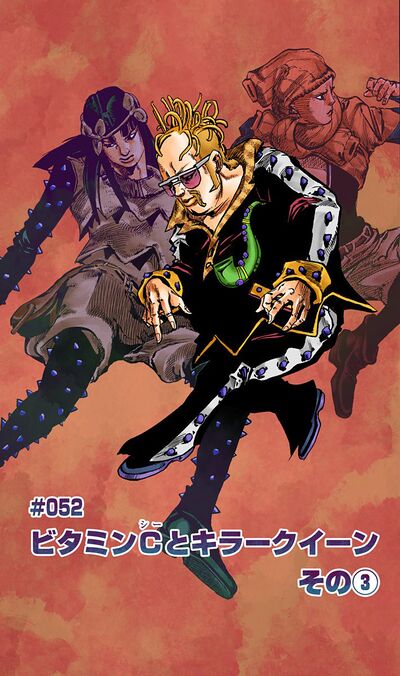 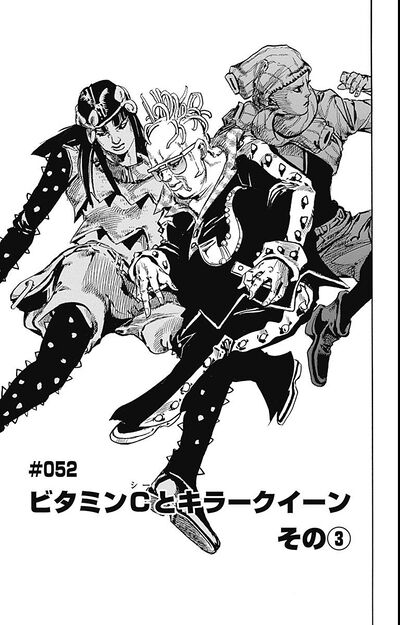 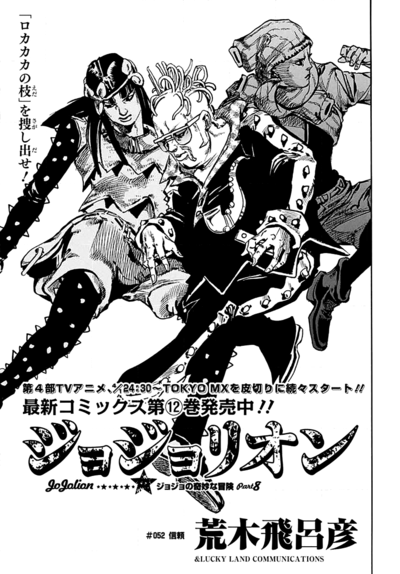 With Josefumi and Kira trapped, Damo ominously folds a 1,000 yen bill and proceeds to cut off Kira's liver with the bill and uncovers from the cut off body part his cellphone. Examining this and Josefumi's cellphone, he sees that there's no trace of the Locacaca on these. Damo then goes into a rage, calling the duo's pathetic attempt at hiding their trace conceited and throws the phones into Josefumi, which then sink into the water. Calming himself, Damo then declares that he is going to kill one of them and spare the other. He clarifies by saying that whoever reveals where the Locacaca branches were grafted will be spared completely but won't be allowed to cultivate them, adding that his mercy is due to a sense of responsibility for letting the secret of the fruit leak.

Now pushing the 1,000 yen bill deep into Josefumi's skull, Damo tells him that since he isn't tied to Holy, he is the one he'd rather spare and tells him that there's no reason to lose his life. Josefumi, in tears, recall the moment his mother almost left him to die in the ocean, and tells himself that he's always been abandoned in his live and might as well abandon someone too.

Suddenly Kira tells Josefumi to get ready to flee, and that their comrades are coming. Kira then tells to a surprised Damo and Yagiyama that he is going to track down every last one of them and seize the Locacaca. Incredulous, Damo reminds him that they are a two-man team, only for Kira to belittle him for his inability to find the branches. Karera is then seen coming toward the boat, believing that Josefumi just called her. Yagiyama has Karera pinned down with I Am a Rock, and everyone sees with surprise Josefumi's phone in her hands. As Kira apologizes to Josefumi for dragging him into this mess, Damo sees Sheer Heart Attack hidden in Karera's hair, and before he can do anything, they explode. The whole pontoon, Kira's boat and several infrastructures surrounding it are destroyed by the blast, Damo and Yagiyama are flung away and lose several moments recovering from the explosion. Karera also survives, and surfaces out of the water, her hair incinerated.

At the same time, Josefumi has managed to drag Kira on land farther north, and desperately drags his seemingly dead corpse toward where they grafted the Locacaca branches, confessing in tears that he was going to reveal to the Rockmen their secret. He asks for forgiveness and plans to feed one fruit to Kira to save him. In the marina, Damo changes his plan to simply killing the duo, deducing that they are in the poaching shore due to the water flow. He calls for Aisho and the A. Phex Brothers to search the area and watch the train stations and hospitals. Meanwhile, Karera is hiding in the water.

Josefumi tries to feed Kira the Locacaca, but the latter doesn't respond at all, being dead. Still determined to save him, Josefumi feeds Yoshikage the fruit with Soft & Wet's help.

(Mentioned only)
A. Phex Brothers
Stands