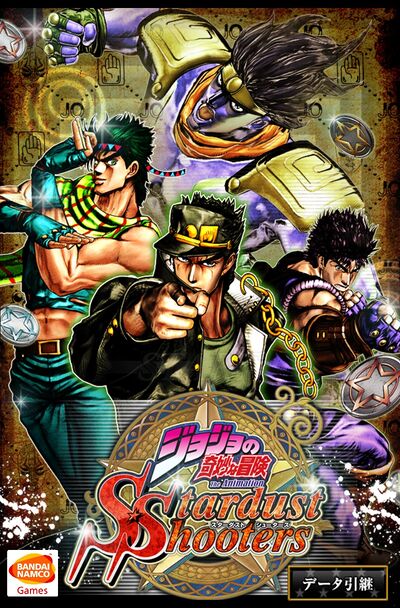 JoJo's Bizarre Adventure: Stardust Shooters (ジョジョの奇妙な冒険 スターダストシューターズ, JoJo no Kimyō na Bōken Sutādasuto Shūtāzu) was a free IOS/Android game released in 2014 exclusively for Japan. The game was a mobile spin-off of JoJo's Bizarre Adventure: All Star Battle and initially focused on the first three parts of the series: Phantom Blood, Battle Tendency, and Stardust Crusaders. As of December 2015, Diamond is Unbreakable was added, and as of September 2018, Vento Aureo was added.

On February 15, 2021, it was announced that the game would no longer be available to play. The game's servers were officially closed on April 13, 2021.

The game features Medals, particularly "Striker" Medals (AKA units), each of which represents one character and their ability set. These units make up a team, in which there can be 5 Medals (a Leader, 2 regular frontline units, a Standby unit, and a Friend/Guest unit which can be chosen at Quest selection). Like many mobile games, a Stamina system is used which regenerates over time and lets you play the game's Quests. Each quest takes a certain amount of stamina to enter, and consists of 1 or more Rounds. These rounds contain 1 or more waves of enemies the player is required to defeat to complete the round. Completing every round means completing the current quest and claiming it's rewards. 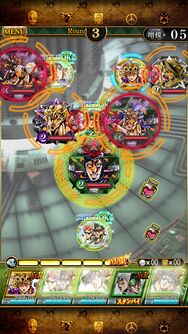 During gameplay, the player is presented with the battlefield, where the player's team, enemy units and items are shown. At the top of the screen there is a Menu button (which can be used to quit the current Quest, access the options menu, and see descriptions of status effect icons), an indicator which shows the current round number, and another indicator which shows the remaining enemy reinforcements. The the bottom of the screen shows the Skill Gauge bar, allied units' portraits and their health. Tapping on one of these portraits shows the selected unit's ATK and HP stats, any buffs or debuffs, status effects, Break Skills, their Command Skill and it's Skill Gauge consumption, and available Soul Chips.

Combat is done by the player pulling on one of their available units, and then releasing it. The unit will continue to move until it runs out of movement or it's stopped by an enemy or item. During movement, the unit can hit enemies, which is called a contact hit. A contact hit will deal the unit's damage to the enemy that was hit. If the enemy was hit on their weakpoint, that contact hit will deal 50% more damage and will also add +1 to that enemy's action count.

Smash is a type of attack performed manually by the player. It can be done by tapping on the screen during an allied unit's movement. The attack itself deals damage in an area around the unit, deals 50% more damage than contact hit, and it will stop the unit's movement. This attack however cannot be done by enemies.

Items can be placed on the field by both the player and enemies and they come in various shapes and sizes. Healing items are the most common as they can be dropped by any enemy when it dies, when it's dropped and how much it heals is random however. Traps deal damage and may inflict a debuff or status effect, like Death 13's eyeballs which deal a small amount of damage and lowers movement distance for the unit that ran into it. Traps placed by enemies can only be hit by the player's units and vice versa. Items can also be destroyed by specific abilities the player can use, or sometimes by the enemies themselves.

Area Skills are auras that some enemies may have. Most of the time these auras appear around the enemy but it can also be placed on the walls on certain quests. These auras inflict status effects onto the unit that moved inside it during it's own movement. The effects of Area Skills cannot be removed or bypassed using "debuff immunity" effects, only by certain Break Skills. Each unit has up to 2 Break Skills, and each Break Skill corresponds to an Area Skill that it nullifies. The exception to this is the Destruction Break Skill which instead of passively nullifying a specific type of Area Skill, it instead destroys any Area Skill the unit with Destruction touches. The only catch is that this can only be done a limited number of times per quest.

Soul Chips can completely heal a unit during a quest if they are below maximum HP. Each unit has a limited amount of these chips and once used, can be bought back with gold, or the player can wait and get 1 soul chip for each unit for logging in daily.

Skill Gauge is one of the player's main resources which is split into 5 segments called "bars". It can be gained by hitting enemy units with the player's units, or using abilities which specifically generate Skill Gauge. It's main usage is to activate a unit's Command Skill, but has many other uses like reviving units or gaining buffs. Each unit's Command Skill requires different amounts of Skill Gauge to activate.

Skill Gauge can also be affected by enemy units like lowering Gauge gain, or draining it outright.

Turns is one of the ways that the game keeps track of time as it is a turn based game. A new turn will begin once the player has moved all of their units. Units can only be moved once until the next turn starts at which point they will become selectable again.

A move is a sub-section of time that the game keeps track of. A move begins when a unit is moved by the player and ends when said unit stops moving.

1-mores are moves granted to a unit if it defeats an enemy during it's movement. It traditionally counts as a seperate move, but move-based timers (x effect is active for y moves) do not decrement when gaining a 1-more.

Action Count is a mechanic used by enemy units and can be seen to the left of their health bar. It tells the player which enemy will take it's own movement in how many player-made moves. This however can be manipulated by the enemies and their abilities, like lowering it if certain conditions are met.

Leader Skills are passive effects every unit has. Each unit's Leader Skill becomes active if they are in the Leader position on the team. These effects are not tied to the Leader unit, meaning if the Leader dies, the effect won't disappear. Same goes for debuffs and status effect. If a unit's leader skill generates skill gauge, and an enemy is present which reduces skill gauge gain of the player's units, the leader skill's gauge gain won't be affected. Most of the time leader skill effects grant stat buffs to certain units or generates skill gauge either at the start of a round or the start of a turn. Which unit the leader skill buff is granted to is determined by the attribute or tags that a unit has.

Friend units you choose to take on quests with also have their Leader Skill active, but only if the player whose unit you are using is on your friends list.

A chart showing the advantages and disadvantages against each attribute.

Units also possess different attributes: Red, Blue, Green, Black, White, Gold and Silver. Each color has an advantage and a disadvantage over specific others. Abilities can interact with attributes in a number of ways, like dealing more damage to a specific attribute or just changing a unit's attribute outright.

Tags define a category that a unit belongs to, like: Stand User, Hamon User, Joestar, Gang Member, etc. These can affect gameplay is various ways, like some enemies can have an ability which makes them take more damage from units with a certain tag, or the Cactus trap that can be placed by Donovan, which deals damage to units that touch it except if the unit is a Hamon User.

Command Skills are special attacks that each unit has. A unit's Command Skill can do a variety of things from simply dealing damage to stopping time and disabling enemy abilities. They require a certain amount of Skill Gauge to activate, which can be done by tapping on a unit with the "SKILL OK" message above them before pulling the unit to move them. Once it started moving, it instantly depletes your Skill Gauge by the amount required and the player can tap to activate the Command Skill. These can also be leveled up (to a maximum of lvl 20) by feeding non-Level-Up material medals (AKA units that can be put on a team rather than only being useful as Level Up material), or Zeppeli Frogs to the desired unit.

Command Skills can be done by enemies as well. The players can see when an enemy is about to activate it's Command Skill if the enemy has purple sparks all over him.

The game contains characters seen in the first five parts of the series. Every character can be selected as one of the main party, containing a total of up to 5 characters (4 at the beginning of the match and 1 for backup).

Every character possesses a special finish animation when defeating an enemy (Most of these finish moves are based on a character's special attacks seen throughout the manga storyline, or some other notable action). The list below contains every character in the game: