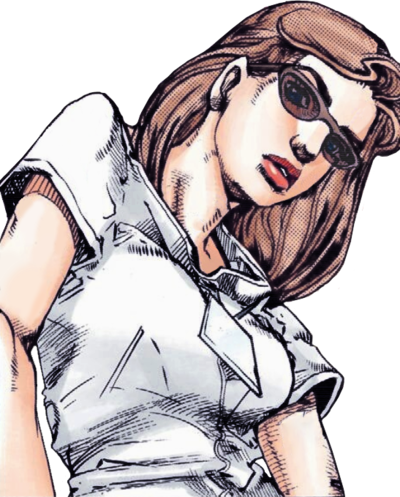 Holy Joestar-Kira (吉良・ホリー・ジョースター, Kira Horī Jōsutā) is a secondary ally featured in the eighth part of JoJo's Bizarre Adventure, JoJolion. She is introduced in the ""Paisley Park" and "Born This Way"" story arc.

Holy is a world-renowned ophthalmologist from T.H. Medical University Hospital and associate professor at Morioh's T.G. University. She is the daughter of Joseph Joestar, wife of Yoshiteru Kira and mother of Yoshikage Kira and Kei Nijimura.

Holy is a middle-aged woman of Western ancestry. Still having a youthful look, Holy has long brown hair. She is depicted with green eyes in the colored manga.

The series is known for alternating colors between media, the information presented below may or may not be canon.
Skin(Fair, berry red lipstick.)
Hair(Brown)
Eyes(Green)
Outfit
(White hat, black cape over a pink hoodie, periwinkle undershirt and leggings with white plates, golden-yellow and magenta accessories.)
Nurse's Uniform
(White scrubs, purple-brown shoes, gray lanyard.)

Holy used to be a dedicated and loving doctor 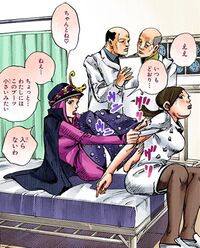 Because of her brain damage, Holy may even mistake people for objects (e.g. a nurse for a shoe)

Flashbacks at different periods show a gradual deterioration of her mental state. When she saved Josefumi Kujo, Holy acted normally.[6] When Yasuho was 13, she displayed mild symptoms as she approached Yasuho out of the blue and offered insightful remarks, although it made little sense to Yasuho.[7] At the time Josefumi and Kira were cultivating the Locacaca, she had trouble differentiating Josefumi from Kira but when reminded of it, she somewhat returned to her senses.[8] Holy shows a certain fondness for reading. At one point in the past, Holy recommended the novel The Rose of Versailles to Josefumi,[9] but by the beginning of the series she seems to have regressed to looking at racy magazines.[10] Soon, her condition and mental state worsen to the point she tries to eat her own fingers off and can't seem to recognize people anymore.[11]

In her rare moments of relative consciousness, Holy demonstrates that she's knowledgeable, wise and insightful. After meeting with Yasuho, Holy does notice the girl's Stand and correctly guesses that she can be a valuable ally to her son and shows a belief in Fate.[12] When she meets with Josuke, she is able to reveal practically everything she knows about the Locacaca Organization, has the presence of mind of bringing him to the Locacaca6251's secret vault to administer it, and gives a crucial hint to Josuke in order to approach Satoru Akefu without pursuing him.[2] In the past, she was shown to be a compassionate, dedicated doctor who was determined to save people, at one point doing everything in her power to save a dying Josefumi and imploring Kira to help save him.[6] Even when she's mentally ill, Holy is quite amiable and likes to have conversations with everyone. 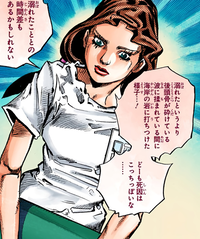 Born Holy Joestar, she is the daughter of Joseph Joestar and Suzi Q. She is also the mother of Yoshikage Kira, making this Kira a direct descendant of Johnny Joestar. Holy Joestar-Kira is revealed to have been an ophthalmologist who worked at the T.H. Medical University Hospital from 1998-2008 before becoming a guest professor at TG University.[1]

In the late 1990s, Holy was serving as an emergency room doctor when the young Josefumi Kujo was brought into the hospital after an accident that has left him with a possibly fatal blood clot. She asked her son to use his Stand Killer Queen to remove the blood clot, saving the young Josefumi's life. This would leave Josefumi indebted to the Kira family, leading to Yoshikage and Josefumi scheming together to steal a branch of the Locacaca Tree to possibly cure Holy of the mysterious illness she suffers from, and ultimately to the creation of Josuke Higashikata from the bodies and minds of Yoshikage Kira and Josefumi Kujo.[16]

Holy created the hidden Locacaca lab at TG University Hospital. However, she failed in her research.[15] Holy witnessed the Locacaca Organization infiltrating the hospital and she began to suffer from memory losses and blackouts, gradually weakening over time. Nonetheless, Holy managed to learn a lot about the organization.[2] It is shown that already when Yasuho was 13, Holy was showing symptoms of dementia. Holy met Yasuho after Yasuho performed a suicide attempt, and offered her cryptic advice about not overlooking things and only look inward.[17] She is currently a patient at the TG University Hospital, which is the reason she was not present to identify her son's corpse after he died. 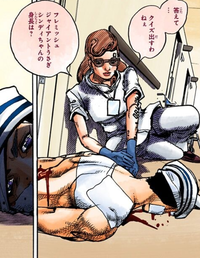 After Wonder of U flees, Josuke walks over to Holy's room and takes a moment to think about her, Rai, and Kei.

After the defeat of Tooru resulting in no Locacaca remaining, Holy stays comatose in the hospital with the equivalent exchange now gone forever.