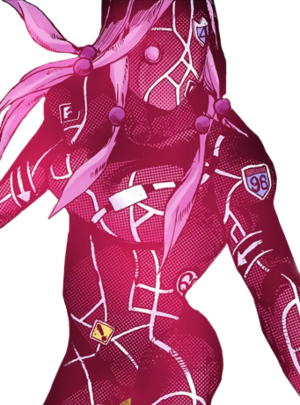 Paisley Park (ペイズリー・パーク, Peizurī Pāku) is the Stand of Yasuho Hirose, featured in the eighth part of the JoJo's Bizarre Adventure series, JoJolion. Its technology manipulating abilities allows it to effectively gather information and guide Yasuho down the right path.

Paisley Park is a humanoid Stand of a feminine figure and a height slightly above Yasuho's; usually appearing two-dimensional by occupying the place of Yasuho's shadow or spread across any surface. It has Yasuho's hairstyle, and a blank face save for one round eye on its right with three bold eyelashes, and a semi-functioning mouth underneath what would be its skin. Its face and body are covered by various road map symbols.[1]

It later appears three-dimensional after it is discovered by Yasuho. When the Stand changes its shape, its round eye always stays present.[2]

Paisley Park is pink in the colored manga.

The series is known for alternating colors between media, the information presented below may or may not be canon.
Body(Rose red body with white lines)
Hair(Pink hair with magenta hair clips)

It has an independent personality, since it first manifests unconsciously by Yasuho in order to assist Josuke by bringing him to safety from his pursuer. Paisley Park is loyal to Yasuho and helps her as well as her friends to reach destinations or bypass security. Its primary objective is protecting Yasuho which doesn't change even after it is discovered by Yasuho herself.

The Stand can be aggressive when protecting its owner if she is threatened, as shown when it allows Yasuho to flee from the vehicle of kidnappers by twisting the ankle of the driver, causing the car to crash and the kidnappers to smash headfirst through the windshield.[3]

Paisley Park has been described by Yotsuyu Yagiyama as a long-range Stand, resistant to conscious control and of low physical potency. Paisley Park isn't suitable for direct confrontation, but it is highly automonous and able to assist its user and allies constantly through various ways.

Josuke being guided by Paisley Park via GPS

Paisley Park's primary ability involves assisting individuals significant to Yasuho in finding and reaching destinations more expediently, or escaping perilous situations. Paisley Park has for example manipulated a phone's GPS application,[4] the results of a web search engine to enhance the efficiency of her investigations[5] and instigated a chain of events allowing Yasuho to bypass security clearance through mistaken identity.[6] Paisley Park can also separate from its user and go far away to help another ally in need.[7]

When Yasuho discovers Paisley Park for herself, it displays time-limited choices on her cellphone or laptop.[8] After selecting an option, the Stand provides her with the item she asked for which then comes in handy later. For example, the choice of flashlight results in Paisley Park giving it to Yasuho, which then illuminates the location of something else she ends up needing a few minutes later. The Stand offers a choice whenever Yasuho needs to solve a problem, despite whether or not she's aware of what's going to happen, but doesn't act when Yasuho is too slow to choose.

Although it mainly resides in her cellphone, Paisley Park enables Yasuho to interact with various electronics at a level beyond humanly possible.

Paisley Park can hack into various electronic devices with ease and use them to help Yasuho in her investigations or any other activity she is focused on, bypassing any security they may have. For instance, it could break into the data servers of the local police to identify Dolomite by linking a tooth to medical records and dental prints.[9] It can also travel through computer networks from Yasuho's mobile phone in order to interact with other systems without being near the hardware. This particular ability is portrayed as Paisley Park going through endless corridors full of doors and breaking locks. At a more basic level, Paisley Park can delete/wipe files such as images or videos from other people's phones if Yasuho wills it.[10] Paisley Park also seems to be able to "copy" certain technological abilities. For instance, she is shown using her hand as an X-Ray to find the pieces of rock in Yasuho's face. [11]

Somehow, Paisley Park could also transport one of Soft & Wet's invisible bubbles from a cell phone connection, bringing the bubble from one place to another.[12] A somewhat similar occurrence happened before as it was shown that Yasuho could also make a 3D representation of the picture of a car partially emerge from her mobile phone's screen.[13]

Paisely Park morphing its head into a globe

Paisley Park can freely change its shape. It can shift from a three-dimensional humanoid form into a flat, shadow-like figure,[14] or even a formless puddle. This ability isn't limited to shape alone, as it was able to turn its head into a globe,[15] changing usual road map symbols into the map of the Earth, and then into a map of the town.