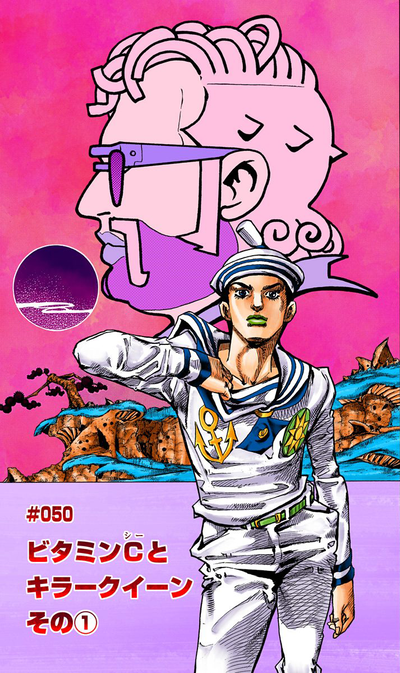 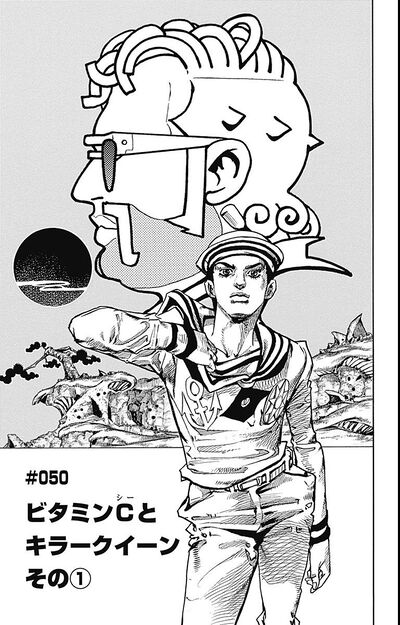 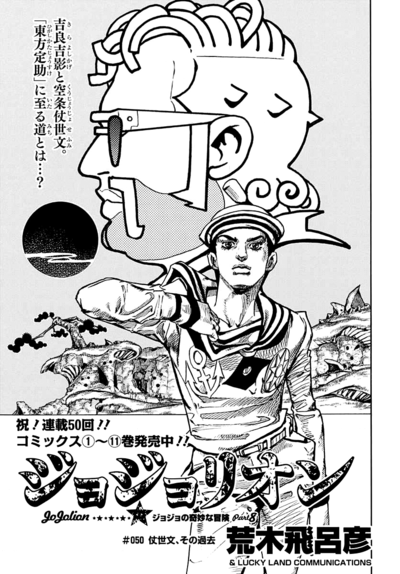 A flashback details the first meeting between Josefumi Kujo, Holy Joestar-Kira and Yoshikage Kira. On the beach, Kiyomi Kujo gets hit on by two men, who let her go when they see the toys besides her. Kiyomi shouts at her son Josefumi, then a little boy, not to play in the rocks. Shortly after, she starts a telephone call with her boss, making up an excuse for her absence at work, but her boss fires her anyway.

When Kiyomi turns her head, she notices that Josefumi has disappeared. Coming closer to the rocks, she sees Josefumi drowning in the waves. Seeing the desperate look of her son, she first hides and lets Josefumi drown before changing her mind and saving him. Josefumi is brought to the hospital where Holy asserts that Josefumi has his occipital bone crushed due to hitting the rocks and asks her son Yoshikage to take care of a blood clot. Yoshikage uses his Killer Queen's miniaturized Sheer Heart Attack to save Josefumi, and leaves, seeing that Kiyomi's feelings are not entirely that of relief.

Around 2009, former star baseball player Iwakiri Atsunori exchanges 200 million yens for a Locacaca fruit with Aisho Dainenjiyama, who explains the equivalent exchange property of the fruit. After weighting the tree, Aisho departs with the money and Iwakiri eats the Locacaca fruit. Unbeknownst to both, they are spied on by Yoshikage Kira, who explains to a then teen Josefumi Kujo that Iwakiri's injured his shoulder, nearly destroying his career, and that Aisho approached the baseball player to strike a deal. Meanwhile, Iwakiri's first pitch in his game reaches 162 kmph, indicating a full recovery. Kira then announces that he's going to steal the miraculous fruit, and proposes a cooperation with Josefumi under the pretense that the fruit is worth a lot of money. However, Josefumi already knows about the Rock Disease affecting Holy and accepts out of gratitude for her and Kira. Josefumi proposes not to steal the fruit itself, but to instead some branches from the Locacaca tree. He then explains the concept of grafting to Kira and demonstrates his ability to graft plants thanks to his Stand. Kira and Josefumi then stalk Aisho in order to steal the branches.

Author's Note
“
I saw a "Kesaran Pasaran" in Yoyogi Park. It's an unidentified creature. I wish you a happy new year.
”
—Hirohiko Araki
“
代々木公園で「ケサランパサラン」を見た。未確認生物ですけど。良い年でありますように。
”
—Hirohiko Araki