Every Day Is a Summer Vacation, Part 1 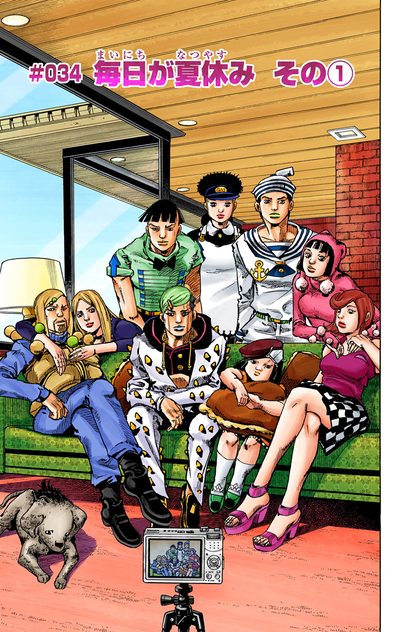 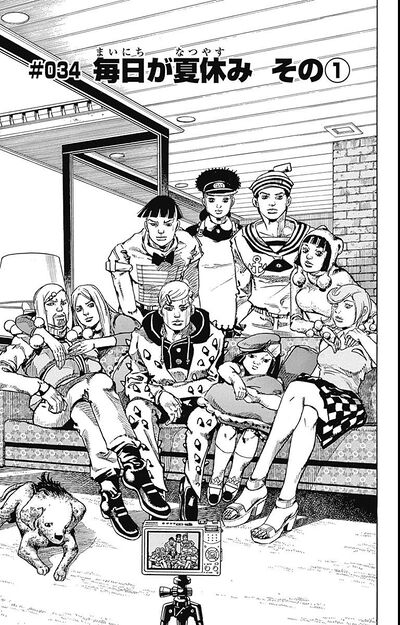 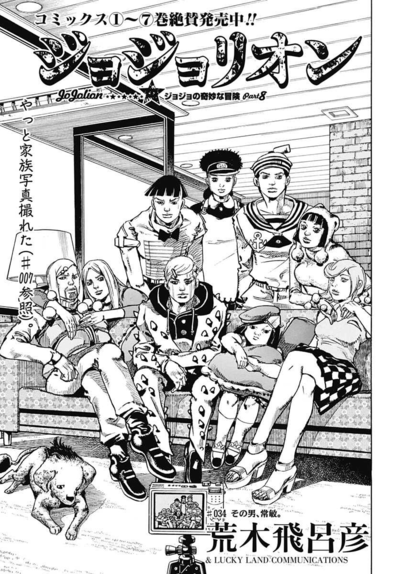 Every Day Is a Summer Vacation, Part 1 (毎日が夏休み その①, Mainichi ga Natsuyasumi Sono 1), originally That Man, Jobin. (その男、常敏。, Sono Otoko, Jōbin.) in the UJ release, is the thirty-fourth chapter of JoJolion and the eight hundred eighty-first chapter of the JoJo's Bizarre Adventure manga.

Previous events are recapped - Additionally, Josuke gives his provisional age as 19; and he affirms the likelihood that the spiky fruit held by Yagiyama and touched by Jobin contains a cure for the Rock disease.

Joshu, Daiya, Hato and Kei display tacky souvenirs gifted to them by Jobin after his trip to south-east Asia (a plastic lobster; a coconut ashtray; a T-shirt featuring a red green sea turtle and an umbrella reading "fighting spirit"; and a replica Oscar statuette, respectively).

Josuke expresses that he should learn how to raise his stag beetle. Joshu goes ahead of him to Jobin's room, which reveals a large shelving unit filled with display cases of exotic beetles; as Jobin handles one of a group of robotic figurines. Jobin again quotes Aida Mitsuo before telling Josuke that stag beetles feed on protein. The scene fades to an earlier moment outside where Tsurugi teases Iwasuke.

Josuke confronts Tsurugi, explaining that seeing King Nothing indicate the smell of the spiky fruit on Jobin's handkerchief, and since Norisuke trusts Jobin more than he requires any information, he must ask him for information on Jobin's Stand in order to corner and question him. Tsurugi is reluctant to go against his father but Josuke pressures him successfully, reminding him of the Rock Disease.

In the now, Jobin explains to Josuke that stag beetles are predators and should be fed insects in order to keep them strong. Josuke then expresses his wish to see the many insectariums in which Jobin keeps his own collection of stag beetles.

In the flashback, Tsurugi explains that his father's weakness are stag beetle. Being obsessed with them, he is bound to reveal himself if he defeats his pride in his beetles.

Jobin proudly exposes his many insects to Joshu and Josuke, exposing their short but existing intelligence. Josuke then points at one beetle in particular, wondering that his own stag beetle could beat it. Jobin's pride is hurt and he challenges Josuke at a stag beetle fight, which Josuke accepts. Jobin then sets up an arena delimited by soft rush plant and explains the rules. Each round lasts 45 seconds; whichever beetle runs away, is pushed out of the ring, dies or is lifted for 10 seconds loses; interfering in the fight is prohibited and is a forfeit. Josuke then exploits the mood to propose a bet, which Jobin accepts, wagering another Hercule stag beetle. However he first gives his beetle fighting spirit by putting it against a Japanese hornet. Surprisingly, the beetle cuts the hornet in half without difficulties, and Jobin asks what Josuke will bet?