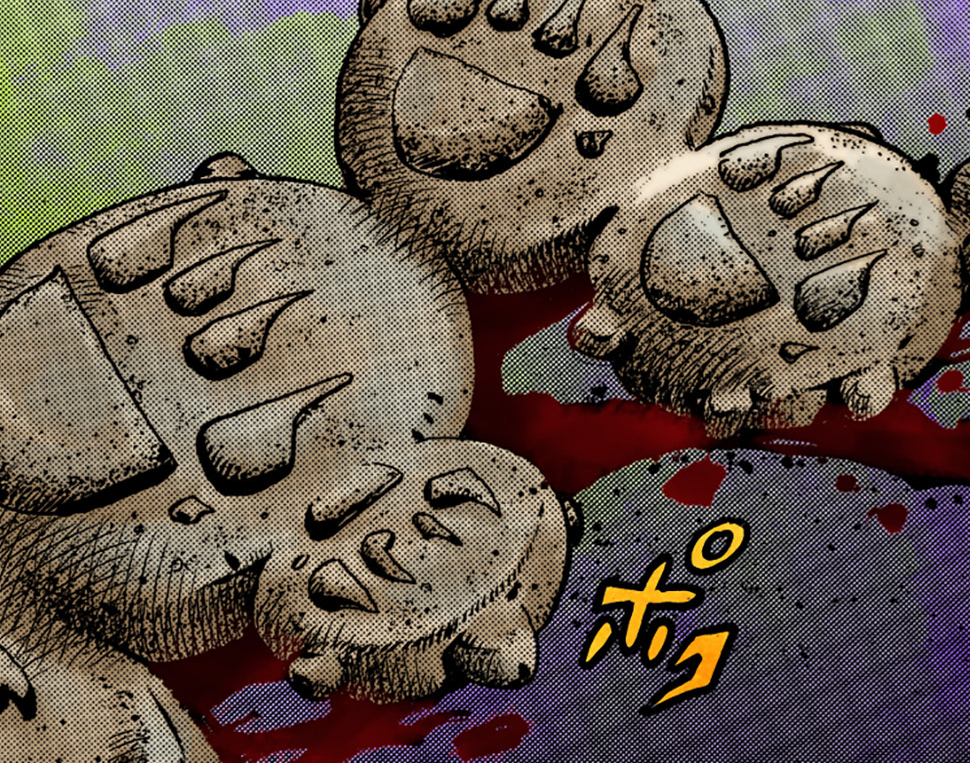 Wonder of U
Toru

Drowned in a pool

Obladi Oblada belongs to a certain species of Rock Organisms. During Wonder of U's evacuation, it releases this leech-like organism on Josuke.

Each Obladi Oblada takes on the appearance of a small, flat, round disc, resembling a cookie, with six stubs protruding from its edges. It visually has a four-toed paw print on its back. When duplicated, the bodies seem to link together via their stubs. Akefu calls Obladi Oblada an insect, but also notes that its species aren't technically insects, as they lack a three-segmented body or jointed legs.[3]

Obladi Oblada is a parasitic Rock Organism, as it feasts on the blood and bodily fluids of other organisms. It is shown to be virtually motionless, moving only whenever attacking or being attacked.[3][4] It is shown to protect its master, Wonder of U,[3] and it can be inferred that it is subservient to Toru as well. Obladi Oblada's species target any sort of animal from above or below.

Obladi Oblada is afraid of water, as it prefers to live on dry areas[3] and is shown to shriek whenever it's submerged underwater.[4] As a Rock Organism, it also hates storms and rising waters.[1]

Despite its small size, the organism is shown to be relatively strong enough to deflect Soft & Wet: Go Beyond's bubbles.

Obladi Oblada latching itself onto Josuke

Obladi Oblada can latch itself onto its victims, like a tick, via an extremely sticky substance that is secreted from its underside. This is effective in order for the Rock Organism to burrow into the victim's skin and absorb their essence. In the wilderness, this creature inhabits a cliff and jumps down on other animals passing beneath it. Once latched, it sucks the body fluids and blood of its victim.[1]

Obladi Oblada is capable of spawning copies of itself at a rapid pace from its victim's blood,[1] to the point of overwhelming its victim within seconds. Attempting to attack or pull off one of the pads spawns more of its bodies, proving any attack against it seemingly futile. When the body multiplies, its copies form out of one of its stubs.

Obladi Oblada originally lived on a dry, sloped cliff.[3] It was acquired by Toru and the Locacaca Organization at some point.

Wonder of U keeps the Rock Insect attached to its cane.[3] While evacuating as Josuke shoots a bubble at it with his finger, Wonder of U releases Obladi Oblada to stop him.

Obladi Oblada deflects the incoming bubble and latches itself onto Josuke's hand, eating at his flesh. Josuke tries to pry the insect off, but to no avail; the organism clings on and spawns duplicates of itself all over Josuke's arm. He tries shooting at the Rock Insect, but Obladi Oblada again duplicates itself, swarming him until it completely covers his body. He then tries to fire one last shot at Wonder of U, but Obladi Oblada spawns some duplicates over his finger, deflecting the bubble. Losing energy as Obladi Oblada continues devouring him, Josuke eventually collapses.

However, Josuke manages to hit Toru with an invisible bubble, which helps decrease the severity of what Obladi Oblada is inflicting on Josuke. He manages to stand up and after quickly consulting a map, finds the shower room of the hospital and dives into a pool, which causes the Rock Insects to drown. They shriek and their corpses surface as they detach from his body.