The Wonder of You, Part 5 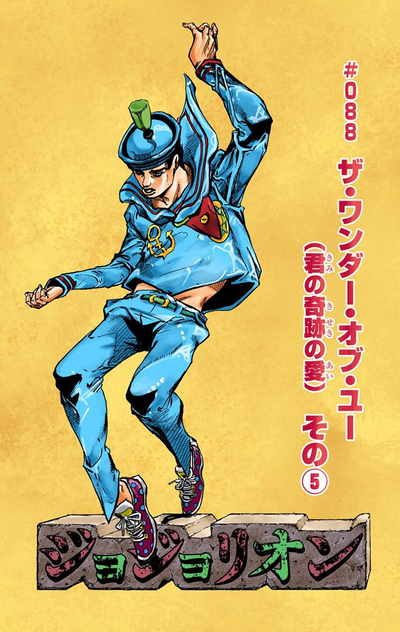 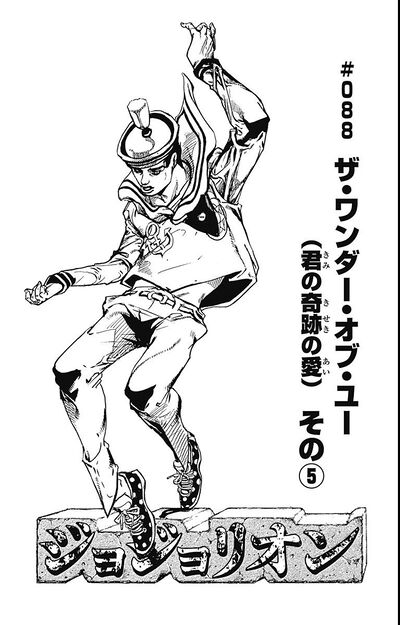 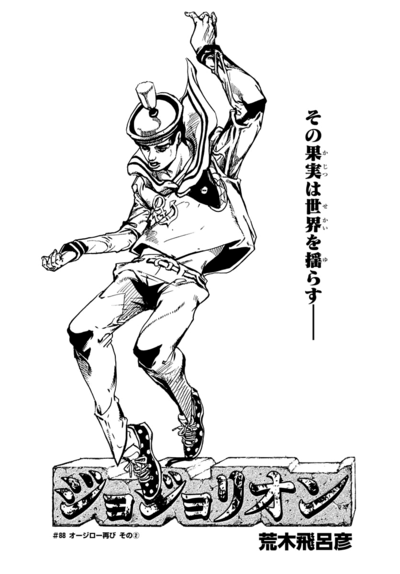 Jobin Higashikata and Tsurugi Higashikata find themselves under attack by Ojiro Sasame. His Stand Fun Fun Fun has taken control of Tsurugi's left hand and the boy cannot scratch its mark off. Tsurugi's possessed hand opens the room's window, smashes his face and yanks itself so violently he is thrown into the window, shattering the glass. To prevent any further injury, Jobin holds onto Tsurugi's left arm which is sticking out of the window.

However, Ojiro is now able to place two of his "markers" on Jobin's hands from the roof. Forcing Jobin to choke his son, Ojiro tells Jobin to give him the New Locacaca Plant or be forced to kill Tsurugi, also saying that he's already sent the recording of the plant to a contact, which will be evidence of Jobin's smuggling and money laundering. Jobin relents and also tells Ojiro that the fruits can be harvested in three days. Ojiro is pleasantly surprised and finally asks Jobin to reveal his Stand to judge its power. Both Jobin and Tsurugi reveal Speed King and Paper Moon King.

Ojiro slaps the origami aside as he didn't ask to see it. But, Ojiro then deems that Speed King looks too dangerous for Jobin to be left alive and he thus forces Jobin to close the window into himself and Tsurugi, driving huge pieces of glasses into their head and neck. Jobin and Tsurugi bleed out next to the window. Entering the room, Ojiro takes the phone and the plant pot. He then smugly tells Jobin that the plant was originally for Holy Joestar-Kira, that the Higashikata Family was never meant to have it and that, as Yoshikage Kira's "friend", he considers the fruit to be a posthumous gift to him. Before leaving the estate, Ojiro also steals a couple of bills from Jobin's wallet.

Ojiro takes a taxi to Maako Kitani's house, complaining about the heat on his way there. Exiting the car, Ojiro then remarks about the hot weather but soon finds out that his own body is starting to heat up to dangerous levels. His fingers, his head and his tongue get covered in blisters and his eye bursts from the heat. Ojiro drops the pot and runs away. Back at the Higashikata household, it is revealed that Jobin and Tsurugi are safe. Tsurugi's Paper Moon King has again tricked Ojiro, making him believe the glass shards on the window frame were way bigger than in reality, allowing them to fake their death. Jobin reassures Tsurugi that the stolen flowerpot must be somewhere easy to find considering Ojiro's state. However, Jobin is still worried about how the knowledge of the Locacaca spread through town.

Maako and her daughter eventually return to their apartment. They hear a mobile phone ringing and thus deduce that Ojiro must be there but he's nowhere to be seen. Maako internally praises Ojiro for his help against the Higashikata family. Her daughter finds the phone on a table by the balcony's jacuzzi and Maako picks up the phone to answer the call. On the other line, Jobin notes that Maako is a woman and must be Ojiro's contact. Worried, Maako tells her daughter to call for Ojiro. Jobin proceeds to explain his Speed King's real ability: to store up heat in any object or precise point of the body and then allow the heat to flow whenever that point is touched. Maako doesn't understand what Jobin is saying, making it clear that she isn't a Stand User and thus Jobin tells her that he's reassured as he is able to simply kill her but spare her family. Maako finds herself under Speed King's influence and heat accumulates on her face, also making her eye burst. Maako falls, and then sinks to the bottom of the jacuzzi, eventually drowning to her death where she reunites with Ojiro's corpse who suffered the same fate. For her part, Maako's daughter is still distracted by her phone.

Author's Note
“
I've started using a video distribution platform. I get very accurate recommendations, how does it know what I like?
”
—Hirohiko Araki
“
動画配信サービスに入った。おすすめの作品、何でこんなに僕の好みがわかるんだ？
”
—Hirohiko Araki