The Wonder of You, Part 3 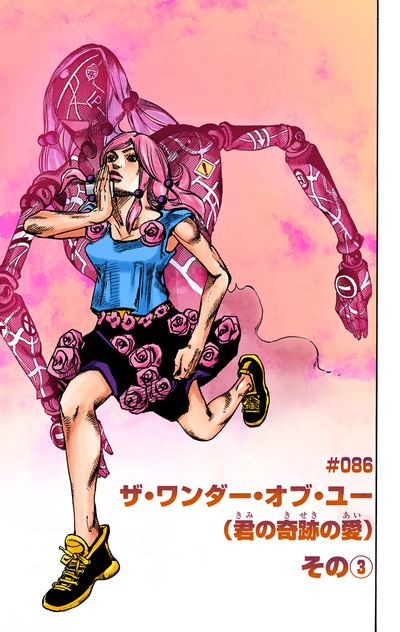 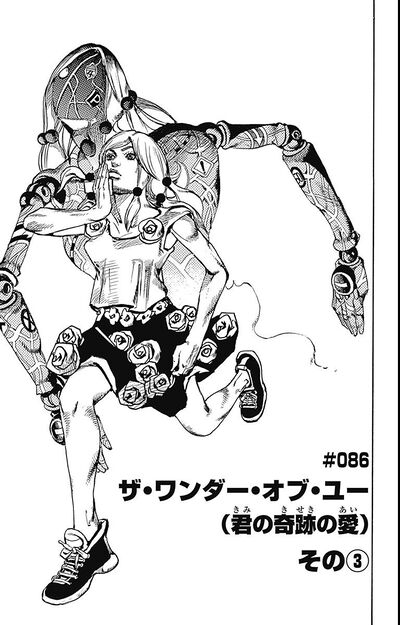 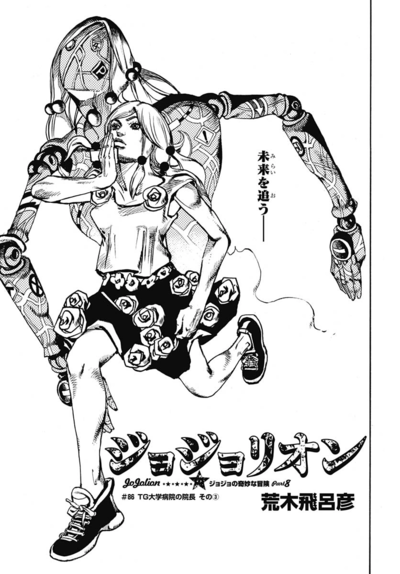 The chase after Satoru Akefu continues. However, Mamezuku's legs have been shredded for mysterious reasons. Mamezuku himself guesses that he's already been under attack from an enemy Stand as soon as he decided to track the doctor and that Akefu is purposefully letting himself be pursued.

Yasuho sees the doctor aboard a bus, prompting her and Josuke to continue pursuing him to snap a picture to identify him against Mamezuku's suggestions. Yasuho and Josuke run up to the bus, expecting it to stop at the entrance of the hospital and allow her to take a picture. The bus rolls over a cigarette but which goes flying but then pierces Josuke's hand. Twisting in pain, Josuke warns Yasuho of the danger but she persists; when the doctor turns his head to look through the rear window, Yasuho sees her opportunity but a car suddenly appears and threatens to crash into her. Thankfully, Josuke uses Soft & Wet to cushion himself and Yasuho, avoiding to take any damage.

The doctor has escaped for now, as the trio decide to not push their luck any further. Unfortunately, one of the patients who was taking a walk outside has been splashed with Josuke's blood. Angry, the patient tries to start a fight with him and throws a punch, which Josuke stops with his bubbles. However, the patient's neck suddenly snaps and the man collapses to the ground, attracting the attention of everyone outside the hospital. Mamezuku first tells Josuke to not touch the man as it seems something has been repelled from Josuke to the now dead man, but another problem arises as it seems Josuke has just killed him. Josuke risks being arrested, but then Toru comes forth again, reassuring Yasuho that he will testify for Josuke.

The story then jumps to 5 days 1 hour 5 minutes before the harvest. On the roof a condominium, Ojiro Sasame enjoys a jacuzzi and invites his sugar mommy Maako Kitani to join him. Maako declines as she only came to pick up some material. Ojiro then steals some money from her bag as her back is turned. Maako gets herself some champagne and then starts to rant about Mitsuba Higashikata, recalling her insult. She then diverts her attention to the Higashikata House and the land around, saying that it is worth a fortune. Maako dreams of building a casino on the land instead of a measly orchard but complains that despite her efforts to get close to Norisuke Higashikata IV, Mitsuba keeps being a thorn in her side. However, she finds the rumors of Kaato Higashikata having killed someone to heal her son Jobin to be interesting.

When Ojiro mentions her possessions such as the stadium, Maako dismisses them and explains how low the value of the terrain is. Ojiro's interest in the rumor awakes and Maako then actually explains that the ground of the Higashikata estate is rumored to have healing properties. Hurrying to pick up her daughter, Maako then accidentally steps on Ojiro's hand, revealing his bitten off fingers. Although he reassures her that it is no big deal, Ojiro then privately recalls the healing properties of a fruit, reminiscing what Yoshikage Kira had been doing before his death.