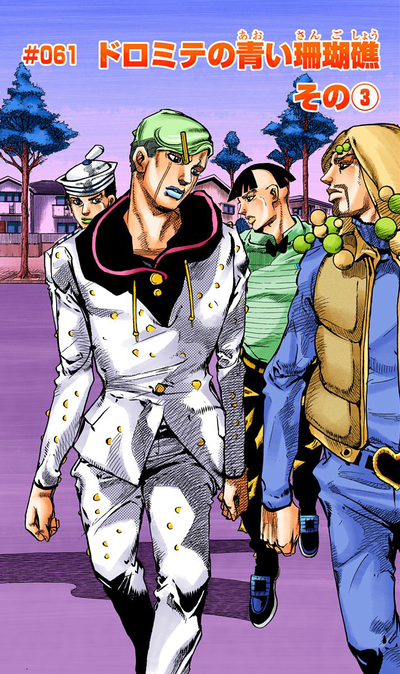 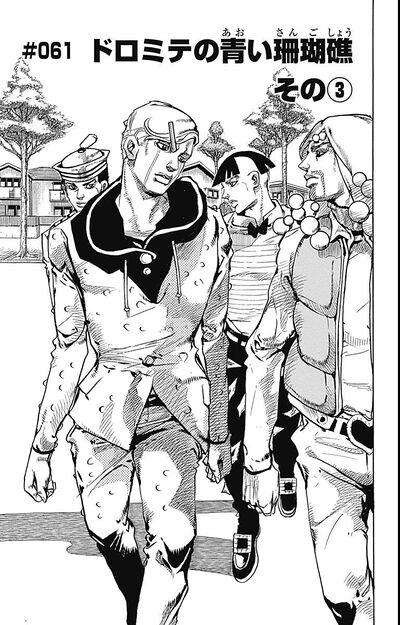 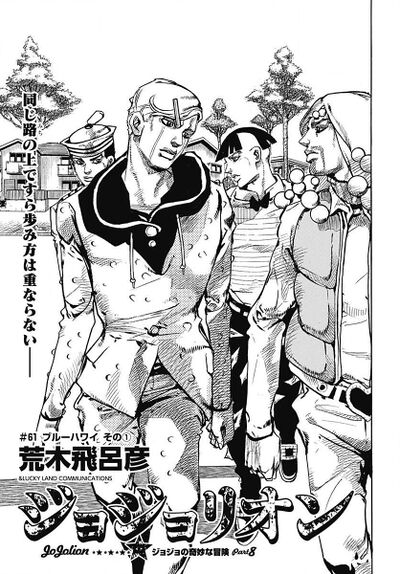 Dolomite smashes his mouth against a rock, causing one of his teeth to fly out. Jobin compliments the Rock Human on his choice, stating that everyone needs to overcome obstacles to be happy. Showing the photo of Josuke again to Dolomite, he announces his intention to stop him from finding the unknown ally who will let him find the Locacaca. Jobin carefully puts Dolomite's tooth into an envelope, as Dolomite asks if it is fine if anything dire happens to Josuke or even Morioh as a whole because of his Blue Hawaii, but Jobin doesn't care.

Back to Josuke's predicament, the mature woman who almost drove into Josuke has become feral like the boy. Josuke sees that the boy has become conscious again and understands that the tooth is important in order to fight his enemy. However, the feral woman immediately attacks Josuke, forcing him to move away. The woman falls into the ground face first, and doesn't listen to Josuke's calls. Josuke begins to work out that the influence of the enemy Stand is passed from person to person through touch, and thus he needs to avoid touching the woman or even her blood.

Slowly retreating, Josuke uses a trash can's lid as a shield then Soft & Wet bashes the woman through it. But even if Josuke tries to run away in search of the user, the feral woman pursues him with surprising speed. Josuke has to jump up a scaffolding to avoid her, who doesn't see Josuke anymore and continues to bash her head against a wall. Thinking himself safe, Josuke doesn't spot the drop of blood landing on the scaffolding, and is detected by the woman as soon as he walks on it. The feral woman grabs Josuke's sneaker and climbs up, trying to attack him again. Josuke is forced to abandon his shoes and jumps down, but the woman is soon onto him, fortunately grabbing him through a plastic sheet. Yet Josuke is still trapped, the woman won't let go and the sheet is already tearing, letting her mouth through. Josuke saves himself by using a shovel to bash the woman into the inside of the building through a window and he is free to leave. He still hears her trying to punch through the wall, and wants above all to avoid being controlled.

Inside the building, three hoodlums observe the mature woman bashing her head against the wall. Puzzled, they decide to rob her, and the one girl among the thugs films the whole event with her camera.

Josuke is running in the streets, and decides to call for an ally. He first tries to call Norisuke, but he changes his mind, as many members of the family were near him when they talked about the plant appraiser and the enemy could be connected to the Higashikata Family. Thus, Josuke calls Yasuho, who is happy to hear of him. Josuke explains his situation and instructs Yasuho to go investigate the tooth back at Ryūshō Temple bus station and be sure to not touch it. Yasuho departs immediately to help Josuke.

Josuke finds himself in the middle of a crowd. He is startled when a dazed woman stumbles toward him. He also suddenly sees a man ominously walking toward him and takes a defensive posture. But his suspicions are wrong, both are normal people passing by. However, Josuke is still in a dangerous position, realizing the advantage the Stand attack has in large groups of people.