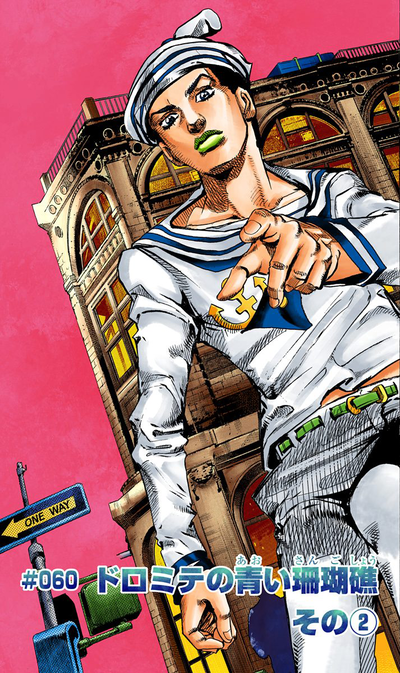 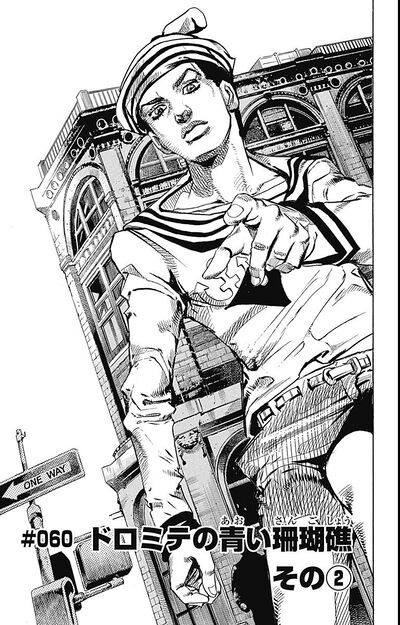 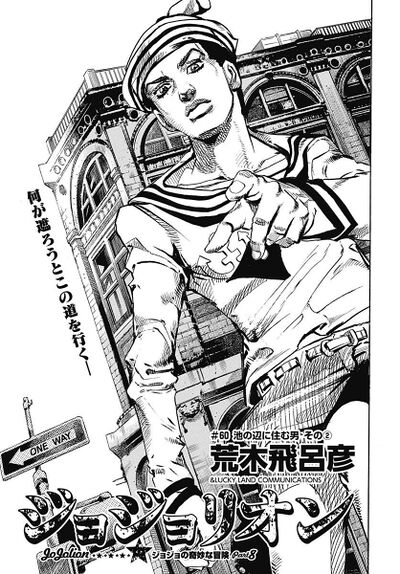 In an undefined time in the past, a man and his girlfriend were laying down on the grass. The man told his girlfriend about dreaming of being stranded together with her before going back to reading his book. He suddenly realized his companion was wandering near an electrical disconnector and, panicking, rushed to block her path and save her from electrocution. Unfortunately for the man, he accidentally touched the generator. Electrocuted, he lost all his limbs and partially crumbled while seeing his girlfriend wander away without minding him.

In the present, that same man claims that he's now happy living at the Mutsukabe Shrine near the pond, and expresses disinterest in any other activity. Jobin doesn't yield and then shows a photograph of Yoshikage Kira and Josefumi Kujo. He explains that the two of them used a new form of equivalent exchange with a modified Locacaca and a new man, Josuke Higashikata, was created. Jobin pleads the man to help him with success, as the man, whose name is revealed as Dolomite, becomes interested and reveals his Stand.

Meanwhile Josuke is watching the strange courier boy slowly coming back to him. Suspicious, Josuke looks around him but spots nothing, and orders the boy to stop coming toward him, asking questions about who exactly gave him the letter. The boy doesn't react and continues to walk toward Josuke until he bumps into a bus stop sign. Strangely, the boy continues to try to move forward and repeatedly crashes his face into the sign, nearly popping one of his eyes in the process. Shocked, Josuke approaches to help the boy when the latter manages to slip past the bus sign and begins to attack Josuke. Soft & Wet trips the boy while Josuke avoids touching him by stepping onto the road. Despite being covered in blood, the boy still stands up and relentlessly pursues Josuke. A sudden car gets between the two, and the driver, a mature woman, chastises Josuke for staying on the road. As she complains about almost running him over, the boy bumps his head into the car's window while Josuke suspects that the tooth in the letter is connected to that phenomenon. The woman opens the window to yell at the boy too, but he then creeps into the car to reach Josuke and touches the woman while doing so. Soft & Wet plunders some coffee and spills it into the boy's eyes to blind him and Josuke uses that distraction to take the woman out of the car. The feral boy trips while trying to get out of the car and when he stands up again, Josuke is nowhere in sight. The boy collapses as people gather to oversee the incident.

Josuke hides behind a wall and observes the boy from afar. He's plundered the tooth with a bubble and begins to think about the attack. Wondering who would attack him, as Tamaki Damo had no other ally with this kind of power and there is still no gain in attacking him as he hasn't found the Locacaca yet, Josuke suspects that someone wants to prevent him from reaching the plant appraiser. As Josuke realizes that no one should be aware of his search for the plant appraiser, his thoughts are interrupted when he see the same mature woman become feral as well, beginning to menacingly creep toward him from the top of a wall.

Author's Note
“
There's this old man in my neighborhood who sounds like a kitty cat when he sneezes. I don't get it.
”
—Hirohiko Araki
“
近所のオヤジで、くしゃみをする時の発音が「にゃんこちゃん」と聞こえる人がいる。つっこめない。
”
—Hirohiko Araki