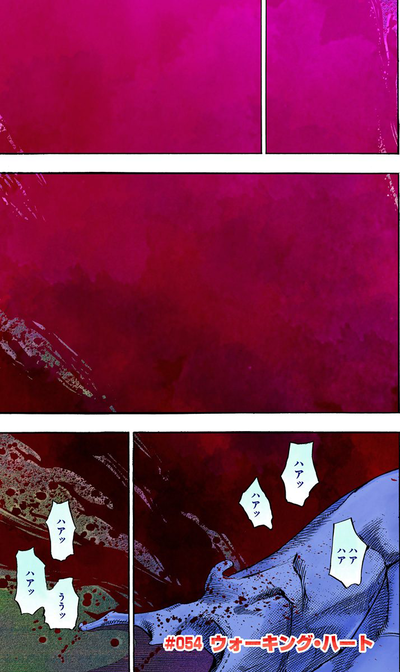 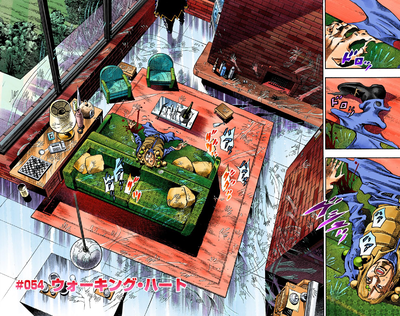 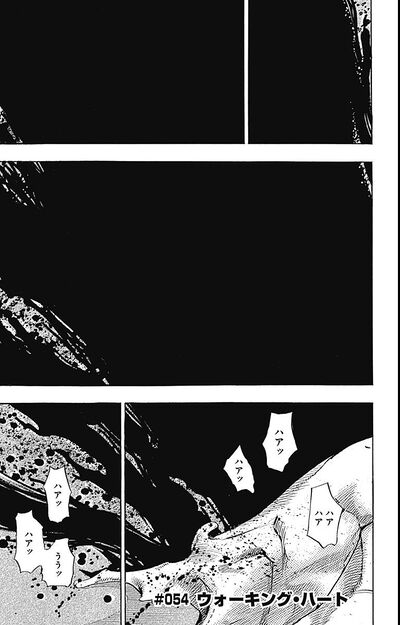 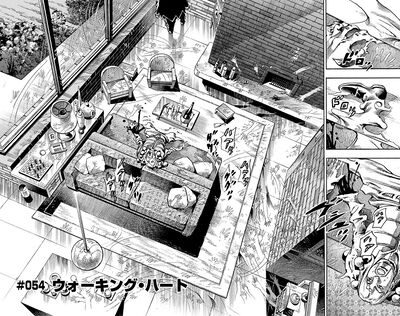 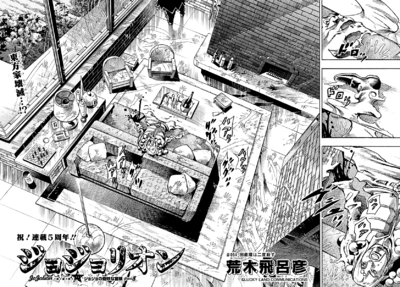 At the Higashikata's, the whole family room is covered by Vitamin C's handprints and Norisuke is powerless as he observes Damo. Damo then throws several fishes into Norisuke, who swim in him, and Damo gleefully shoots the whole scene with his phone. Returning to the point, Damo then asks Josefumi Kujo's whereabouts, certain that he survived. When Norisuke tells Damo he doesn't know Josefumi, the latter enters a brief rage, inserting more fishes into Norisuke and reveals to him that he is going to slaughter his entire family if he doesn't reveal where Josefumi is. Torturing Norisuke again, Damo calls Hato to the family room. Hato still cannot believe that Damo is harming her family despite Josuke's explanations. Meanwhile, Norisuke cannot support the idea of his family getting killed and remorsefully reveals that Josefumi Kujo could be Josuke, elaborating to the incredulous Damo that he was found near the springs where Yoshikage Kira died without memories and that the Locacaca's power may have been involved.

Hato barges into the room, asking Damo what he is doing, but he softens her and kicks her out of his way, going to the foyer to confirm that Josuke is Josefumi. Damo is now certain that an equivalent exchanged happened, and attacks Josuke with Vitamin C. Josuke uses Soft & Wet to counterattack, but it has become so softened that he is promptly defeated. Damo, fascinated by the Locacaca's new application, cuts off Josuke's liver and prepares to cut his throat. However, Damo suddenly spots Hato outside of the house, a bubble having plundered her away through the chimney. A heartbroken Hato then repeatedly impales Damo with a stretched heel, retracting it back faster than Vitamin C can soften it. Taken by surprise by her power, Damo takes cover in the family and begs Hato to stop as she summons her Stand and uses her heels to climb to the roof.