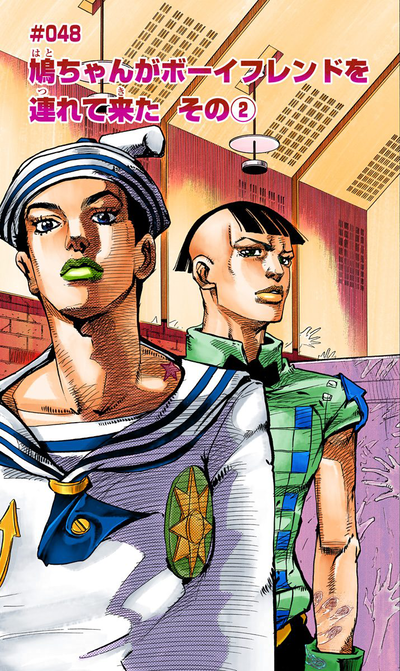 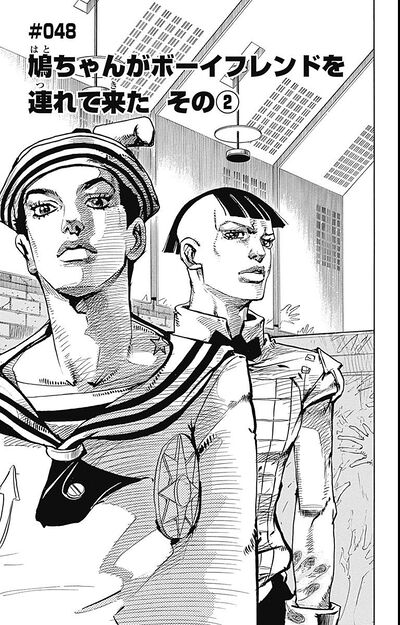 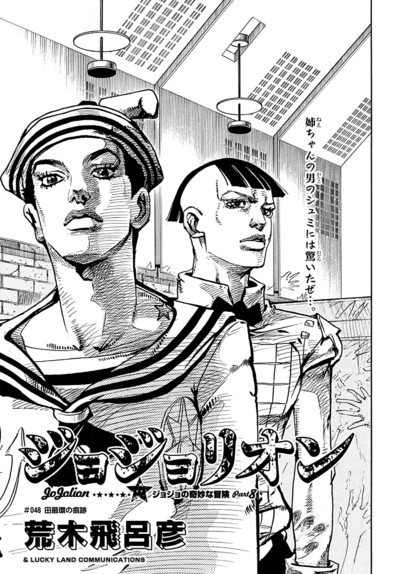 Josuke then announces that he'll go out for a bit, and Norisuke asks him before that to get Nijimura, who's gone to the foyer and isn't answering. At the same time, Damo asks where is the bathroom, and Joshu indicates the door on the right in the hallway. In the foyer, Josuke spots Nijimura's dish towel on the floor then traces of Nijimura, as if she's slipped into the walls. Meanwhile Damo enters the room on the left instead and gets out, which Joshu notices. Joshu go examine the room where the washing machine and the security camera recording equipment are left. The locker protecting the camera equipment has been broken, as well as the hardware inside. Meanwhile the fax is finally printed and it is revealed that the man on the photo is none other than Tamaki Damo, using the name Josefumi Kujo. Daiya notices the fax while Joshu opens the locker door to look further inside it, but his hands slip inside the handles. Joshu then trips when he tries to free himself and hits his head on a nearby faucet it opens and the tap water goes through his head; Joshu is powerless as he and his Nut King Call are melted and drained into the faucet. Meanwhile Daiya, who is near blind, can only read the name on the fax and doesn't let the others see what is on the document. However Hato notices Damo's photo and asks to examine the sheet, to Daiya's refusal. Daiya runs to the next room to give Josuke his fax, but when Josuke looks at her, she's collapsed and is melting on the floor. Norisuke and Hato are wondering what everybody is doing as Damo returns to the family room.