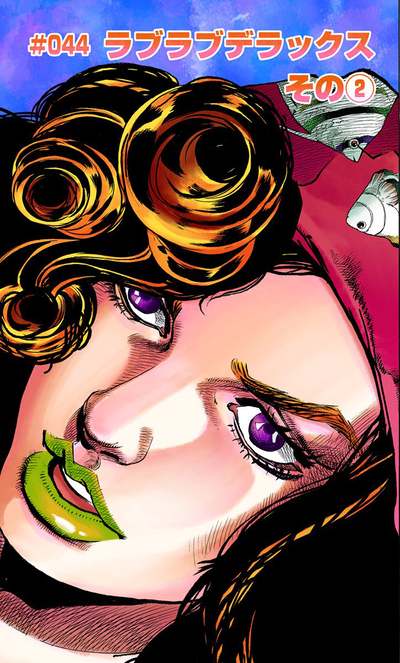 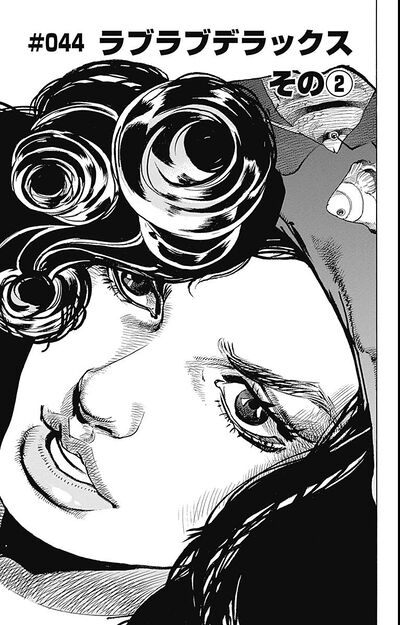 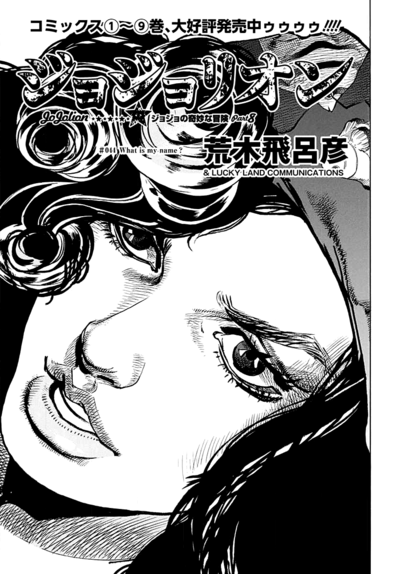 Love Love Deluxe, Part 2 (ラブラブデラックス その②, Rabu Rabu Derakkusu Sono 2), originally What is My Name? (What is my name?) in the UJ release, is the forty-fourth chapter of JoJolion and the eight hundred ninety-first chapter of the JoJo's Bizarre Adventure manga.

In downtown Morioh, Josuke observes a pair of street performer impress a crowd with their ball-handling skills. Later at a cafe, Karera proceeds to fill her bag with all the free complimentary condiments and have a snack by putting lard, sugar and soy sauce on a slice of bread under Josuke's suspicious eye. Meanwhile, Josuke is in internal turmoil, troubled by Karera's apparently vagrant lifestyle and vulgar demeanor; because of this, he doesn't know how to interrogate Karera in order to learn about his past.

Lost in his thoughts, Josuke notices that Karera has headed inside the bathroom with an old man. He barges in the restroom and interrupts what is revealed to be a hair growth session, causing the man to flee. Karera is upset, as she explains that she uses her Stand ability to grow hair on bald people for money and gets away to cancel the growth. Exasperated, Josuke asks why Karera is in Morioh and debunks some of Karera's false answers, causing her to reveal a glimpse of her family life and explain her views on how to be happy. Josuke, seeing her as his polar opposite, asks her for her phone to secretly investigate it.

Karera is suddenly distracted and antagonizes a pair of customers, causing her to be expulsed from the cafe. Outside, Josuke's quest takes a dramatic turn as Karera calls him "Josefumi Kujo" and further shows a picture in her phone of her, Yoshikage Kira and the aforementioned, thus Josuke acquires a solid trail to his former identity. Meanwhile, Karera uses her power to fish a credit card from the customers she argued with and then figure out the owner's pin code, emptying their account.

Shocked and speechless, he departs with her while the street performers are seen being approached by policemen for their soccer antics. When the policemen try to arrest them, the elder brother uses a Stand ability to cuff one policeman to the second's jaw, and the pair of Rock Humans proceed to follow Karera, their target.