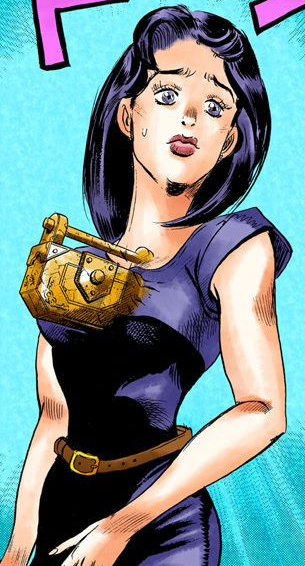 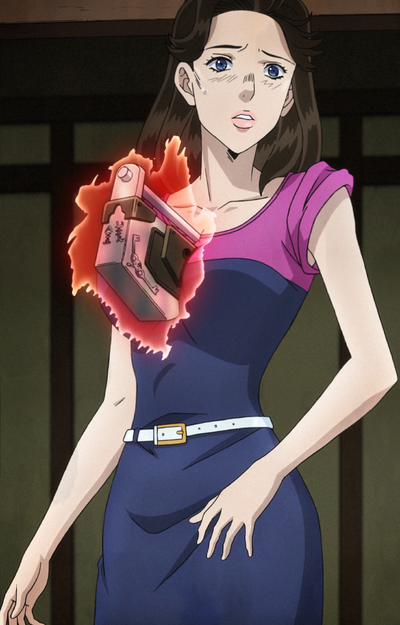 Ayana is the older sister of Koichi Hirose and the daughter of Mr. Hirose and Mrs. Hirose, and she is in her final year at an all-girls high school.[2] She and her mother are attacked by Tamami Kobayashi, who amplifies their guilt with his Stand, The Lock. 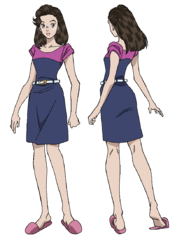 Ayana has dark, shoulder-length hair with two outward curled bangs and thin eyebrows. Tamami Kobayashi thinks that she is "cute in a hot way".[2]

She is first seen wearing a sleeveless dress along with a belt, pantyhose in the manga, and slippers. While on the phone with a friend, she has on a tank top and pants and no shoes. Her hair is tied into a ponytail. When she goes shopping with her mother, she is wearing a long-sleeve, buttoned blouse with a pocket on each breast, a short skirt, and high heels; her hair is not tied up.

Ayana is a kind, polite young lady. She cares for her brother and calls him "Ko-chan" like their mother.[4] She is also seen to enjoy occasionally teasing Koichi.[5] She is kind to strangers, smiling at Koichi's friends[6] and offering Tamami tea when he visits.[2]

She is shown to worry about others when she accidentally harms them and begs for forgiveness when she does.[2] 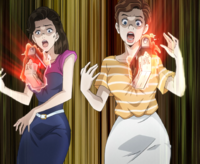 The Lock affecting Ayana and her mom

Ayana and her mom are pushed out of the room while Koichi confronts Tamami.[7] After a loud scream from Tamami, she runs back into the room with her mom to find Tamami bleeding with the knife in Koichi's hand. Unaware that Tamami had actually cut himself in order to frame Koichi, The Lock on Ayana and Mrs. Hirose's chests multiply in size due to their guilt. Ayana cannot bear the heaviness of The Lock and falls to the floor. After Koichi gets his mom to believe in him, Tamami surrenders and removes The Lock from Ayana as well.[4]

Ayana is on the phone with her friend when she notices Koichi run out of the washroom in a panic with only his boxers on. She asks him if he needs anything or wants to use the phone, but Koichi says he forgot what he needed. Ayana calls him weird and giggles to her friend that her little brother was just walking around in his underwear.[5]

Ayana and her mother shopping

Ayana and her mother are out shopping when they stumble upon Koichi and Rohan. When her mom requests to come with them to Kameyu Department Store, Ayana goes along with them. Ayana's presence along with her mother's makes Yukako believe that luck is not on her side, as she wanted to be alone with Koichi.[6]

In the anime adaptation, Ayana and her mother are outside Kameyu when Ayana says that she just saw Koichi holding hands with a really pretty girl. Mrs. Hirose is shocked because Koichi never told her anything.[8]