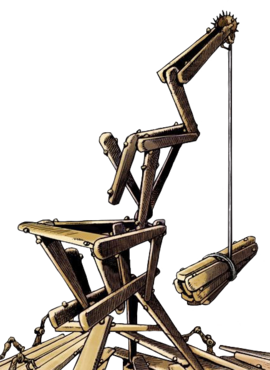 Dododo De Dadada belongs to a specific species of Rock Insects. It aids Satoru Akefu in his battle against Josuke Higashikata and Rai Mamezuku.

The creature has a small spiked body with circular joints attached to its limbs. Its main body appears to have two long spider-like legs. Four more legs are detached from its body, which stick out of the ground or an object that the insect is assimilated to. The ends of its limbs have small claws which act as stingers

Dododo De Dadada is an invasive carnivorous insect, described by Akefu as being a hunter from the mountains. It preys on and eats small animals like rabbits and birds. It shows loyalty to Akefu as it obeys his commands.[3]

When attacking someone, it prefers to aim for their throats.[1] 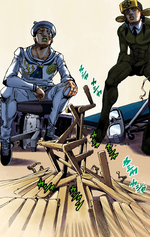 Dododo De Dadada is capable of assimilating with any object such as the floor or a desk to quickly move toward its target. It most notably melds with a Nankin Tamasudare

set, which is a special screen made of loosely woven sticks that can change shape.

It can reshape the sticks of the Nankin Tamasudare set into anything. It first separates the set into individual sticks and string and then recombines the pieces to form a new object. Dododo De Dadada creates a crane using the sticks, carrying a bundle of sticks with the string. It can attack by swinging the string to fire pieces of sticks at its opponent.[2] 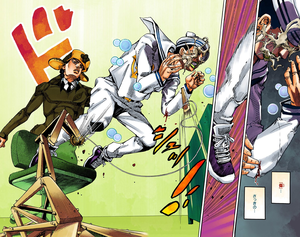 Mamezuku notes that despite its danger, its poison is not that strong.[3]

Dododo De Dadada belongs to a certain undiscovered carnivorous insect species.[2] It is a Rock Insect which Satoru Akefu allies with at some point in time. For unknown reasons, the insects infest the pear orchard of Rai Mamezuku's father with asbestos when Mamezuku was young. Mamezuku witnesses one of the bugs so his father investigates. This act of unintentionally pursuing the head doctor who planned the attack leads to Mamezuku's father getting caught in the flow of calamity, who then dies from a landslide.[3]

set onto the floor of the secret laboratory in TG University Hospital. The insect and the screen meld together into the floor and head toward Josuke and Rai Mamezuku. It causes the sticks from the screen to separate and then recombine to form a crane, lifting a small bundle of more sticks. Dododo De Dadada uses the crane to swing the sticks at Josuke who blocks most of the attack with Soft & Wet's bubbles but gets a wound on his arm.[2]

The rock insect attacks once more, but when Josuke prepares to counter, he extends his arm. As he was previously stung on his arm, his act of extending himself causes asbestos to spew out of his eyes, mouth, and ears. Dododo De Dadada then melds with the surface of a desk and starts climbing up toward Josuke.[3] Mamezuku warns Josuke that the Rock Insect is climbing onto the desk, prompting Josuke to swathe everything that's on the table to uncover it but Dadada has actually hidden beneath the desk and swings another stick into Josuke, cutting his neck.

The Rock Insect keeps eluding him. Worse, more absestos comes out of Mamezuku. When Dododo De Dadada attacks again, Josuke manages to catch the stick with his hand and stands up. As Wonder of U notes the gambit, Josuke has Soft & Wet pummel the desk while protecting its fists with the bubbles to reach Dadada. Mamezuku tears the asbestos off his eyes, enabling him to see that Dadada has already gotten away and is preparing an attack from behind Josuke. He warns Josuke, but it seems that Josuke's tactic has failed. Dododo De Dadada quickly repositions itself and his crane comes down from the ceiling. The string is already around Josuke's neck and the Rock Insect is about to clog up Josuke's throat with asbestos.

Suddenly, Wonder of U realizes that Mamezuku is clinging onto the ceiling, half-turned into wires. Crawling on the ceiling like a snake, Mamezuku is able to extend his finger into a wire and cut down Dododo De Dadada, killing the Rock Insect.[1]